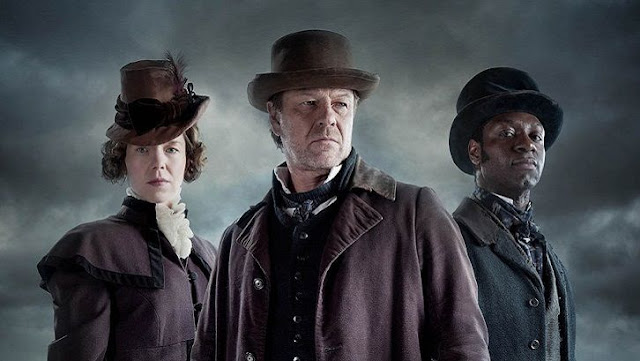 So you watch a show and then it’s like 2 years before the next season. Which is unnecessary, television, very unnecessary

And then you forget about it so wait like 6 months to watch it. And then you’ve got to remind yourself who these characters actually are, what’s happening and why is there syphilis.

So with a hearty “I have no idea what I’m doing,” I’m diving in! Hey why change a habit of a lifetime?

John Merlotte was a policeman in King George’s new police force in London. He died and then Lord Hervey the very very nefarious brought him back to life all Frankenstein-y just 10 minutes before I gave up on this show ever having any supernatural elements

Now back from the dead, we’re focusing a lot on ATMOSPHERE. So it’s all a bit vague and emotive - and it’s extremely good at that. There’s definitely an incredibly powerful sense of Merlot’s confusion, his being out of place, and his confused and painful memories along with his extremely painful memories and experiences. It’s jarring and full of despair and bleakness

He has been detained in Bethlem and has been there for 3 years. He’s near catatonic, hallucinating about the beach and his past and trying to find some sense in his confused and broken mind. The one person who visits him in all this time is Reverend Ambrose, who knew John before he was hanged, but even he can only get a brief reaction.

Until he finally breaks through to sanity - or something resembling it - and manages to yanks his chains from the wall and slit the throat of one of his guards.

I don’t know if undead Merlot is super strong or whether the chains are just poorly maintained.

He escapes and makes his way to Lord Hervey’s old home which is abandoned. At least I think he does. It’s also possible he’s hallucinating this - again atmosphere and theme and ominousness as he pieces together his memories about how Lord Hervey tried to make him into his protege/project and it didn’t go that well (hence Bethlem).

There’s also Lady Hervey as well, Lord Herving’s highly religious wife who was already highly conflicted about her husband’s experiments. The quote is “if he succeeds then we have a world without god”. And he just succeeded - and he’s likely to do more of these experiments: Merlot won’t be the last. She feels guilty and damned: and is pretty much convinced god has forsaken her and Merlot. And she needs him to hunt Hervey down (with a hint that since he’s damned anyway he might as well do a lot of fun murdering).

She also keeps saying “fire, water and ice” for some reason. Hey it sounds dramatic and ominous and I’m pretty sure will never actually be relevant but will damn it sounds ominous and dramatic. Especially since Merlot and Lady Hervey kind of had a thing before death and resurrection and… possible death.

Merlot finds his way back to the poor part of the city and sees his old friend Reverend Ambrose who is surprisingly calm about the whole zombie people coming back to his church. But he’s mainly concerned about Merlot not giving up on god and throwing in a pretty random dig at the local church hierarchy, specifically the Dean of Westminster, who has all the money and doesn’t care about the poor and I really think this isn’t exactly Merlot’s main priority and I’m sure it’s rude to lecture passing zombies about ecclesiastical corruption.

His point is that he should put all his faith in god just because the church is pretty much failing the people. I think dying and coming back is why Merlot’s not a big church fan, not because of the whole church failing the poor thing

Still he has contacts - including a lady called Esther who is happy to get new clothes for him. After some very awkward measuring where he asks for a high collar because of his hanging scars, she deckes him out in… his old clothes rather than his Bethlem rags. She saw him die in them and is… really earnestly charitable and kind about it all. The people of London are surprisingly casual about zombies wandering around. She radiates kindness and earnestness and is doublessly going to be a regular character

Meanwhile elsewhere in London we have a Deacon of Westminster has been brutally murdered and the police Inspector wants to get his best man on the case: Sergeant Nightingale (who has a new sidekick, Bircher, who doesn’t impress much). The Inspector also has a super sarcastic snark about paperwork showing police work never changes.

The problem for the police is that the Dean of Westminster (who I hereby deem EVVVVVIIILL) has decided murder is a church matter and is using all his considerable influence to keep the police out. I’m not sure of his motive yet, I’m going with evil

The case Nightengale can pursue would be the escaped convict from Bethlem - Merlot. And there’s pressure to solve it because other-person-I’m-deeming-evil Mr. Dibble, a man of ridiculously excessive wealth is putting huge pressure on Sir Peel, the Home Secretary, to have him solve it. In exchange he will back Sir Peel’s cemeteries act and he has that kind of pull.

No we don’t know why this rich guy cares about Merlot. Let’s go with evil

Investigating does reveal that Merlot was dropped in the asylum by Lord Hervey - but anonymously (since Merlot is presumed dead by hanging) and Lord Hervey himself is now presumed dead as well after a fire. Merlot was in Bethlem for 3 years and left a whole lot of incoherent rambling notes during his stay.

But Nightengale does have two leads: 1. The doctor appears to be hiding something and 2. that visit from Rev Ambrose

Except Rev Ambrose has just been brutally murdered - looks like this murdering of clergy is turning into a serial killer thing.

And we've got all kinds of plot hooks to come