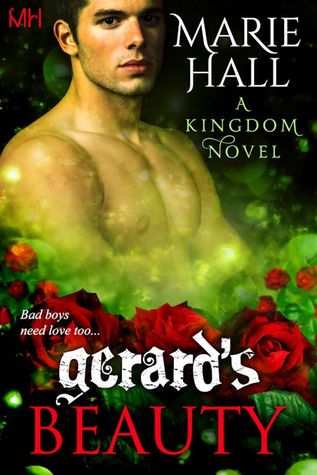 We've all seen Beauty and the Beast.  What if, Gaston had been maligned and was actually the good guy? In Gerard's Beauty, this is exactly what Hall proposes.  Gerard, had fallen in love with Belle, doting on her, and doing her bidding at all times.  Belle however had other ideas and instead of being with the man that was supposedly good for her, she fell for the Beast because he was rich, leaving Gerard alone and in misery.  Gerard was heartbroken and believed his life could not get any worse but then a princess threw herself at him and now the entire kingdom wants to exact revenge for his manwhorish ways. Luckily for Gerard, his fairy godmother has a plan.  If Gerard can somehow make his true love, fall in love with him in thirty days, he can win his freedom and spare his life.

I don't know why I keep punishing myself by reading these re-writes of fairy tales.  I've only read one series that's been good, yet I keep taking another bite out of the apple in the hope that this feat can be repeated.  Gerard's Beauty is an epic failure. I suppose some of this is my fault because what good has ever come from a cover with man titteh?  I know that paranormal romance is all about a couple falling in love but it usually comes with some version of a plot - something to make you want to root for the HEA but I simply couldn't get through this fast enough.

Gerard, the protagonist is an asshole. There's no other way to put it. He's actually not far from being an incel and that's creepy as fuck. Gerard spends a lot of time up in his feelings because Beauty chose another man and made him feel stupid because she is smarter than him.   The man is actually illiterate but because he felt that it was unmanly to read, he never took the time to learn. So, Beauty's biggest crime is simply deciding that she wanted to be with someone else and didn't return the love he felt for her.   Gerard is an empty headed ass who thinks that he's entitled to women's bodies.  Of course, this belief is bolstered by the fact that every woman wants to throw herself at him because of his super hot bod and breathe that smells like brandy (ewww). Even the head fairy godmother is angry at him because of his rejection of her.

Gerard is sent to earth to claim the heart of Betty, who is just getting over a broken heart thanks to getting involved with a playa.  Betty supposedly is taking a break from men in order to regroup but when Gerard shows up outside of the library where she works, looking like a homeless man, Betty suddenly cannot resist him because he's so damn hot.  When Betty realises that Gerard doesn't have a place to sleep and the weather is inclement, she decides to take him home. Look, I get looking out for someone who has less and is potentially vulnerable but who takes them home because they're horny?

Gerard is sent to earth by his fairy godmother to buy time while she intervenes with the citizens of fairy world (for lack of a better term) because they are upset that he may have despoiled a princess. Gerard of course claims his innocence and argues that the "coquine" threw herself at him and he rejected her, leaving her purity in tact. Yes, coquine is french for slut. Slut, skank and whore are words that Hall uses repeatedly in this short book to refer to women. In 188 pages, Hall manages to slut shame female characters ten times.

Despite all of his disgusting qualities, Gerard does have one line he refuses to cross and that is taking advantage of a drunk woman.  That however doesn't mean that he feels that he needs consent from a woman who is sober.

"He knew women, knew when they were sexually aroused and though her lips said no, her body told the true story."

Betty does try to hold Gerard accountable however every time he crosses the line and is duly in need of a slap, she becomes aroused and so it's all bets are off.  Gerard only stops assaulting Betty and tries to get to know her when he is punished by having his ability to become erect taken away for a month. Gerard is so firm in his belief that women are sexual objects, the only way to get him to take the time to actually learn a woman's name, let alone the first thing about her is to take away his ability to have an erection.  Please tell me why any of this shit is supposed to be romantic? If that were not enough, then we get to read about Gerard's suffering because he couldn't blow a nut for a month and oh how he suffered.

By the time I came to the end of Gerard's Beauty, I was absolutely grateful that the torture had come to an end. Even the sex scenes, which are supposed to be the point of this drivel were subpar and written by someone who has no imagination and clearly a shitty sex life.  Gerard's Beauty is terrible romance and even shittier porn.  There's not a single redeeming thing about this book.  I am so thankful that I have a digital copy and that no trees died in the creation of this monstrosity. Gerard's Beauty is supposed to be a retelling of Beauty and the Beast but it only got as far as shaming Beauty for having a mind of her own. It didn't add anything to the story and only made me believe that Belle was smart enough to escape misogynist douche, who never saw past the shape and size of her breasts.  Trust me when I saw that a mind is a terrible thing to waste and so you don't want to subject it to something that is guaranteed to at least damage a few brain cells. There are no circumstances under which I would recommend this book to anyone but enemy and even then, they would have had to have done something absolutely heinous to me. Gerard's Beauty is so bad that the forced reading of it, could probably be considered a form of torture. Consider yourself warned.