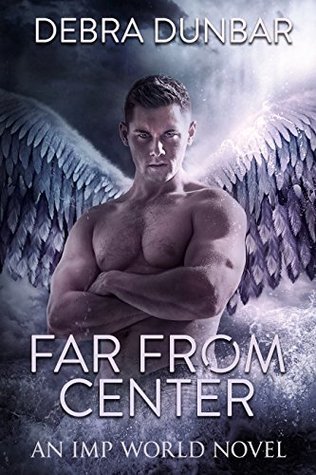 The Arch Angel Gabriel cares so much about his vibration level and staying pure that he eschews all physical pleasures but it does make him particularly dedicated to his work.  After searching for a fellow angel for eons, Gabriel finally has a bead upon one of the angels responsible for the rebellion in Aaru. As an Arch Angel, Gabriel has little to fear and so he's certain that he will get his target, until a confrontation with a human that turns hims temporarily human.  Without access to his grace, Gabriel is forced to continue the mission in order to stop a dangerous artifact from ending up in the wrong hands. This may well mean his life and if that were not bad enough, Gabriel, having been an immortal being since creation, has no real idea how to navigate the human world or how to keep his body healthy.

I normally wouldn't start on the 20th book in a series but I made a mistake and thought that Far From Center was part of the Imp series by the same author.  Fortunately, having read most of the Imp books, I am quite familiar with the characters in question and was able to follow the story quite well. If you find yourself in the same situation, feel free to jump in because it will give you a more intense look at characters that are largely side characters in the man Imp series.

I'm a little caught as to exactly what genre to put Far From Center in. The originating series is most certainly straight up urban fantasy whereas; Far From Center absolutely brings in elements of paranormal romance, even if the romance doesn't completely drive the plot.  Without the relationship between Nyalla and Gabriel, the book certainly would not have had the same intensity and Dunbar did end the book with an expected HEA. I suppose the best way to describe this book is that it's a bit of both.

One of the things that attracts me to Dubar's work is that she's not afraid of the ridiculous and is quite often laugh out loud funny. I'm happy to report that From From Center is no exception. Gabriel first runs into trouble when he's discovered sorting and folding Nyalla's underwear because his OCD simply won't allow him to search for the item he needs without cleaning up the mess she's left behind. Even his so-called dirty talk is all about how messy Nyalla is because never having had intercourse, he has no idea what dirty talk is supposed to be about. I even found myself laughing when he began reading a bodice ripper and got completely caught up about whether pirate would make it to shore before ravishing the protagonist who chest kept heaving. All of these situations work because as a human, Gabriel is a fish out of water.

Gabriel is the quintessential middle child trapped between his older sibling, who he wants to emulate and his younger siblings who are far more carefree than he could even hope to be. Gabriel has spent his long immortal life striving for perfection in an attempt to become closer to the divine, even as he takes on the burdens of everything that's wrong with the world. Gabriel in short, is far harder on himself than everyone else and it has resulted in an extremely lonely existence. Gabriel is actually a virgin, having not mated with an angel because he never felt worthy or a human because he believed such a dalliance would lead to disaster for a human mate. The scene in which Nyalla and Gabriel decide to consummate their relationship is so unbelievably touching and beautiful.

Nyalla is the only female character and Gabriel's love interest in this story.  Even though she's had a horrible life, having spent the first eighteen years of her life in Hell enslaved by the elves, Nyalla is determined to enjoy the simple pleasures of everyday life. What I like most about Nyalla is that she's not looking for Gabriel to sweep in and save her and demands that he pay attention to the situation. Nyalla is incredibly competent given the fact that she's a human in a supernatural world and it's Nyalla, who attempts to save Gabriel when he is captured which is a nice change of pace.  I would however have preferred if Nyalla weren't the only human woman in this story who rose about the point of a brief mention. So I guess in terms of the Bechdel Test, Far From Center is a failure.

Far From Center is absolutely the perfect example of magically diverse but humanly erased.  There are various angels and demons in this book and even elves are mentioned but when it comes to humans, they are all white.  What sense does it make to set a story in Aruba of all places and have not a single reference to people of colour? Yes, I know that rich white people like to vacation there but the population itself is made up of Amerindians and a decent percentage of Afro-Arubans. If that were not enough, even if the demons don't supposedly care who they sleep with, their pairings were all decidedly heterosexual. There are no trans people whatsoever in the story.

Only Dunbar could take an anecdote about a demon jerking off after fingering a 90 year old waitress funny but repulsive at the same time.  The comedy keeps you on your toes even as the touching relationship between Nyalla and Gabriel builds. I love how Gabriel who has always been painted as the angel with a stick up his butt was humanised and finally made approachable. He will probably still fight the Iblis tooth and nail but at least now we have some greater understanding of why our favourite Imp drives him to such distraction.  I loved this book even if I was initially confused by the change in focus from Sam to Gabriel. It was a fun light read with plenty of tension to drive the narrative beyond Nyalla and Gabriel falling in love.  If you're looking to explore Dunbar's world and have already read the Imp series, this really isn't a bad place to start.