Immortally Yours (Argeneau #26) by Lynsay Sands 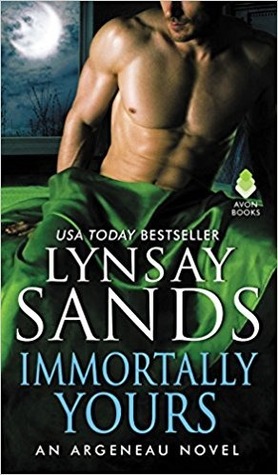 Beth has had a thing for Scotty, the Scottish laird for as long as she's been an immortal but unfortunately, Scotty has proven time and time again that he's far from Beth's number one fan. With most of the North American hunters in Venezuela, Scotty shows up in Toronto to lend a hand to the North American hunters. Beth's libido might be happy to see Scotty again but she's not exactly pleased to be working with a man who thinks so little of her.  Scotty and Beth become intertwined when they are forced to travel to B.C. to deal with the daughter of the head of the Russian Council, exposing Beth to a second attempt on her life. Knowing someone is trying to kill you is a tough thing to deal with but Beth is actually more uncertain about the fact that Scotty seems to have changed his mind about how he feels about her.

This is the twenty-sixth novel in the series and so by now, it's pretty formulaic. Unlike the previous books, Sands doesn't try to add anything new to the world.  Immortally Yours, is entirely predictable with no real twists and turns. Sure, Sands tried to turn the identity of the person trying to kill Beth into a mystery but a two year old could have figured out who the antagonist is from the very beginning. Because the mystery is so uninteresting, the only real thing to draw the reader is the relationship between Beth and Scotty.

As a female protagonist, I like Beth very much which is not something I often have to say about Sands's female characters. Beth is very strong, independent, smart and most importantly, she's a survivor, who has no interest in being saved or having her past erased. Beth has completely accepted who she is and the path that led to her current identity. Beth was sold into prostitution by her father, had her virginity auctioned off to the highest bidder and was beaten regularly until an immortal intervened in her life. For most of Beth's life she worked as a prostitute, determined to be self reliant until the end.  I absolutely love that she pushed back against the shame society and even Scotty tried to make her feel.

This review wouldn't be complete if I didn't take the time to talk about Sands's treatment of sex workers in this novel. Sands floated back and forth between the socially constructed hooker with a heart of goal, and the money grasping evil whore.  It would not be understating it to say that Sands's treatment of sex workers is absolutely toxic and misogynistic. Scotty spends much of the book disparaging Beth because of her past as a sex worker.

Now that he was being forced to confront his feelings on the subject, he admitted that before meeting Beth he'd always thought prostitution to be the lowest of trades. He'd been raised to believe prostitutes were shameless, deceitful whores who cared only about coin... and he couldn't bear knowing that Beth had once been one. (pg. 200)

Odilia, in part based her hatred of Beth on the fact that Beth was once a sex worker.

"You are a prostitute! A whore! You probably spread your legs for half of London back in the day, and half of Toronto since you got here. He will believe it, and he will see how cheap a slag you are and how unworthy you are of him and the love he proclaimed for you. (pg339)

Even characters like Magnus are more than happy to make excuses for Scotty's slut shaming by suggesting, "We come from an earlier era, one that forged our morals and opinions. We were taught prostitution was an abomination to our Lord God. Of course you would struggle with it." Even when Scotty does do a turn around, it's only because Beth has redeemed herself in his eyes with her willingness to care and sacrifice herself for others. It was further cemented by him realising that Beth chose to continue her profession because she didn't see that she had any other options. By telling her story, Scotty came to realise that not all women prostitute themselves because "it was easy coin, or because she enjoyed the power of controlling men with her body."

To make matters worse, we learn that Scotty's disdain for sex workers is because of his hatred of his cruel mother.

"And then there was me mother. She was a whore. No' professionally. At least, she did no' have a pimp or live in a brothel. However, she traded sexual favors for -" he shrugged helplessly, his chest moving under her -"basically for whatever she wanted. She slept with the king to gain favor for her father, and boost his - and by extension her- position at court. She slept with high ranking officials, lairds ... basically anyone who could do something for her that she wanted. And then she slept with me father."

Through Scotty's description of his mother, we learn that he saw her as a conniving social climber. This description is heartlessly cruel when put into social context.  Men held all the power during that time and the only influence women often managed to gain was through using sex expertly or manipulating social associations to their best advantage. Scotty didn't bother to interrogate the world which gave women few choices but instead shamed women for utilizing the only path to power they had.


The slut shaming of Scotty's mother was bad enough but then Sands added to the horror when Scotty detailed his disgust about the fact that his mother would take concoctions to abort fetuses and even abandoned a few babies without knowing whether or not they lived or died. To ensure Scotty's birth, his father locked his mother in a tower to ensure that she could not abort her pregnancy and then forced her to marry him by threatening to ruin her reputation. I can understand Scotty being happy to be alive but his absolute refusal to judge his father for forcing his birth by kidnapping and then blackmailing his mother is beyond problematic. Of course Scotty's mother was cruel to him, she never wanted him in the first place and her actions to evade motherhood prove that parenting is not something that she ever wanted to do. To then complain that she wasn't the kind of mother Scotty wanted shows an absolute inability to see beyond his own needs, wants and desires. In short, Scotty is a sexist. There is nothing admirable to Scotty's perception of women.  Sure, Scotty ends up realising that he's treated Beth abominably and even concedes that he might not be worthy of her but that does nothing to change his patriarchal beliefs of what  a supposed good woman looks like.

Sands is known for the humour that she adds to her stories but this time, it really falls flat because in many instances. it is based on using the feminine as a pejorative. Donny choosing to order a hazelnut latte with skim milk and sweetener is enough for Beth to say, "he's a girl in disguise." Donny's love of donuts, similarly results in the same negativity from Beth who mutters with disgust, "such a girl".  Why the hell is food choice being associated with gender and why the hell is it negative if it's feminine? Sands has a long history of using the feminine as a pejorative to attack her male characters. It's never been funny.

Unlike many of Sands books, this time she bothers to include two LGBT characters. Russell and Francis make an appearance at the beginning of the book.  They are involved so briefly in the story that they don't even rise to the level of side characters.  It feels as though they are around long enough to remind the world that gay immortals exist and then disappear. I understand that the purpose of this genre is to uplift heterosexual pairings but Sands absolute refusal to have LGBT characters play anything beyond the most minor characters is extremely problematic.

I don't actually expect much when I pick up a book in the Ageneau series - a little humour, maybe a mystery that isn't that easily solved and some progression to the world building. What I got this time is a misogynist tomb masquerading as a paranormal romance. Immortally Yours, is so full of slut shaming that it is impossible to root for Beth and Scotty to have a relationship. Scotty had proven in well over the hundred plus years that he had known Beth that he wasn't worthy of her and the fact that she just forgives him for shaming her at every term is beyond disappointing. Some couples don't deserve a HEA.