Hullen Johnny continues to cause shenanigans. He and D’avin have abandoned Delle Saya and are going on a road trip with him being the most annoying little brother there has ever been. The plan is to find some green goo so Johnny can use his newly minted Hullen-ness to contact Dutch and save them all.

Of course as they go, D’avin becomes increasingly disturbed by Johnny’s Hullen skills (especially since he accuses Johnny of liking his new super powers just a bit too much) and powerful Hullen mood swings. Even those may not be what it seems - because Johnny is definitely losing himself to his Hullenness, the occasional Dutch hallucination is all that’s left of Vintage Johnny and he definitely has his own nefarious end game.

Johnny does ask D’avin to kill him if he goes full Hullen but that may be manipulation as well - especially when they get physical several times and Johnny definitely has the edge over his brother.

Plans are somewhat scuppered by Warden Juno managing to send some troops after them, requiring Johnny to use Hullen skills to rig a bomb to kill them - using his Hullen healing skills to take the blast and protect D’avin… and D’avin takes the opportunity to chain Johnny up. Johnny tries to push all of D’avin’s emotional vulnerable spots (making the point on how emotion is a weakness) but D’avin won’t bend, especially since he can see Johnny talking to his hallucinations

It isn’t enough though - when Johnny finds the green pool of Hullen goo he turns on D’avin and even though D’avin is pointing a gun at his brother Johnny wins, breaks his chains and shoots D’avin.

Who is thankfully wearing body armour and they fight - him trying to reach Vintage Johnny, resorting to using his anti-goo powers and still losing and getting strangled. Until Dutch rises from the goo pool and shoots Johnny

The pool crystalises - which is new - and Dutch collapses.

Back at the prison we have Supreme Queen Before Whom Everyone Should Worship Delle Sayah facing off against Juno the warden. Bea advises her not to mess with him to which Delle Sayah says:

No honey, I never want to mess with men like this, but if you don’t they’ll never leave you alone.

“Keeping my head down isn’t my thing, it messes with the crown.”

So she waves her authority as being head of the Nine but Warden Juno isn’t into that, doesn’t care and intends to sell her baby (after turning off the cameras - apparently selling organs for the company is ok. Selling babies for his own profit is not). He quips about her delicate condition to which Delle Sayah slams several people into hard surfaces and takes several drugged darts before finally going down

She’s chained down and Juno intends to induce her pregnancy. This leaves Delle Sayah to recruit Bea to her side, making it clear that fighting to escape and dying is still better than staying there and being used to harvest organs.

She also advises that: 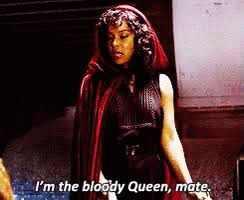 She offers Juno a bribe of how to grow organs super fast - showing off her own impressive Hullen healing. Very impressive - and he releases her for this exciting new business opportunity. To which Delle Sayah promptly feeds him to his company for stealing from them so he can be used as an organ farm himself (he forgot a camera). He tries to threaten revenge and we get

She also tells Bea to send her video of the first organ he has extracted. And to make sure it’s the liver.

From the awesomeness of Delle Sayah we go to Zeph who is also pretty awesome. Having figured out she needs to track down Lucy to track down D’Avin and Johnny she sets about trying to find the Hullen ships which were tracking Lucy using one of their many frozen Hullen and zapping his brain

It works - but interestingly while being zapped he points the gun at his own head and fires (the safety is on) saying “She’s coming she’s coming” which is ominous.

But Zeph does have a plan - aided by Pip because sex helps Zeph think. There’s an awkward romance there between Pip and Zeph as (in a complete switch of sexual stereotypes) Pip clearly wants a greater relationship while Zeph just sees it as casual sex which helps her think with minimal cuddling. Pip agrees that that’s totally all he wants even though he clearly wants more. The dynamic will be interesting to follow but in part based on how visibly uncomfortable Pip becomes and whether Zeph ignores/confronts that and whether Pip continues on lying about what he wants. There’s a lot to unpack here and it’ll be interesting to see how they do this

She also pushes Turin to deputise Pree and Pip so they can play with laws with Killjoy authority. Turin tries to get them to recite the oath before giving up when it’s clear how little either of them care

They do find Lucy but she’s been reset to hide everything and that leaves the gang to try and guess the codes. Which mainly involves play acting as John and Dutch which includes hilarious lines like “be the leather pants” which is mainly an excuse for Pree to let his sass go (which… doesn’t work because he isn’t bouncing off anyone. He’s dropping in one liners without any real purpose - he’s just sassing for the sake and it feels a little forced). Eventually they remember the appropriate song to unlock it. Which means they can sail in to rescue Delle Sayah

Who doesn’t need rescuing as she points out

And Delle Sayah stand above them all. I don’t even care if the Hullen win if Delle Sayah is the one who ends up in control.