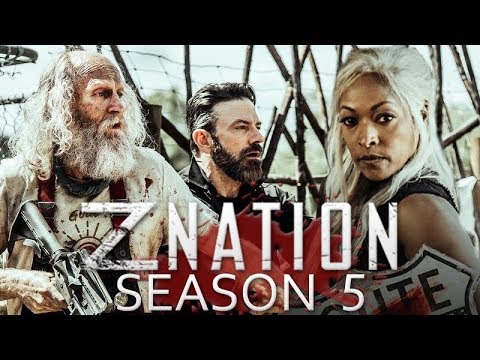 Warren’s drone crashes and she staggers out, a little injured in that televisions generic-wound-in-side-that-lets-you-walk-a-few-days-before-fainting which is just so common. She staggers on, her hair turning from blonde to black (is this supposed to show a large passing of time, her finding a wig, the hair dye wearing off? If it’s time this makes it a damn weird injury that it neither heals nor worsens in the time it takes to grow a foot or so of hair) until she finally collapses

She’s found by Cooper on his farm full of organic greens and he spends a few weeks nursing her back to health. He’s been all alone since the Black Rain when the world seems deserted now. Slowly over the weeks Warren goes from being ultra suspicious, barricading her room at night, distractedly eating food to getting closer and closer. She cooks for him, starts farming with him, dancing with him - and kissing and having sex. By the way they talk about fate I think it’s way more than just attraction.

They also fight together killing zombies to get a tractor to grow enough food. And she finds his family in the barn where they’ve been as zombies since the Black rain… he couldn’t bring himself to Mercy them. She offers to help him but her mercys them himself. There’s definitely a whole relationship growing here - I wonder how long he will last

Or what will happen when Murphy finds her. He leaves Doc and the others as they approach Newmerica because he absolutely insists he has to find Warren, that they have a bond and she absolutely would look for him. I think he’s right, over the seasons he has definitely developed a bond between him and Warren. He tracks Warren by interviewing zombies - by eating their brains and being able to read their memories.

Doc and the rest (10k,  Sgt Lilly) - after a truly cruel fake out that made us think Doc was dead and a zombie (bad Z Nation!) are leading a small band of survivors to where Newmerica is. But things aren’t going so well - everyone is kind of sick and worse for wear after the black rain. And there’s an unfortunate moment when three of them try to eat each other’s brain which is worrisome - they are still not zombies and even to talk though

One of the zombies that did attack them seemed to say “no” before it was shot… And with Warren and Cooper a zombie covered when they pointed a gun at it. It still kept trying to attack - but it cowered and showed fear.

This blurring of lines continues as they find Newmerica - and the three brain eaters all lose it and become violent, needing to be restrained until George arrives to give them biscuits. She seems to be a leader of Newmerica and explains that there’s a new kind of zombie - Talkers. They are dead, including the three with Doc’s group, but they still have souls, they can still talk and communicate so long as they get their zombie buscuits

And no, they don’t know what’s in them but assume some kind of brain extract. Without them they become zombies - but otherwise can communicate as normal. Ish. Lt. Dante who seems to be her second is a zombie talker but seems a little slow and Braaaainnnssyy around the edges.

She also explains Newmerica… it’s not a place. It’s project in process. It’s a series of outposts working together and they’re about to hold elections to draft and sign a new constitution for a new nation. And, yes, the Talking Dead can also vote and be part of the new nation. She’s willing to take them to an outpost so they can sign up

This episode brings in a really difficult and fraught concept. Zombies are the disposable monsters you kill randomly but occasionally angst over. Trying to keep people around to heal them - like Cooper did - is impossible and killing them is termed as “mercy”. Because there is no hope for them. And now we have zombies who talk and think and, in many ways, are indistinguishable for living humans. Z Nation has always played a little with this line before with Murphy and his daughter straddling the line and being able to communicate with zombies. But this makes it far broader and raises far more questions and puts a whole lot more grey about killing zombies, looking to cure zombies and seeing zombies as disposable. They’ve opened the possible door for levels and nuance as well - Lt. Dante is significantly “deader” than the the ones with Doc. it’s possible this age - but if there is a spectrum of zombieness it also makes it even harder to say where you draw the line between a “Talker” and a zombie they kill?

Things could get delightfully complicated here.