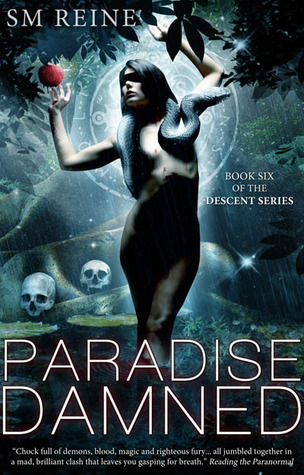 Elise is trapped within the Garden of Eden - and it is time for the godslayer to finally comfront God himself. Or at least try to survive his presence...

James has run to the rescue - but he is trapped and lost in endless limbo. While on Earth forces gather, the Union, hunters and even demon/angel hybrids as a cataclysmic event is predicted
This book is an odd book. There is plot but for the most part it doesn’t progress and go anywhere. We follow Elise almost exclusively now she is trapped in The Garden with her long nemesis - Adam, God. The god, the god that she, the godslayer, was always intended to face

But while in that garden she experiences a great deal - but, through sheer powerlessness doesn’t do a great deal or move the plot forward. And I think that works and is very necessary to convey just how very powerless and lost Elise is at this moment - how her just surviving and continuing to go forwards in a realm that is inimical to her very being in the face of a being of literally omnipotent power. Being frustrated, being stuck, seeing no way out but fighting on anyway is the core of this book and Elise herself

And while that happens we have the revelations - oh the revelations and truly fascinating world building and take on the ancient Adam and Eve mythology. The nature of Adam/God, the very different nature of Eve (which definitely flips the power scale before Adam ruined everything) the nature of Lillith, the birth of angels, of demons of humanity, why the whole idea of sacrificing women to the clearly dangerous and broken god keeps working, Metaraon and his motives towards all the events in the series so far, including the shape of this coven - so much is here.

On top of that we have nice moments from Nathaniel (James’s son), Elise’s mother Arianne and James himself all adding new shades to their characters both now and going forwards as well as more flashbacks of Elise’s past which helps understand her a bit more. I especially appreciate, after my previous complaints, that Elise and James have a major confrontation over the information he has been hiding from her - and it’s neither dismissed nor swept up. In fact it’s a nice contrast how she kind of rebuilds a lot of bridges with Anthony after their deeply broken relationship after they were both emotionally reeling - but such a neat resolve is denied James

The book ends with epic. And I think it needed to - after so longer with Elise captured and helpless we needed reminding of her awesome strength, we needed reminding that just because she was so helpless in the face of an impossible force doesn’t make her weak. It worked - and I think it worked even more that we had a sort of mini epilogue to basically say that it isn’t over That despite the whole massive, world changing hugeness that just happened, life still goes on and it goes on in quiet, sad and often mundane ways

One odd side effect of all the epic hugeness this is that Lucas, Malcolm and Anthony, making their way to Oymyakon, seeing the Union getting up to various shenanigans is a very fun romp (and I will always kind of love Malcolm, the quintessential rogue) but also jarringly out of place and bizarrely mundane next to all the epic world building and revelations out there - but at the same time the only part of the story that is actually moving forwards

I feel compelled to add some extra explanation how I’m reading these books and series which may not actually be considered part of the review, but explain some of my approach

As I read this series I have an increasing sense of disconnect. It may be because it’s been such a long time since I read the first books in the series but I’ve read far longer series and not felt the same sense of shattering. I just can’t figure how we got here. How did the characters in Death’s Hand end up here? I think it could be more my confusion with the Descent Verse in general - this is a shared world with 12 separate series in it - I have read books from 6 of them and I can’t make them fit together! All of these books all belong in the same world setting but by head is throbbing trying to make them fit together. One of the reasons I’ve made a new effort to catch up on this series is that after Drawing Dead (a book I loved) I was so utterly lost and confused that I decided it was time to tackle this whole world in chronological order. Ironically most of the books and series have been excellent and if I wasn’t told they all exist in the same world I’d probably just run with it and be happy - but knowing they’re in the same world just keeps biting at me.

Finishing Paradise Damned marks the second of those 12 series I have no finished and I’m left feeling… accomplished. Like I am taking concrete steps in a process which also makes me question whether my desire to reach this overall goal and ur-understanding could lead me to treating the books as research “aha, this is where THAT fits in” rather than stories.

Despite all that I have to say this world has me. Yes I am committed to those 12 series out of a sort of obsessive need to make everything fit in my own head, but also because I know every step of the way will be fun and fascinating and deep and action packed and definitely worth travelling

(Oh and why does this cover say “book 6” when there have been 7 books?)