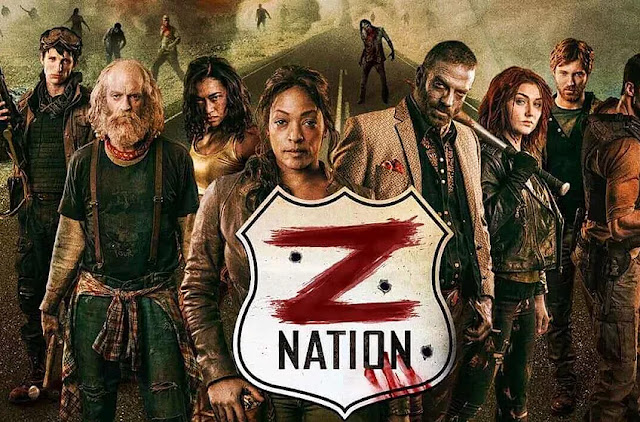 As the last season of Z Nation reached the finale it was revealed that there won’t be another –I saw the news on Nana’s twitter account. Honestly, part of me is shocked that such a gimmicky show lasted for five seasons – but I’m still going to look back on this surprising sharknado of a series…

It’s original, it’s new, it’s different. To bring such zaniness, so consistently to a long running zombie show was definitely surprising. It managed to maintain a level of comedy and weirdness that we rarely see. And yeah, sometimes it was annoying, sometimes it was silly, sometimes it really
doesn’t make sense. But still it’s different and I really appreciate that, Addie, Warren and Murphy (the relationship between Warren and Murphy has so especially when backed with a really strong core cast. Especially Warren who I both think made this show and is completely wasted on this show. But 10k, many levels, I really wish the show had continued just to see more of it)

I think Z Nation has always suffered from something of a tonal dissonance. It is zany and that does make it unique. And equally if it was zany every episode it would become way way way way more annoying and I couldn’t stand it… but this contrasts a lot from other zany shows like, say, The Librarians or even Warehouse 13. Because Z Nation will not only bring the plot occasionally as well, but it will go all out for epic, heart rending angst and deep emotion and deep complex relationships like the one between Warren and binge watch this show as you’d be going along and then Warren will TEAR OUT Murphy and… it’s confusing. I  can’t even imagine what it would be like to
YOUR HEART with utter grief.

And then the next episode we’ll have a giant ball of zombies taking out the liberty bell neither half realises the other half exists. No matter how serious Warehouse 13 or The Librarians got, they always remembered what show they were. It’s like two shows mashed together and

And I’m not saying the serious elements are bad because they’re really really not. Z Nation can bring the acting and pluck the heart strings… but it feels out of place.

Z Nation attracted our attention in the first season when we saw Obvious Designated Protagonist Straight White Male die. It may be the most stunned I’ve ever been watching a show - they killed the protagonist! Already!

And then Warren stepped up and made the show her’s and I didn’t have a second of regret. Warren was such an awesome character for so long, yes strong but still having scenes of grief and vulnerability, inspiring, positive while not being naive, caring and charismatic. Warren has always been excellent.

Of course Warren being excellent meant occasionally it was tempting to look past some of the more problematic portrayals in the series. The sexualised, servile treatment of Cassandra was appalling, their forrays among the Native Americans have been pretty cringeworthy and their jaunt to Mexico was fraught with stereotypes… but then it also has Vasquez and Escorpion, two definite complex, layered characters.

Sun Mei as an Asian stereotype pretty much ticks every trope box but she was a character despite that and the only word of criticism I could ever have for Kaia (and Nana) is there’s not enough of them. The show has always had a number of female characters alongside Warren and Addie, Red, Sun Mei, Kaia, George and that is always good to see in so many male dominated shows… but I do have to note that none of them are constants in her life like Murphy, Doc and 10k are.

LGBTQ wise we have virtually nothing for five seasons. Two recurring bit characters are revealed as possibly gay for pure homophobic comedy reasons and then never seen again. And Addie is bisexual - and if you just blinked and say “wait, she was?!” you may have missed it as this was referred two once in one episode and then never touched on again. Unlike both her male love interests. We’ve mentioned this trope so often - of course it’s not a problem that a bisexual character is in opposite sex relationships but it’s telling how often the only LGBTQ representation on a show will be That One Episode where a bisexual character briefly mentions their bisexuality for it never ever ever to raise again.

I’m putting this in a category by itself because I think it pretty much killed Z Nation. Ultimately, the last season was a reboot

And, as I’ve said repeatedly before, I’m not against reboots. I’m fine with reboots. I think reboots can be good and if you think a show is getting tired after 4 or 5 seasons, a reboot is a good idea. Otherwise things can get stale - *cough*The Walking Dead*cough*

But the reboot of Z Nation was so clumsy. Everyone went from struggling to survive on the edge of extinction with no real hope and suddenly we have whole societies and networks of outposts that have been surviving and thriving and no-one even knew?! Where did this come from? There was no transition at all

We went from survival to nation building over night with no transition. We went from scrabbling to live to a really convoluted prejudice metaphor with the Talkers (and again, if you’re going to make a “prejudiced is bad!” supernatural analogy please don’t make your oppressed people actually brain eating monsters). And this really damaged so much of the show - mainly because no-one actually had a place in it any more. In fact it feels like a whole new show centred on George was just dropped on Z Nation and then no-one knows what to do with, well, any of the original cast. Warren is awesome, she’s always super awesome, but she spends SO MUCH TIME as an emotional crutch for George. And why is the Cooper storyline there? Why is Doc here - comic relief in a season which has decided to ditch the comedy? We had a brief attempt at 10k having a plot line which hey, is nice for him to be more than a gun… but hey fork! Problem solved. And why are Red and Addie and Sun Mei even HERE? Red and Addie especially, it’s like they wanted to bring back old characters but had NO CLUE what to do with them? And Murphy? It’s almost ludicrous how much everyone is ignoring his super power at this point.

But it was also fundamentally changed thematically- the zaniness is largely absent. This season is, pretty much, barring the odd bit, serious. (And boring) It isn’t silly and while Z Nation often took that to extremes it was a part of what made this show unique. Instead it’s like the writers saw The Walking Dead were doing settlements so they’d do it now

And because of that the plot was just bad - rushed and broken and incoherent with dubious motives. Look, I’m not saying Z Nation has ever been a stellar example of tight coherent writing - but it was WHACKY. Plot holes are much easier to overlook when you have zombie cannabis and viagra zombies and other silly nonsense.