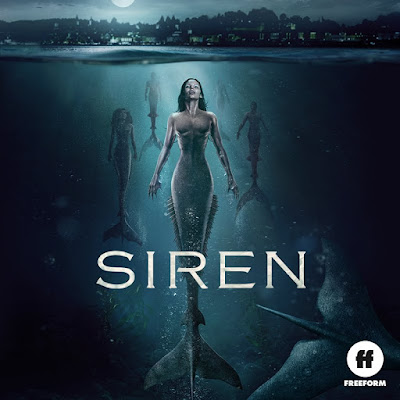 Ben is listening to recorded siren song. This is a bad bad bad idea.

And while he listens to it Ryn also dreams of Ben. This feels more and more like supernatural shenanigans and not a good sign. Ryn is especially confused because mermaids don’t dream and Maddie has to explain the concept to her - and add that it means she’s thinking about Ben and wants him. Which is kind of weird coming from Maddie - like she’s trying to resurrect her relationship with Ben but also trying to set up Ben and Rynn


But there’s a new merfolk drama - it seems while they all consider each other to be family et al, their views on family are much like mine: fine in concept but that absolutely doesn’t mean you need to spend more than 2 hours in their company. The merfolk are snarling at each other constantly, they need to be separated. Also in the sea, the merfolk are always hunting and fighting and doing something - inactivity is not something they’re used to. So time to get them all


Levi is coming with Ben and learning how to be a human man (which Maddie throws in more mixed signals by saying that Ben is the best rolemodel and kissing him). Levi promptly kisses a confused and shocked Ben - because like Rynn he still doesn’t understand how human interactions work. Ben does emphasise consent.


He wants to learn - so it’s down to Ben to teach him television, music, beer, sports, family and friends and not fighting. The last is especially important because though merfolk are a martriarchal society, the men are soldiers and protectors so Levi expects to fight and Ben has a nice speech about not fighting


There’s also the Xander issue and Ben tries to talk to him about how Levi is basically a soldier and can’t really be held responsible for Sean’s death. Unsurprisingly, Xander isn’t hearing this - because Xander has his own issues and plot for revenge


Xander has found the injured Katrina and is keeping her on his boat, trying to trade her freedom for Levi’s location (which is awkward because Katrina doesn’t actually know). It’s also dangerous because Katrina is a dangerous and crafty mermaid and quite willing to rip his face off - so he takes her out to sea. Unable to enter the water because of the death noise and can’t kill him because she can’t pilot a boat. So they strike a deal - he helps her get rid of the death noise and she will then help him get Levi


Which means both sides are kind of promising things they can’t keep.


Rynn and Maddie are living together with Donna’s daughter as Maddie moving out to get her own space to allow this. This does rather disturb Sarah who thinks her daughter is leaving because of her -but Maddie assures her it’s not and even has lunch with her as a peace offering. It’s a nice bonding moment but… awkward. Sarah clearly sees this as beautiful and meaningful and nostalgic and has even engraved one of Maddie’s necklaces with “love mom” on it which is nice. While Maddie is distracted, clearly viewed this as a sop to her mother, doesn’t have the same shiny memories or nostalgia and generally isn’t taking this as nearly as seriously. Awkward.


Maddie, Rynn and donna’s daughter all catch up with Ben and Levi in a bar (where Levi went contrary to Ben’s wishes because Ben is trying to teach him how to be his own person rather than just obeying commands). Levi’s doing well with beer pong and teaching Ben how mermaid mating works (which is fairly violent and involves men displaying gleaming neck lights to attract women) since Ben is clearly interested in Ryn. There is a bar fight and Levi manages to avoid fighting, listening to Ben. Ironically Ben is the one who knocks the guy out and then they dance (with Ryn confessing to Ben that she likes singing to him and this makes them think there’s a deeper connection to their longing than just siren song while I think that this actually means siren song is just more powerful than they realise).

Maddie who wants to check up with her mother - only to find out Sarah has been visited by Glen, her dealer, and is high when Maddie gets home. Maddie leaves tearful and angry, going to Ben and Ryn and the three bond and kiss. Is this the much vaunted bisexual representation that has long been teased on this show? Hmmm… maybe? I mean we just established that Ryn actually dreamed for the first time ever after Ben listened to a RECORDING of her song and she’s started daydreaming of him after that. We’ve also seen Maddie, despite the headphones, by definitely affected by Ryn’s siren song. The timing makes this whole thing rather less compelling as authentic - mind controlled potentially dubious consent driven by a mercreature that doesn’t even understand relationships. I can see this super complicated - but not as great un-asterixed representation. Ultimately, mind-controlling woo-woo casts a shadow here


The last drama is Helen - her squirrelly relative does come to visit her and perhaps my assumption of shadiness is unwarranted. Helen talks about how out of place she’s always felt and that’s apparently common ground for both the mermaid hybrids with addiction issues common in the family. As is their funky nasty icky skin. She presents him with a home cure which works which makes him super trust her because no-one has been able to cure his icky skin before


Which is when Helen introduces him to a mermaid to feel the connection -which he does on a mystical level.