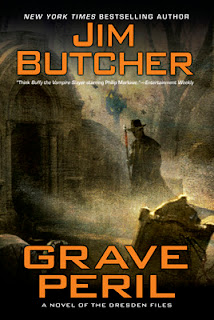 Harry Dresden returns in another Urban Fantasy Mystery. This time, ghosts are running amok, causing chaos and killing people and similar shenanigans. Harry must go out with his new side-kick, Michael a Knight of the Cross, and stop this sudden tidal wave of deadly ghost activity.

Following the exhausting and dangerous trail finds that someone is tormenting and manipulating these ghosts raising them and encouraging them to spread their havoc – and further, in doing so they are thinning the barrier between the real world and the Nevernever, allowing more and darker spirits to emerge. As if that weren't enough, there is something else out there, a Nightmare that is darker than any ghost they've faced that is hunting Harry and his friends specifically.

Harry must find how they are all connected and what lies behind the ghosts, the Nightmare, the thinning of the Nevernever all the while dodging his faerie godmother who hunts him and seeks to drag him away to be her slave – and even that must be done while negotiating the twisted and convoluted plots of the vampires as Bianca, an old enemy, rises within their ranks.

It's a desperate fight to keep body and soul together – and to protect those he cares about who are being targeted by forces even Harry can't comprehend.


In the past 2 reviews I said that Harry Dresden wonderfully walked that fine line of a good mystery novel – it managed to be complicated and puzzling without being convoluted. Well, sadly, I think in Grave Danger, we lost that balance. The machinations that drove the antagonists just came off to me as so incredibly weak. It struck me as an immensely complicated plan to try and kill Harry when really there would be 101 easier ways to manage it – a guy with a gun for example, poison... hells anything that wouldn't involve city wide chaos, immense personal risk and no small amount of cost and loss. I just really can't get behind people having an 18 step plan to kill someone when a bullet to the head would have done just as much and better. It doesn't even follow that the antagonists engaged in this long complex plan to hide their involvement or obtain plausible deniability – since the climax revolves around a big public show down.

Also not to my taste was the continuing lack of meta-plot. Here, again I'm going to make the same complaint. Yes, your mileage may vary, but there doesn't feel to be any great links between the books, especially since so many of the side characters were completely absent from this book. They're rarely compelling at the best of times, but neither Murphy nor Susan got much in the way of screen time. It jars even more that we have an entirely new side-character, Michael the Knight of the Cross, who just appeared from nowhere, with no previous mention and is now a good friend and colleague of Harry Dresden. I actually had to check to make sure I hadn't missed a book – but no, he's just been parachuted in. At least this book looks like it's setting up meta-plot.

I also have to say that many of the characterisations fell flat with me in this book. I don't see Bianca's motivations as being all that realistic – she's gone through a whole lot over a single incident. I also don't get her methods, as her plotting crosses the line to convoluted. I guess we have some series continuity in that her actions are a direct result of what Harry did in Storm Front, but really all this over that one incident? How does a vampire live that long being that reactive? It felt thin and left the book without a good foundation.

Michael gets on my last nerve – I suspect we're supposed to marvel at what a good and wonderful man he is, but in the end he's very preachy, self-righteous and repeatedly thrusts his faith at Harry even after it's been made abundantly clear that Harry isn't interested . And the fact that he is this virtual living saint with mega-holy power AND all tut-tut disapproving about swearing and pre-marital sex kind of gives the divine seal of approval to rather oppressive prudishness. Maybe it does make him a perfect Paladin – an inflexible, passionate, iron-hard confident holy warrior, but it doesn't make for a very sympathetic character. Which is fine, not every character has to be likeable, but I can't see how Harry wouldn't be more irritated than he is by Michael. They're presented as friends rather than mutually respectful colleagues.

I'm not sure how I feel about Susan, she's strong and independent, but is in severe danger of crossing the line into Spunky Agency. Murphy spent the entire book on her back sleeping or screaming, not a great book for one of the better characters. I want more Murphy!

Harry continues to be a patronising, paternalistic chauvinist and is joined by Michael so they can patronise in stereo – and he continues to get into trouble for being so, both by being slapped down by Susan for being patronising, and being dragged into trouble repeatedly for being unable to say “no” to a damsel in distress. Yes it makes him look repeatedly easily manipulated which could be something of a redemption – if it weren't for the fact this only happens because there ARE repeated distressed damsels in need of help and saving. And even Susan's smackdowns look weak now because of her Spunkiness, and Murphy's because she needs to be rescued and is out of her depth.

On world building – well it's book 3 now. I kind of want more. We're getting lots of hints – different courts of vampires, the Nevernever etc but I'd kind of like a little more. I'm also not fond of the delivery – Michael informing Harry and Harry replying “yeah I know.” Once, maybe, several times? Less so.

On erasure, it continues apace. I did miss that Susan Rodriguez is Hispanic, so there is one POC character though she's something of a Bonnie (hence I didn't even realise until I went back to her description in the first book and added on her surname). The cast continues to be as straight as straight can be.

This book was a definite step down for me. I did like it, but it frustrated me in places. It lost the careful balance previous books had struck, felt convoluted for the sake of it and missed the chance to develop any characterisations, develop any meta plot or really raise it's game from the previous 2 books. It was much weaker than Storm Front or Fool Moon. It does seem to be setting up more and better to come in the next books.

But I will say the ending made up for a lot. Oh yes, yes it did. The ending had the epic, it did.