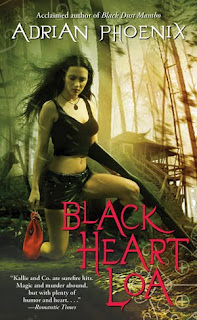 This is one of those awkward books where we find ourselves having differing opinions about the series – however we believe this is one of taste than impressions or fails – more a case of your mileage may vary. Still, one of us is quite happy to read this series, another would rather clean tile grout.

Keille Riviere, hoodoo and persistent user of a right hook to solve all problems is still facing the fall out of the events of Black Dust Mambo. Doctor Heron's misplaced crusade of revenge still casts long shadows – and her cousin, Jackson, has gone missing, perhaps Dr. Heron's latest victim. But, more pressingly, magic is failing. Every hoodooist, voodoo priest, magician and conjurer through Louisiana is finding their spells go awry. Some reflect back against their casters, some warp – some just become completely random. Worst of all, after Katrina, wards were set across the Louisiana coast to prevent another disaster. The wards have reversed – they're now attracting and increasing hurricanes – and another Katrina is on the way.

And if that wasn't enough to be getting on with, the loa Baron Samedi thinks Keille is responsible and is quite willing to kill her to solve the problem. Then throw in some werewolves and ongoing issues with her aunt's identity theft and you have a full set.

As I said, I liked the story. It has a wide world and it manages to maintain tension surprisingly well. It also managed to cover a lot of different things happening, often at once, without it ever getting lost, confused or any element feeling completely superfluous. It's a wide world,a deep, nuanced and fascinating story with plenty of twists to keep you amused and lots of curiosity to pull you further forwards – I kept reading because I wanted to know what happened, I wanted to see how various things worked, I wanted to see what the solution was, what the consequences where, how the world fit together.

Unfortunately, I did not keep reading because I was interested in the characters. I wasn't, I found them to be the biggest barrier to the story. Firstly, on a general point to all of them - they're very passive. The story is event driven not character driven. Stuff happens and the characters run to catch up – which is pretty much what happened in the first book as well. Again, it could be a matter of taste, but I'm not the biggest fan of characters who flail around randomly while stuff happens to them. This happens in most books, but there's usually a point where the characters rise up, seize control and make it happen. Not here, events happen and opportunities suddenly arise – none of it really due to the actions of the characters.

Keille is vaguely more interesting a character than she was – and less inclined to violently attack everyone around her at random, but I rather feel this is down to lack of opportunity in this book than an actual evolving character. Worse, she seems to have swapped a lot of her “look how strong I am, because I hit people” for an extra dose of angst – but, considering her circumstances, her angst isn't particularly unjustified or extreme. I think the problem I have with Keille is my difficulty in describing her – she has her angst, she has her anger, she has her lust – but does she haver a personality? I'm less sure. And this being the second book I kind of want more depth in the main character than that. Much the same can be said of Lane, though I think there's more to him than to Keille, he's still more a collection of vague issues than a person.

And speaking of lust. The sex dreams were lurid, common and unnecessary. And Dallas? I hope this storyline with Erzulie is going somewhere, because a character who exists just to drool over women is tiresome. The only thing more irritating to me than the sex dreams are the flashbacks. If you're writing a series, make it a series. We don't need the flashbacks. Does anyone read a series as a standalone novel?

In the last book I had to mention how truly awful Adrian Phoneix was with accents. Thankfully we don't have the same diversity of comic accents displayed in Black heart Loa - but apparently McKenna is Scottish, last book I thought she was Irish. I don't know if this is a consistency fail or a real comment on Adrian Phoenix's ability to write accents. I will say her cajun accents are better than most she's done (or maybe I'm just unfamiliar with them), but it's still a struggle to hear them and really I could do without it. A small snark, I know, but still.

Onto the social justice fails, I think we do see a relative shift to the better, but that's not saying a whole lot.

One of the biggest fails of Black Dust Mambo was the treatment of Basil Augustine (it says a lot about this portrayal that when I picked up this book I was chanting “please let Basil be gone”) - this was largely avoided in this book but that was largely because Basil didn't feature very prominently. I'm leery to give props for avoiding the fail by simply not featuring the failtastic character – especially since we had an out of the blue unnecessary gay florist reference – but it was better and easier to read.

I can actually remember Belladonna's name a lot more in this book, she has a more pronounced character and presence. She was much more commonly seen in the book and much more a person with actual actions rather than being a running commentary as she was in book 1. However her primary purpose is still to be sassy, sexy and incorrigible or to be the sassy word of wisdom for Keille or to be the sassy comic relief or to be the sassy side-kick. Yes, she's still very sassy and yes, that is still the majority of her character and purpose. She could use more characterisation – but so could every character, sadly. I'm not saying she's a fully developed and well rounded character, I'm saying that none of the characters in this book seem to be. She's just been upgraded to a shallow collection of loose traits rather than a walking stereotype. Yay?

POC in general featured more prominently as characters other than villains and Keille was fixed more clearly as being mixed race. Unfortunately, part of this larger emphasis (and don't get me wrong, the emphasis isn't LARGE, it's just larger) is edging into some blackety black black descriptions.

My last remaining reservation is that I have to say I'm a little discomforted by the main drama of the book. The main tension is to fix the magic before a category 5 hurricane devastates Louisiana. I don't know... it felt unpleasant and a trifle disrespectful to me to use the horror of that disaster as a backdrop and storytelling tool since it's very much built on an actual and horrific real world disaster. I don't think I'm entirely comfortable with this.

So, in summation? I like this story. I do – it's a deep world. It's a very tense and even exciting story. I'm continually curious as to where it's going and I managed to read it in 2 days without any pauses or moments when I felt like jumping out a window. But the characters let the story down, they feel shallow and empty and I'm really not very interested in them. I care what happens to the world and the story and I'm curious about the Loa – but not the characters themselves which is a pretty major barrier.