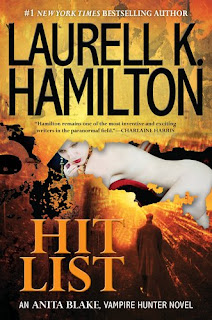 Yes, here I am getting fully up to date with Anita Blake so I can have another break before I have to face this again. So, Hit List, by Laurell K Hamilton

Anita finds herself called all around the US and finally to Seattle in her role as US Marshall of the preternatural branch. The Harlequin loyal to the Mother of All Darkness are hunting tigers – weretigers – and leaving a trail of butchered bodies in their wake. Anita, away from St. Louis and her powerful magical foundation there, as well as her mighty and numerous – oh-so-numerous – allies now must face Harlequin and Mother Darkness with a few body guards and her fellow US Marshalls, including Edward, Bernardo and Olaf.

In some ways I was relieved when the focus of this book became clear. It was another Obsidian Buttferly, another rescue from the endless sex, another holiday from the angst. Another attempt to return to what Anita Blake was – Necromancer, kick arse fighter, strong, powerful, driven by justice and finding the bad guy. Rather than what she had become – sex addicted, surrounded by angst and personal issues, constantly emotionally crashing, constantly fretting about her loves and marvelling at the new shiny power du jour.

Already we've removed many of the problems that normally make me cringe at Anita Blake. Without the 10 zillion extra characters, we're not going to get stuck on unnecessary tangents and side-plots. Without her harem we're not going to have page and page of sex. Without all their emotional baggage to juggle, we're not going to get the endless angst pages. This made me happy! Less so when Anita picked up a new tiger boyfriend to put some of the sex and angst back, but still, it was an improvement

Unfortunately, I'm never happy am I? Well, sometimes I am, but not in this book. The plot just kind of flailed around madly. There was no direction, no plan, no purpose from the main characters. This is something of a problem all the Anita Blake novels have – they're far more reactive than active – but it seemed much worse in this one. Whether it was the de-emphasis on humping and angst, the book's plot felt vaguely weak to me. There's a reason why my plot synopsis is pretty weak up there – there's just not a lot to report on.

Anita & the Marshalls don't really DO anything to try and solve these crimes. Not really, they just hang around passing the time until *gasp* they're attacked! Then they save themselves! Yay! Then it's back to twiddling their thumbs until the next attack. It's not just that they're reactive, but they're reactive to a level that is ridiculous for their role. It's like police who hang around the police station waiting for the criminals to try and rob them. Anita does very little to foil Harlquin except be attacked several times and survive.

The problem for me is that it meant the book had no focus. The real focus – the Harlequin and Mother Darkness – were so strongly de-emphasised that it seemed to be far more a book about Olaf lusting after Anita (someone kill the man already. No, really. He was an interesting side-plot, but there's zero reason why this increasingly unstable and vile man has been left alive by Anita, her harem, Edward or just about ANYONE for this long. And I don't care what extra shiny skill he has that is so important – all we've seen are easily replicated abilities. I don't want to see another book where they all watch him cuddle YET ANOTHER small, dark haired woman and say “oh how scary, Olaf is thinking of torturing and raping her to death” and everyone think how creepy that is without one of them just saying “screw this” and shooting him) or the dramas with the Red Tigers, or Ethan, her new multi-coloured tiger sex toy's issues, or dealing with Marshalls who loathed Anita or were too much a rookie to be in the position they were in. The Harlequin was almost a distraction to their niggling little side plots, rather than the main focus of the book. In the end, it felt like a day in the life of Anita which these annoying Harlequin folk kept interrupting, the pests. And the ending (which felt kinda rushed and tacked on -because, again, zero focus on Harlequin) was grossly anticlimactic, abrupt and over far too damn soon. It left me feeling dissatisfied and disappointed, without any sense of victory or epicness or even major conflict.

For more detail I have to resort to spoilers:

Anita wanders around being attacked – the book goes nowhere and then suddenly DING! Kidnap! Confrontation! DEATH! End. It was almost like Harlequin had to force an ending because Anita wasn't going to do it. I actually felt like LKH had no idea where she was going with this book and in the end just had to throw in the kidnapping because it was the only way to move the actual plot forward and end it.

And all these Harlequin had animals to call but no human servants? And a full half of them were corruptible? It's contrived it is.

I do not like how the Mother of all Darkness was killed, again. In fact I feel like LKH has just killed off what could have been a great resurrection of the series. We had an epic opponent, we had a terrifying existence, we had something that could consume books in focus and horror and power, an epic conflict beyond epic. One that calls for politics, uniting the vampires across the US, defeating a myriad of opponents and powers to face off her might, the might of the corrupted council and the dreaded Harlequin. It could have been epic. It could have been riveting. It could have pulled Anita out of the endless sea of angst and sex. It could have taken all the actions hinted at (and angsted over) in Bullet and taken them to the next level! Insteaaaad... Anita does her soul-sucky thing and kills her. Game over. Anita wins...

I'm sad to say I'm also a trifle irritated that Olaf again survived (oh gods KILL him already!) and is now a werelion. Not because I don't think it's an interesting twist but because I think we've now sown the seeds for yet another damn side-plot.

This wasn't as bad as many Anita Blake books. It missed many of the fails Anita Blake books are so constantly in love with – especially the enless, unnecessary, dull sex scene after scene after scene. But... despite that? Despite that it still wasn't a great book. The plot wasn't driven, it happened to the characters rather than being directed by it. It was disjointed, the characters just seemed to drift from event to event that continually happened to them rather than being driven by them and then it finished off with a very lacklustre ending.