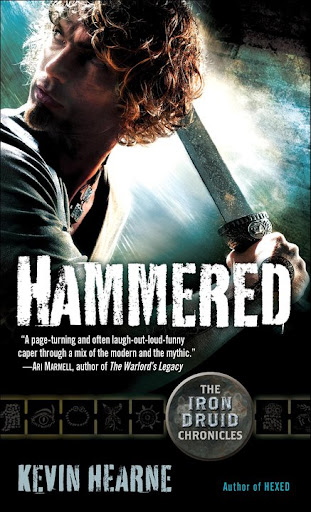 Hammered is the third book in The Iron Druid chronicles. You can find the review for book one here and book two here.  Paul, Tami and I have officially declared ourselves fan poodles of The Hearne (as my children have come to call him) with good reason.  The Iron Druid Chronicles are the kind of books that you stay up late to finish, and mourn sadly when you reach the last page.  I waited anxiously to get my hands on Hammered, and even stalked Kevin on twitter begging for some sort of spoiler. Yes, I am one of those fans.

Hammered once again centers on Hearne's protagonist Atticus, a 2000+ year old druid and his interactions with various creatures from mythology, Jesus, vampires and werewolves.  In Hexed Atticus met with the Virgin Mary and asked her to tell Jesus that they should get together for a beer and in Hounded that is exactly what they do.  Jesus appears wearing a tie dyed T-shirt in predominately reds, yellows, and greens, with a white peace sign screen-printed on the front of it.  He also wore a pair of relaxed fit blue jeans and classically black Chuck Taylors. Hearne even went as far as to suggest that "Jesus looked like the guy from the Old Spice bodywash commercials".  I dare you to tell me one single place that you can find Jesus described in this way?  What ensues is an irreverent exchange, with Jesus providing fish and chips to a crowded bar, explaining that "miracles are so much more fun when people are expecting them of you," while pounding back 60 year old whiskey. I laughed until my tears poured from my eyes.


As usual, Atticus' forever naked druid behind is in deep trouble.  To keep a promise he made to Lakasha, he has to go to Asgard to steal an apple.  If that were not enough trouble, he has to return to help Leif and Gunnar kill Thor, who seems universally to be thought of as an asshole of epic proportions.  Despite a warning from the Morrigan and Jesus, that this is a path destined to result in  tragedy, and most likely end of his life, being of the iron age, Atticus finds it impossible not to keep his word.  If I tell you any more than this, I risk ruining the story for you, and The Hearne is far too good to receive that kind of treatment.

As much as I am a fanpoodle, I would be completely remiss if I did not point out some issues I found with the book.  Unlike Hexed and Hounded, Hammered did not have a very strong female presence.  When a book has a male protagonist, it is far too easy to erase women or to make them sidekicks without any real power, and unfortunately this occurred in Hammered. At one point, we are even treated to a round of male bonding, and the characters make it clear that they are competing to see who is the most masculine.  Atticus ends up doing the dishes, because the other men deem it to be women's work, and therefore beneath them. I suppose the reader is supposed to take from that, that their behaviour is silly, but the fact that Atticus participates in this male bonding ritual throughout the novel, makes it hard to believe that this is some kind of judgement on hyper masculinzation.

Any doubt I had left was erased by the following passage:

Getting five men to simultaneously touch me and the root of a tree was vaguely akin to a game of homoerotic Twister, and I almost giggled - especially since their expressions practically broadcast that they were asking themselves. "Is this gay?" That would have lost me major testosterone points, though, so I firmly refocused my mind on the task and pulled us through to the Norse plane.

Keep in mind that there is not a single LGBT character in this entire series, and therefore it reads like to be masculine is to be aggressive and straight.  In our interview, Hearne said he doubted that he would have any gay male characters because he was worried that he would not get the representation right; however, erasure plus the suggestion that gay men are decidedly effeminate, is highly problematic. There is no single act that is specifically straight or gay.

In terms of characters of colour, there are Zhang Guo Lao from Asia and Jesus. Yes, I know you are used to seeing a blonde, blue eyed Jesus, but this is historically inaccurate, and in the book Jesus is glad to appear as a dark skinned man.  I found this impressive because the image of a White Jesus has historically been used to oppress POC.  Whiteness to this day cannot imagine praying to man that does not look like them, because Whiteness has been constructed as the height of human existence.  Even with the addition of Zhang Guo Lao and Jesus, the book still has far more White characters and this is because the book largely deals with the Norse Pantheon.  Often in urban fantasy, European based mythology this is used thereby excluding characters of colourm and so I sincerely hope that in the next installment of the Iron Druid Chronicles that we are introduced to more characters of colour.

Even with all of the issues in this series, I love this book.  It is laugh out loud funny and its treatment of religion is like nothing I have ever seen.  Once again, I am going to have recommend that you buy two copies - one for yourself and one for a friend.