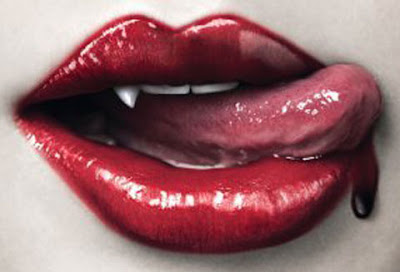 Last week, at the end of episode one, like many others, I did the mad dash to HBO to watch episode two, only to discover that it was and in fact still is, restricted to residents of the 50 states.  HBO has no problem accepting my subscriber fee that I pay every month, but somehow, I was not entitled, like every other fan, to get a sneak peek. Yeah, I am still bitter as hell over that one.  I had to spend the week carefully avoiding spoilers, because I didn't want last nights episode ruined for me.

Okay, rant off my chest, let's dig in shall we?  Last nights episode really made up for the crappy start last week.  I must admit that I was worried when I saw the terrible sci-fi effects in the first episode.  I am always the type that thinks when it comes to urban fantasy, more is better, and so I was really worried that we would be subjected to more cheap effects.  Here's the deal HBO, True Blood is making y'all a killing, and since you already got off way to cheap on the wolves, as far as I am concerned, you need to spend some money and do some actual special effects. (okay, so I lied, I had one more rant in me) Back on topic now.

There were several things going on this episode and rather than do a recap, I thought I would just talk about what I loved, what made no sense, and what I outright hated.  Pam once again stole the show for me, though she really did not have a huge part to play in the episode.  When she stopped Jessica from intervening in Hoyt's fight saying, "that technology has taken all of the fun out of being a vampire," because someone was recording made me laugh. My other favourite Pam line came when Sookie approached her to enlist her help in getting Eric to sell her back her home.  Pam looked dead pan at Sookie and said, "Did I miss something?  Are we girls now?  Did we join a book club and read some queer chick lit memoir and so now we're bonded together by estrogen, or sisterhood, or some other feminist drivel?"How can that possibly be beat?  Sookie's problem is that she is used to being able to bend people to her will and Pam is one of the few that consistently puts herself first, and no amount batting eyelashes will change that.  Only Pam could be that cool in the ugliest red dress under creation.

The other scene I liked also involved Sookie, except this time it included Jessica. After struggling to get together with Hoyt last season Jessica is quickly finding out domestic bliss is not everything she thought it might be.  Not only must Jessica adjust to her vampire nature, at 17 years old and coming from a Christian conservative family, Jessica has never had any freedom.  Hoyt may have seemed like a valid escape at first but now he is slowly becoming dead weight around her neck.  After he refuses to drink her blood to help him heal, she tells him that she is going to get him some Advil for the pain and instead heads straight to Fangtasia to hunt. After hearing Jessica drinking blood, Sookie being Sookie i.e. a woman that does not what is and is not her business decides to intervene.  After explaining to Sookie how much she hurts Bill, Jessica tells her, "stop acting like my step mom. I hated it before and I like it even less now. Just go away. This ain't got nothing to do with you. I can eat who I want."  And there you have it folks, twice in one night Sookie got told off and I loved it.  As much as love True Blood, Sookie is one of the least empathetic heroines I have come across in a long time.  Not even the talented Alan Ball, can undo the horror of Charlaine Harris.

I also loved Bill's flashback to a punk guy in London. It was nice to hear Moyer's natural accent,  rather than the terrible one he does for the show.  I love that they deepened the history by adding a new back story for Bill.  Also, can I say that Louis Pasteur as a vamp was just a touch over the top.  This whole time we have been lead to believe that it was Sophie-Ann, who was pulling the strings, when in actuality it is Nan Flannigan.  Learning that is almost enough for me to forgive Ball for turning Sophie-Ann into a simpering fool.  As those who have read the books know, the difference between the books and the show in terms of Sophie-Ann's character is extreme. I am very interested to see where the relationship between Bill and Nan goes.  Also, who else loved the eyeliner?

I am very curious about Sam's new love interest, Luna.  When it was revealed that she is part Mexican and part Navajo and that to achieve her ability that she had to kill someone it bothered me.  I don't know about Navajo lore so I am going to reserve judgement but if this is in fact something that Ball made up and then had her comforted by others, it is supremely fucked up.   As much as I love the addition of three new characters of colour this season,  after what Ball did with Tara last season, he really does not deserve the benefit of the doubt when it comes to race.  He has not reached Charlain Harris level yet, but he really is not that far behind.


Okay, Arlene flipping out because Sookie called her son an old soul, and protesting her love just simply got on my nerves. This whole storyline feels like Ball trying to keep her character relevant, and a part of the story.  And really, looking at the baby causes her to bust a blood vessel in her eye, which he is supposedly giggling over?  Enough, I don't care, and why are we wasting time on this when we could be looking at Eric naked?

The other storyline I could give a damn about is Sam and his brother Tommy. Nothing about that scene felt authentic. Does anyone really care if they become pals or are we all just waiting to see how Tommy complicates Sam's life again?

Andy as a desperate drug addict shaking people down, just kind of broke my heart. I have never really been a fan of him, but to have him descend so low was really a sad thing.  Watching that entire scene once again made me sad about the way that Ball has chosen to construct Hot Shot. In the books they had some problems with inbreeding, but they were a proud self sustaining group and that has all been taken away from them to play upon the worst class bases characteristics possible. When it comes to class Ball is somewhere out in the woods.

Last week I was thrilled when Tara kept doing her thing, and did not return the minute Sookie came home, but trust Ball to not allow that to continue for a few episodes. Right on cue, Tara drops a life in which she was clearly happy to play sidekick to the ever needy Sookie.  When Tara talks to her girlfriend, she once again lies and says she is home for her grandmother's funeral.  I do not like the dishonesty in this relationship.  I also detest that in the one scene in which Jesus and Lafayette are intimate, the camera quickly shifts away, but had no problem last week with Tara and her girlfriend. To me, it feels like Ball is playing up to the male gaze by giving the lesbians more air time.  Whenever Lafayette and Jesus are not filmed in dim lighting, or at weird angles, the viewer can assume that it will be a short scene.

I am very excited to see what the rest of the season holds.  What did you think of last night's True Blood?
Posted by Renee at 9:24 AM