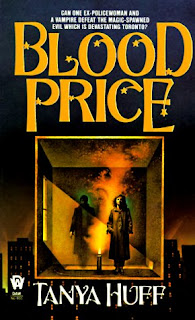 I only really started writing reviews relatively recently, certainly on books rather than on various issues that arise throughout a series. This has lead to a few regrets because there are a few books I would have liked to review in more depth when I read them and they were fresh in my mind – probably greatest of which are Tanya Huff's Victory Nelson series.

I have so far read 5 of the 6 books (the 6th is on my ever-growing reading list) and I wish I had written a review on each of them, because they are some of my favourite books. Not on par with Kevin Hearne or Kim Harrison (both of whom stand pretty far up the pinnacle) but certainly just beneath them. Since it's been a little while since I've read them and because I don't really have time for a re-read, I'm going to have to do a review of the series up to book 6. Hopefully my fellow bloggers will read my review and do their own reading and maybe add more individual book details  (*ahem* hint hint)


Victoria “Victory” Nelson was a police detective – and an extremely good one. Her nickname wasn't just a play on her name, it was an acknowledgement of her extreme skill. She and her partner, Mike Celucci, had a competitive, almost antagonistic but deeply connected relationship as they solved case after case. Then Vicky developed a degenerative eye condition. Her peripheral vision is shrinking and her night vision has reduced to almost nothing – and it will get worse and worse until she is blind. Facing this, Vicky quits her job because she will not accept a lowering of her performance or record and becomes a private investigator. Mike stays on as her contact, her friend, her sex partner – and someone she has marvellous blazing rows with.

As a private detective she stumbles upon the supernatural world – in particular she runs across Henry Fitzroy, bastard son of Henry VIII, romance novel writer – and vampire. The two start investigating increasing supernatural occurrences that threaten Toronto, her with her vast experience and skills as a detective with his age, experience and knowledge of the supernatural world. Over the books they investigate demons, sorcerers, mummies, werewolves, werewolf hunters and even mad wannabe Doctor Frankensteins

Through this, Vicki develops her in depth relationship with both Mike and Henry – with Mike himself becoming more and more involved in the supernatural world – as well as their interactions with the ex-street kid Tony.

I do think the whole supernatural detective thing has been done and done and done and done and done. Really, I'm more than a little tired of it. However, this was well done – Vicki is an interesting and compelling character. Her relationship between her, Henry and Mike was one of the few “romances” I found increasingly interesting because it was so much more nuanced and real and less sex-based than is typical in the genre. Normally the relationships in the genre don't do much for me, but this pulled me along and interested me – along with the plots, along with the crime detection and along with the deep, wide world. Basically, a lot of these tropes and themes have been done before – but Tanya Huff does them well and adds sufficient twists to them to make them compelling and interesting.

Most of the characters all felt very real, very natural – Vicki was very believable, strong and unabashedly a very real person. The relationship and interactions between her, Mike and Henry are very real, very strong – and show some very real characters. While she did do some thing that were, perhaps, ill-advised (often these are linked to her refusing to consider her disability or anger over what she's lost) she never did so in a way that made me want to invoke Spunky Agency. She did some silly things – but in a competent and human manner. Her mistakes came down as human, not a tired and contrived way of showing misguided independence. In particular I generally enjoyed Vicki's competence. Even under threat, Vicki could never be the damsel in distress, she was never the ineffectual burden on Mike and Henry and she always more than pulled her own. In a genre where self-absorbed, frequently foolish and would-certainly-be-dead-if-the-author-didn't-say-otherwise protagonists are all too common, Vicki is a breath of fresh air.

There are several other things I love about this series. It's interesting and unusual to see a protagonist with a disability – though her dealing with her diminishing eye-sight and her growing realisation that she will one day be blind were never the main focus of the books they were always there. She was angry about it, frustrated about it, riled against it, tried to work round it  and managed to avoid any tropes of “oh look my disability gives me super powers” as well as covering several issues like the annoyance of friends telling her what she needs to do to make her eyes better or others telling her how silly she was being with her disability – she nearly always made it clear that they were being out of line. There were a couple of times when she allows people like her mother get away with asking whether her incurable condition is “any better” but she never lets it pass without expressing her annoyance. More problematic is the fact she quit her job assuming she couldn't do it any more and the fact she often goes out at night and there is a lot about being “helpless” since she has no night vision – there's also the issue with how her eye condition is eventually resolved which I won't spoil.

I also love how Vicki is unabashedly sexual and unashamed of liking and having sex. She maintains 2 sex partners for a while – both Harry and Mike – and has absolutely zero compunction about not being monogamous and has no angst about having a “friend with benefits” in fact it is Mike who starts to push the whole wedding ring and flowers ideal and Vicki is quite happy to enjoy sex with friends – even after she begins to form a more established romantic relationship. In fact, strong female characters happen a couple of times from what I remember in the books – not only is Vicki tough, strong, willing to kick arse and endure no matter how much the shit has hit the fan, even side characters like a female kidnap victim who faces sacrifice to a demon, are scared, but ready to stand up and be strong, defiant and angry rather than quivering in a corner.

There are some buts, however. The story is pretty much white white white. From memory I can think of a single POC character – an Asian character for the length of one book, in which he dies. It's a pretty huge erasure in both Toronto and Vancouver.

Henry is bisexual, but his portrayal is highly problematic. We sometimes have flashbacks to Henry's past loves, predominantly women – and the women are strong, intelligent, passionate and powerful figures – but once to a previous male lover. Well, so it was implied anyway, it wasn't as expressly stated as his female lovers. At best Henry's attitude towards him could be called “paternalistic contempt” and the man himself is weak, immature, ineffective and rather foolish. Forward to the modern day, and Tony is a gay prostitute who grew up on the street (because we haven't seen that before). Both Vicki and Henry patronise him massively, treat him as little more than a child and when facing scary supernatural beings, Tommy has been known to run shaking and shivering to Henry's arms in utter, incoherent panic. Contrasting to the strong and powerful female characters and it's beyond jarring. As an added bonus, when harry meets and falls in love with Vicki, he ends a relationship with another woman because he has too much respect for her – but is happy to cultivate Tony and merrily snack on other gay men in random, one off encounters. To top it off, Tony has little independent existence beyond contact for Vicki and blood source for Henry, he's a tool, not even a side-kick.

In short, gay men in these books are weak, immature, child-like and regarded with paternalistic contempt by the protagonists. I would have much rather there have been complete erasure than this extremely insulting portrayal. Tanya Huff also has a liking for the word “faggot” for various arseholes in her books, while they get slapped down, I could do without it, I really could.


On the whole, these are some of my favourite series. It has severe problems in places, problems that are grossly prejudiced on an extreme level. However, the story is generally good and it covers some major issues surprisingly well. Despite using several repeated themes, it manages to do it with originality and new twists that continue to fascinate me. This is a series of books that I would not only recommend, but I would be happy to re-read – and, despite the homophobia fails, I will be reading book 6 when I have 5 minutes together.