Thoughts on the Nine Lives of Chloe King 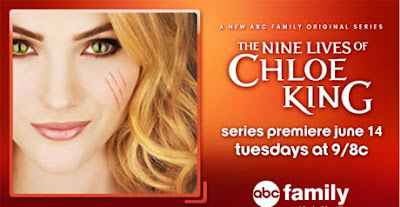 We look at Urban fantasy in both books and on the television - so when we heard of a TV series about preteneratural cat people running around San Francisco we simply had to check it out, didn't we? So I sat down to watch the first 4 episodes and get some preliminary thoughts together.


So Chloe King is a school girl in San Francisco who is descended from the Maia. The Maia are cat-people from ancient Egypt who used to be worshiped like gods, but fell out of favour. They are hunted and killed by some bad guys, one of which is after Chloe. Chloe is a super-special catgirl because she has 9 lives. This makes her the grand saviour of Maia-kind and therefore special. So the bad guy  really has to kill her – and 9 time at that. I hope he gets overtime.
All Maia have cat-like powers – agility speed, claws, senses etc. Oh and kind of based on what I've seen and extrapolating - a general willingness to imply cats have any kind of power that may be useful for the plot
I don't know. I didn't hate it? Yeah, I think that pretty much sums it up. I didn't hate it, though it may be because I have very low expectations at this point. I didn't have to pause it and stomp out of the room in a dudgeon. I didn't fall asleep watching it. But if that sounds like faint praise, it pretty much is. I didn't hate it but nor was I slightly engaged by it, I could (and, I admit, did,) happily read at the same time as 'watching' it – not really surprising since I don't think I'm the target audience.
The plot was, well pretty basic. Big bad guys want to kill the super-special hero. You don't expect subtly from this, but I have to say it went beyond merely unsubtle and hit clumsy instead. We want it to seem like being the Special One is supposed to be an honour, but is actually a great life changing burden? Well, the leader of the Maia, Valentina, comes in with the WORST possible sales pitch ever. It's almost comic how hard she tried to be both kind and sympathetic AND make Chloe not want to be the Uniter as much as possible. I'm sure she could have been a little more blatant – she could have stood up and screamed “BEING THE UNITER IS HELLLL! HELLLLLLLLLLLL!!! AND WILL RUIIIIIN YOUR LIIIIIIIFE!” She could get in some dramatic hand gestures and everything! But then they are being hunted by a James bond villain who, rather than just stab Chloe 9 times while she's chained up and helpless decides to pull the whole convoluted trap thing. Really *stab* ugh... *die* *GASP!* ALIVE AGAIN! *STAB!* rinse, repeat until she stops getting up. Nothing is hinted at, which I don't exactly expect – but nor does it have to hit you in the face either.

Throw in a lot of extra angst of not being able to kiss a human, followed by the oh-so-standard and extra dull complaint of “I just want a normal life,” and we have the complete set of “teenager with super powers is SO HARD GUYS!” Just once I actually want to see a teen find out they're a vampire/werewolf/wizard/cat lady/slayer and say “hey this kinda rocks” rather than wailing about being sooo special.
Chloe herself is a fairly disinteresting character and pretty standard for protags in the genre. Teenager, pretty self-absorbed, self-centered and generally, a very typical character, and a very annoying one. She has a heavy dose of angst, though not as much as some. She shows regular sparkles of Spunky Agency, chasing after strangers alone at night, when she knows she's being hunted, as well as trying to drive away her allies in an angst fest. Pretty standard fair for a protag in the genre. After all, if you don't headdesk at least once per episode from the foolishness of the main character, then something's wrong. We also have the total “I'm the protag so everyone's business is my business” that is again a) typical and b) annoying. On the whole, there's not a lot of depth to be engaged with there.
Chloe's best friend, Amy, has a powerful screech on her and gives me a headache every time she appears. No, really, she appears and my mind yelps and says “here comes the 1,000 mph gossiping and screeching” and tries to bash its way out of my skull. It's a shame, because she can sing, how can such a singing voice be twinned with so much babble? She exists to be Chloe's sidekick, so far she had a brief attempt to make something slightly about her, but the story quickly stepped in and slapped her down so she understands how out of line she was not having everything be about Chloe, as a proper side-kick should.
There are a few of token characters of colour to be extra side-kicks (though, unlike Amy, Jasmine and Paul know better than to try and steal Chloe's thunder and remain locked in orbit). Lorna is a black work colleague, Jasmine is one of the Maia bodyguards, and Paul, a friend and sidekick. We haven't got a lot of fleshed outness here, Jasmine and Paul largely exist to serve others. Sadly, one of those tokens is DUM DUM DUM the villain. Jasmine exists to serve and protect Chloe (and gets injured doing so) and seems to lack any real character. Paul is a collection of geeky stereotypes and Lorna, despite initially being strong and independent, gets rescued by Chloe (after telling Chloe to back off and let her handle her own business, Chloe decides to intervene anyway and saaaave her! See, silly Lorna, Chloe knows your life better, now you be grateful!)
Unsurprisingly, there are no GBLT characters.
I'm also faintly curious as to why the Maia, from Egypt, have so much whiteness going on? Two of them are blond. These Maia can't even breed with humans. There can be no outbreeding since their origin is ancient Egypt – if they even kiss a human being they poison them. So... how did these origins in Egypt end up white, blond and blue eyed? Inquiring minds want to know.
Also, am I being catty (pun!) if I say the acting... isn't all that great? I've seen trees less wooden. Yeah, it's pretty bad. But not comically bad, sadly.
On the whole I'm going to stick with my verdict of “I didn't hate it.” But probably because I've seen/read/watched enough badness to widen my tolerance – and because I'm making strong allowances for not being the targeted audience here. It's pretty standard and typical and just didn't seem to have a whole lot to mark it out as special. I think it ranks a long way behind Teen Wolf or Buffy the Vampire Slayer, or any similar programmes.  This just feels a lot fluffier – popcorn next to hamburgers. And it's popcorn without salt and butter  (and if you are one of those strange people who put SUGAR on their popcorn, well, you are corrupt and WRONG). You're not going to spit it out in disgust, but about halfway down the box, you're going to stop and wonder “what the hell am I eating?!”

Email ThisBlogThis!Share to TwitterShare to FacebookShare to Pinterest
Labels: having trouble sleeping we have the cure, I'll never get these hours back, nine lives of chloe king, unflavoured popcorn