Lafayette and Jesus continue to depress me 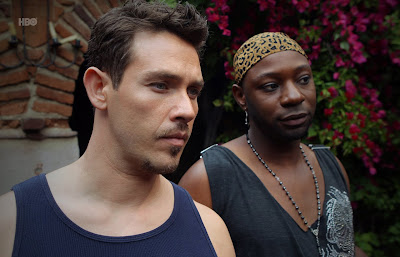 But I'm going to go further in a little rant because I am getting really sick of Lafayette and Jesus and their complete and utter lack of intimacy.

I think this season has really hit hard at how sanitised and cold Lafayette and Jesus' relationship is. It's now so glaring that the characters now irritate me immensely and I'm begging to want to skip past their precious little sanitised platonic, don't-put-off-the-straighties 'relationship'.

The most glaring example of it is the lack of any kind of sex or physical contact between them. True Blood is very free with displaying sex and nudity and it’s a very sexually charged show. In this series we've seen Sookie, Jason, Alcide, Eric, Bill and Sam naked. We have seen Sookie straddle Bill repeatedly, Jason spent pretty much the entire first season naked and having sex from numerous angles – and I'm sure we all remember Eric's bondage session in the basement (I know I do). Sex and nudity is extremely common on this show. But not just sex and sexuality, couples, coupling, kissing, intimacy – it's there.

Now look at Lafayette and Jesus. They have yet to share even a serious kiss. Most of the time they don't even touch. Even Arlene, Terry and Andy Bellefleur have all had more action than Lafayette and Jesus. Contrast that with Tara and Naomi - we have gratuitous sex displayed instantly with the same-sex female couple (almost before we knew Naomi's name or any kind of relationship was established). We rarely see them together in a scene when they are NOT kissing, having sex and happily naked – happily pandering to to the straight male gaze.

Someone coming to this season without seeing the previous seasons would be forgiven for thinking they were friends or room-mates. There’s no sense of them actually having any kind of relationship, it’s rare you see anything from either of them that indicates they have anything other than a platonic friendship - even less! Friends generally have a greater sense of connection between them than this supposedly year-old couple. Even beyond the physical distance, there’s just no rapport between them. No pet names, no internal references, no in-jokes, no body language communication - there’s no connection between them, no sense of unspoken understanding. Where’s the eye-contact? Where’s the facial expressions that communicate a whole conversation? Where is the connection, the relationship, the sense that they are actually a couple. Look at Arlene & Terry - they look at each other, they are connected, they react together, the communicate non-verbally, they seek closeness together. Even Sookie and Eric/Bill communicate a lot with eye contact - in fact that was a major part of the conclusion of the last episode when Sookie made dramatic eye-contact with the vampires. And this is very glaringly missing from Lafayette and Jesus’ relationship, beyond the physical distance and lack of intimacy.

And this is beyond glaring now. Never mind that for most of this season, Lafayette and Jesus' “relationship” has consisted of Jesus nagging and prodding Lafayette to going places and doing things he didn't want to. Never mind that last season the best they could manage is a slight kiss under low-light (never in full daylight! Never that!) Never mind that this season has shown less affection between the two than you'd expect from siblings. Never mind even them getting into bed wearing more layers of clothing than Arctic explorers (in Louisiana!). No, even without all that, the last 2 episodes have just put the icing on the cake

If Beloved were going to walk into a life threatening situation, into a building protected by a killer ward, to meet a powerful, highly dangerous person who has killed and kidnapped people I wouldn't give him a quick peck and wave goodbye.

If Beloved had carved up his arms to save lives, had his arms burned and was stood in obvious pain, I wouldn't put my hand on his shoulder than lay my head on that hand (got to be careful, almost had meaningful physical contact there!) And I wouldn’t turn AWAY from him to hug Tara instead. He didn’t even get him a bandage or a rag for his injuries!

If Beloved was laid in bed with me, crying and hurting because he'd lost a friend and considered himself responsible for his friend's death, I wouldn't give a brief peck on the forehead then turn over, AWAY from him! Especially maintaining a good 18 inches between us at all times – seriously, Lafayette's going to strain his neck muscles having to lean over that far for his platonic peck. There was no comfort, no reaching out, even the language is distanced, platonic and lacking in a connection - and it was really jarring.

What does Jesus have to do to get a hug here? Well, we know - because the closest we got was when Lafayette held him in Mexico after Jesus was bitten by a venomous snake. Better stock those snakes! Even when alone, in their own bed, after a year of being together? This can’t even be excused as a closeted

I don't know whether it's the writers, whether it's caving to the straight whining we've seen over True Blood being “too gay” or whether the actors, despite auditioning to play gay men, just find teh gay to be tooooo icky, but this Amuses Me Not.
Posted by Sparky at 12:00 PM