Review of 'Nightwalker' By Jocelynn Drake, Book One of the Dark Days Series 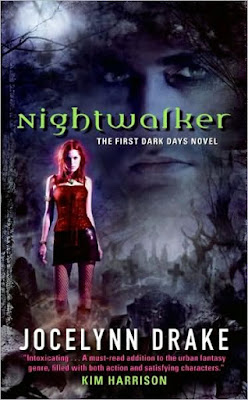 Though this book was written in the first person, a style I really don't prefer for a story, it had a very large world.  Drake takes care to include lycanthropes, vampires, witches/warlocks and the fae.  The fae in this story are called the naturi and as a group from the antagonist, though they are split into several different clans like animal, and earth for instance.   Nightwalker is essentially the story of an ongoing war between the fae and all other supernatural creatures.  The fae have the ability to control lycanthropes essentially turning the into slaves and there goal is to open a door to a dimension that was previously sealed by the vampires.  Their goal is to rule the earth and eradicate the Nightwalkers.
Mira is alone in her own kingdom ensuring that the vampires obey the rules and keeping peace between the vamps and the lycanthropes.  She is 500 years old and is the oldest vampire in the Americas.  What sets Mira apart from all the others is not only her age, but her ability to start a fire with her mind.  As long as she can see someone, or an item for that matter, she has the ability to incinerate it.  Mira is also one of the few nightwalkers to win her freedom from an ancient.  Her fragile world is ripped asunder when a hunter named Dannus enters her territory killing vampires, and bringing the news that the Naturi are back.
Having once been captured and tortured by the Naturi, Mira suffers from PTSD.  It manifests in things like night terrors.  I think that this is key, because far too often in urban fantasy, characters suffer absolutely traumatic events and then walk away as though the event itself was as harmless as taking a nap.  Drake does an excellent job of making the reader feel Mira's pain and her fear.  There is no rising above to conquer the past, it is simply something that Mira must negotiate throughout the story.
We also have a budding romance between Dannus and Mira, though they have sworn to kill each other.  At this point, we have no idea what Dannus is, though he belongs to a sect who have been studying the supernatural for centuries.  Dannus was alive during the Roman Empire, and is even older than Mira.  He is an extremely interesting character.  Dannus begins the story seeing the world in a simple binary of Black and White having had much of life's path influenced by religious figures but once meeting Mira, he must consider that the world is filled with greys he had not previously considered. Their relationship suffers set backs of trust and respect is something that slowly earned rather than given.  Unlike many authors, Drake avoids the whole love at first woo woo and takes the time to build a relationship.
As a protagonist, Mira is very strong.  There is no spunky agency, for which I am extremely thankful as that trope is tiresome at best.  More than anything, she wants the freedom to live her own life and make her own decisions.  She does not want to be beholden to anyone, but forces larger than her have decided otherwise.  Mira is what one would consider a keystone as she is the center to a plot to free the Naturi as well as the key to keeping them trapped forever in another dimension.  All around her seek to use Mira to their own ends and yet she retains a sense of honour about how and why one must engage in battle.
Nightwalker essentially spans the globe and that means that for once, there are actually people of colour.  Not only does Drake ensure that there are characters of colour in her story, they have power. At no time did I find myself wishing that Drake had not taken the effort to include us, which again is something that is rare.  In terms of inclusion, Nightwalker did fall short when it came to the inclusion of GLBT characters, which is an oversight that I sincerely hope will change in the books to follow.
Nightwalker was not a long book, coming in at just 244 pages, however; it was at times a touch repetitive.  I found that this stalled the story, when I all I really wanted to do was move forward.  The characters were complex and extremely well rounded.  As an introduction to a series it was excellent because I found myself wanting to know more about them and where they all fit in Drake's complex world.  Those who like stories about the fae, will enjoy the interesting new twist that Drake took with them.  All in all, I would say that this is an interesting series, and I look forward to seeing where this story goes.