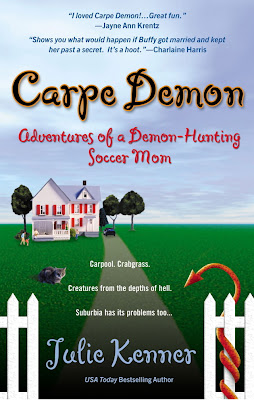 Katie is a suburban housewife. She has a 14 year old daughter and a 2 year old son and a husband who loves her dearly – and she spends her life holding her family together. It’s hard work, but she meets each days challenges (more of less) successfully.

She even manages her husband’s political ambitions, being called upon to host elaborate dinner and cocktail parties (often at ridiculously short notice); very essential to get all the proper endorsements. And, of course, she and her daughter are still dealing with the ongoing grief of losing her first husband that has never quite gone away. It’s an involved life.

And then the demons show up. Once, she worked with the Vatican, she was a demon hunter, a trained killer, lethal fighter who sought out the demonic and slew it, banishing it from the world. But she’s retired and hasn’t fought in over a decade – she certainly never thought she’d have to fight in San Diablo, which she had chosen for its lack of demons.

Now she has demons threatening her family and, worse of all, a higher demon that is seeking to destroy the whole city and she’s the only hunter spare. No matter how rusty her skills, how frustrating the investigation or how difficult it is to schedule demon slaying in between play dates, Katie has to step up.

One thing I love about this book is how much it makes it clear that being a stay-at-home mother is not, in any way, laziness or easiness. Societally we have a strong level of contempt for “women’s work” and a woman who doesn’t work but stays at home with the kids is often regarded as being lazy or somehow failing. Indeed, housework and childcare about both labour that is highly devalued and disrespected despite how essential it is. Katie spends her life bouncing from appointment to appointment – ferrying children about their lives, caring for her toddler who constantly demands her attention, cooking, cleaning, advising and observing her daughter, dealing with the sudden parties her ambitious-politician husband keeps throwing at her. And she alternates this with constant guilt and pressure that is so often understated – is she the perfect politician’s wife? Is she the perfect hostess? She put the baby down in front of the television, is that bad parenting? Did she tell Allie the right thing? It’s a really good representation of the pressure she’s under.

Then throw in demon hunting and she’s well and truly snowed under – the constant battle to fit in all she has to do in her normal life and still do what’s necessary to stop Goramesh is really well portrayed and pretty uncommon in the genre. Usually, an Urban Fantasy protagonist is able to dedicate their full lives to the mystical drama du jour. If they’re overwhelmed it’s because the mystical drama requires a lot of work, or they have several mystical dramas at once. It’s rare for it to actually be their own home lives that intrude on their supernatural lives.

The problem I have is that, while it’s a wonderfully unique concept, I’m not sure the story reached the same level. I enjoyed it, it was fun and fluffy and carried those important messages about motherhood, but it was also a little rambly. Part of that served extremely well to cover Katie being both out of her depth with the research and the sheer amount of work she had to do as both a mother and a hunter – she was hassled, she could rarely focus on one task, she had far too many demands on her time. This was great thematically, but storywise, it constantly felt like we were being pulled off on tangents and not advancing the real plot very quickly.

It is difficult to criticise it as a pacing issue because it is an important element of the plot itself – I’d even say that the tangents are the distraction are the dominant theme of the book. So, while the pacing drags at times, I think it is meant to.

Katie herself is interesting and pretty strong – she’s not flawless or perfect, she does make mistakes and she does have worries. She also makes decisions that seem, well, a little ridiculous – (trying to reveal a demon at dinner? Hunting a hellhound in the middle of the night? Bringing Eddie home from the retirement home?) but they are very true to the character (by and large) and even if they don’t make a lot of logical sense, they do make a lot of personal sense.

Inclusionwise, we’ve got pretty much nothing, alas, perhaps a Latina cleaner who is referred to but never seen. All of the cast is straight and white and we have a couple of problematic (and unnecessary) moments as well – Katie saying she’d worry about Timmy watching “four gyrating Australian men” if he was 15 and later her martial arts instructor creating a fake Asian owner for the sake of the PR.

Storywise we have a moderately standard plot – there’s a precious thing that the bad guys are trying to get their nasty hands on, and the good guys must find it and secure it first. But, then, that’s a very broad summation and there is a lot more in the details – especially with some twists (and a red herring that twists extremely at the end). So even though it seems to fit a standard pattern, it definitely has some originality and twists – both with Katie’s attempt to balance her life’s obligations, her suspicions that the demons had infiltrated her home, her worry about keeping her children safe and the simple taxing task of getting back up to full skill level after so many years inactive. Which is another original element of the story – the protagonist is approaching 40, which is very rare in Urban Fantasy.

The world building is interesting – the incorporeal demons looking for an opportunity, the cost of manifesting, of possession, of displacing a human soul – and we have more than enough hints of a lot more to come. I like this world, it’s different – it isn’t broad and rich yet, but it has hints that it might be; and it also means we weren’t bogged down with the worldbuilding.

All in all, it’s a decent book and it’s a fun book. But the tangents, pacing and wordiness, sadly, detract a lot from it. It covers its issue excellently, but it doesn’t move as fast or as smoothly as we’d like to see. It bogged down a couple of times and there was a sense of the plot stalling.