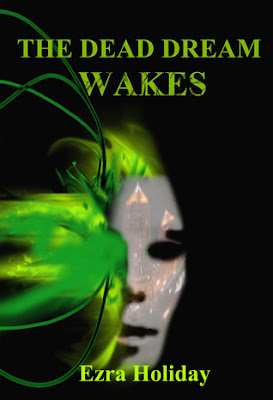 Jonah and Clay live in the city of Bridgeport and have recently been brought together – by an abandoned factory. It haunts their dreams with horrors, it looms constantly in their consciousness. When they pass it they hear ominous music that fills their minds, and even standing opposite it they feel compelled and pulled towards it. They can feel the menace and horror of it but cannot resist it.

They try to research it, but inevitably are drawn inside in the face of its escalating influence in their lives – and the greater threat it poses.

Inside the factory they find a gateway to a whole new world, a world that impacts everything around them. It’s through the looking glass but far darker and the difference between dreams and reality seems to be fuzzy in the extreme – to say nothing of what reality is in the city of Bridgeport? What is real – and, more telling, who is real? How much of their memories and history are real? And what is actually behind this force in their lives and what is its agenda.

This book is elegantly crafted. The prose is beautiful, evocative and nearly poetic. Every description is carefully and artfully put together. We have amazingly vivid and detailed dream sequences that add to the aura of menace and add volumes to the setting – the books theme of the surreal, the weird, the dark and of reality not truly being real and of vast dark forces that are not only unknown, but possible even unknowable.

The characters are also extremely detailed. We have a lot of their backstories, their inner thoughts, what makes them tick. We see their attitudes, how they’ve been shaped, their histories, their desires. Along with the dreams, we have stories and experiences that further build to the dark, gritty theme, the strong sense of other. All of the surreality of it, the dream-like nature and the grimness gives it an almost Alice Through the Looking Glass feel – but far far darker.

If you like all this, the evocative descriptions, the heavy foreshadowing, the powerfully crafted scenes and the incredibly maintained theme that permeates every page then you will love this book.

Unfortunately, for me, none of these elements are remotely positive enough to balance the book’s terrible pacing. All these descriptions, the backstory, the foreshadowing, the insight is wonderfully thematic and world setting and character developing but it completely drowns the plot. I can respect the theme – I’m impressed by it. And I love how it raised the idea of reality not being what the characters though, of the dream-like feel and definitely the “through the rabbit hole” feel of the book. But it was slow. No matter how much I am impressed by the excellent writing, the world and the theme, it doesn’t change that I was bored waiting for things to actually happen, waiting for the foreshadowing. I appreciate the artistry of it, but I didn’t enjoy it.

We spent far too long in the beginning waiting for something to actually happen. There were lots of dreams, lots of backstory about Clay (short for Claire… no that doesn’t make much sense to me either) and Jonah. There were snippets of their lives. And lots and lots of ominous foreshadowing about the abandoned factory, then their attempts to find out some information about it. This goes on for a painfully long time and there’s a lot of telling (in wonderfully descriptive and emotive fashion) rather than showing – the factory is ominous and scary because Clay and Jonah say it’s ominous and scary.

The plot, when it happens, is also disconnected. Again, and I really cannot stress this enough, we get this amazing feeling of surreality, of strangeness and darkness and fear – but the plot is driven by Jonah and Clay feeling compelled to investigate and delve deeper in then running across a series of disturbing and dangerous encounters – which become darker, stranger and more odd by each turn. They confront humans and monsters and suggestions of gods and find oracles and a whole new world lying beneath the city that is so different from anything anyone could imagine – but they wander into it.

None of this is explained (or partially explained, rather) until the closing chapters of the book. And that explanation is a doozy; that puts everything, from the foreshadowing to the dreams to the utter weirdness and alien-ness of the city all into context. Everything is explained, everything comes elegantly together – and suddenly we have this deep, rich original and incredibly unusual world poised for more to come.

Inclusionwise – it’s all straight and the POC are villains; really unpleasant villains at that. It’s not good at all.

In the end, this book felt almost like a really impressive haute cuisine dish. It’s elegant, it’s taken some incredible skill, it has some exotic ingredients and it is a true work of art. But it’s not very filling and you’re probably going to want a pizza afterwards. It’s faffy and impressive, but there’s not enough substance there.