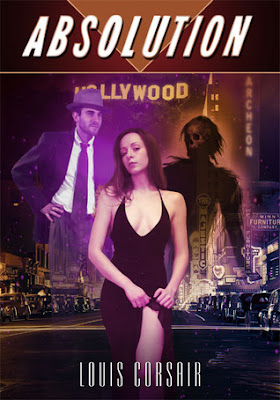 Adams died in the 1950s. When he was alive he was a detective, not just a detective, but a poster child detective straight out of film noir, every cliché faithfully followed. His afterlife was less than ideal, having died with corruptive sins on his soul, he was banished to the Abstract realms where the Enigma tested him over and over to try and give him a chance to ascend and join the collective whole. It was better than the damned in the pit, but even so Adams was becoming desperate as his ascension is stalled and he risks dissolving into shadow.

But the powers that be have a task for him. The son of a Pit Lord has been killed on Earth – not just killed, but his soul has gone missing as well. The Pit Lords don’t trust the usual enforcement arm of the Process, the Enforcers, to investigate the death – so the task falls to Adams. Only he only has a day to do it in. And he’s 60 years out of date.

Not only does he have to get up to date quickly and delve into the very depths of the Hollywood sex trade, it also becomes apparent that the conspiracy is far deeper than he imagined, going up to the very top of the Process and an actual civil war between the entities that control the Process may be on the cards – if the Process itself and the very structure of the afterlife isn’t irrevocably changed. And, on a personal note, it’s a plot that comes round to touch his own afterlife, and that of his loved ones.

It’s a wonderful game of who to trust, find the red herring and see what the true plot behind this death – or deaths as the body count rises – truly is.

This book is genuinely unique – and that’s a rare thing in the genre where so many books seem completely formulaic.

The world, with the different echelons of celestials each with their own remits, is not something I’ve seen before. Even the method of the process with the different factions fighting and sniping at each other, is fascinating. I love the rivalry between the pit lords and the enforcers and the really real sense of conflict and tension brewing between them all. I also like that we have a lot of world hinted at – with an original goddess and a nod to the mind set of the absent leader of the council.

And the world is challenged, even the nature of torturing the souls in the pit progresses from “they get what they deserved” to a realisation of how many of them were just in the wrong place at the wrong time.

It’s also good to see a genuine detective novel. Not a “I’m going to be a nuisance until someone tries to kill me” investigation that we see so often. Not even a “I’m going to use my woo-woo to find the answers.” But a good old film noir detective slog, following leads, chasing down clues, following up even the slightest piece of evidence all the while with forces working against you. I love his stubborn refusal to follow the advice of the people trying to manipulate him and I love how he bounces off Jenn – his erstwhile assistant who works so well into his story, especially at bringing him up to date.

And the story is elegantly written. It’s full of classic red herrings that all turn round to be connected legitimately to the story – even to the actual main plot. It has a completely unpredictable ending, with many real characters and twists that follow twists that follow twists. It’s Noir at its finest, it’s a detective story that truly involves detection and it’s an action story that keeps hold of its mystery and its puzzles. The conspiracies are completely beyond what I imagined first picking this book up and it was a book I genuinely wanted to keep reading to find the answers.

The pacing is excellent, with enough action to keep it exciting without swamping the actual investigation, enough world building to keep it interesting without drowning us in exposition and enough character development to add realness but without overwhelming us with flashbacks. It was really well balanced and a fun read.

Our protagonist is a 1950s detective right out of film noir. Which means we get that full cheesy  monologue. All women are “dames.” Men are “cats” or “birds” (which is a new one to me). And I cringed – because if someone’s going out of the way to make a 1950s authentic character and include a lot of minorities, well that’s messy.

But it generally wasn’t. We, shockingly, DIDN’T have a femme fatale. We didn’t have those extremely long, over-dramatic descriptions of just how hot a woman was and while he repeatedly tries to protect and shelter Jenn, she also continually ignores and refuses his attempts which he accepts ruefully.

Similarly, while he expresses surprise about, for example, a Black president, he doesn’t express disapproval, disgust or anything negative – he is surprised at the changes, not disapproving of them. He uses language like “colored” and “Mexican” but is corrected and told to say “Latino” and he adjusts his language accordingly (which, sadly, is more than you can say for a lot of people today). I was very pleasantly surprised

There are a lot of GBLT people in this book – a huge number in fact. And we have a lot of negative and some positive and a lot of complicated.

We also have the problem with his language. 1950s detective who speaks like a clichéd film noir star meets the GBLT community. Uh-huh. But it’s not just him –not only is he not corrected but there’s a massive amount of the same language going on around him. Trans, non-genderbinary people and crossdressers are frequently confused.  Any and all gay men will, at some point, have the word “effeminate” applied to them. And we had a completely unnecessary lesbian cult leader who uses it to get her jollies with young women.

I’m impressed to see trans people in a book and gender-fluid people, especially so many of them. And there was a wonderful, detailed and developed description of one character’s identity that didn’t fit simple binary norms. And it does address issues such as parental rejection and prejudice – but there’s very little challenge of the prejudice and there’s a huge amount of misgendering going on, again, with very little challenge or correction.

I really really wanted to praise this book for the huge number of GBLT characters – because it is extremely rare to find. And there was good there, there was certainly good. But there was also a large amount of cringe-worthy as well. It’s a shame because I really wanted to unreservedly praise the inclusion, but I could not.

Outside of inclusion (and it did have more GBLT people than I’ve seen in any other book I’ve read, it’s just a shame what those representations were) it was a fun read, a fascinating read, an exciting read and an intriguing read – definitely worth reading.

Note: A copy of this book was provided by the Author