Review: The Sword and the Prophet by Missy Larae 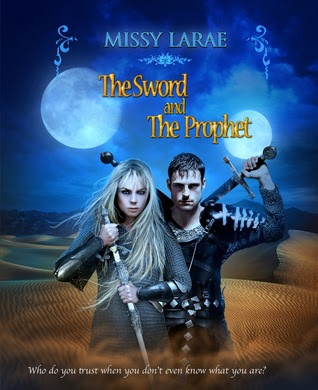 Tyler and Lilly are free for the first time in their 15 year old lives. The twins have lived with their abusive mother who has controlled their every action, constantly beat them down and denied them any interaction with the outside world. Finally, they’ve had enough and are running away to the only relative they know of – their unknown father’s sister.

Everything seems to go to plan, their aunt is considerably kinder than their mother. But then the revelations start to pile up. Not least of which is that no-one they know is human – and they are caught between two powerful warring factions of aliens. Even that seems easier to grasp than the idea that their mother was the good one.

At this point the revelations tear in fast and furious as Tyler and Lilly must flee from the hunters, all the while dealing with massive transformations of their bodies and strange manifestations of new powers. They have no idea who to trust or what is real any more, but their true family is out there.

The world and story are both intriguing in many ways. Normal, human children not realising they’re not only special but not even human? They have to deal with transformations, their entire world being turned upside down. The world is rich and odd – with lots of unique, interesting elements even with its clichés. It has a lot of potential for excitement, emotional impact, epic battles and massive realisations as two abused children discover so much more.

But this book has some severe pacing issues. I’ve read books before where I’ve felt like I’ve been thrown in the deep end, because the book has been going so fast and throwing so much at me so quickly. This book doesn’t  just throw me in the deep end, it ties weights to my feet and then throws things at me. It was utterly overwhelming for the first 40%.

It starts fairly standardly, we follow Lilly and Tyler fleeing their abusive mother and heading to their unknown aunt’s home. Nice and simple.

Then we get aliens. And different kinds of aliens. And the mother’s an alien and the uncle and aunt and then we’re with this alien on another planet telling us about 4 hemispheres and I have no idea where she fit, now the twins are becoming vampires then we’ve got yet another set of aliens and this alien is that one’s son and that alien is a sister-in-law , now back to the twins who have been kidnapped apparently and there’s soldiers… maybe alien soldiers? Then there’s living hair and mega screams and more aliens and pods and elements and some yet more aliens running to help…

I had to put it down several times. I felt vaguely beat up and out of breath trying to keep up. There then follows this mad race, a much more sedate reasonably paced part of the book that is full of info-dumping. All of the info-dumping makes sense since Lilly and Tyler are being educated in their nature by Talon. But it would have been nice to spread some of that information around – I actually skipped back and re-read the first part with the new knowledge, which helped a lot.

After this we then get 20% of rather slow pacing. There’s lots of threat but not much action as they gently move towards really inevitable meeting up with the aliens.

The problem here is the second main problem of the book – lack of development. We had some development of Lilly, virtually none of Tyler and absolutely none of anyone else. Even then, actual development is rather overshadowed  by constant break neck action. The problem with this is I was never able to connect to any of the characters beyond their names. That’s all they were to me – names, I didn’t become even slightly invested in them. Maybe if we’d seen more of their lives and thoughts and feelings – beyond Lilly’s constant fear and doubt – it would have been easier to connect. I’m not saying she didn’t have reason for both, but that’s all I saw of her, fear and doubt – which makes her hard to relate to.

As it was, without those connections, all the heavy emotion of the end of the book was rather lost on me. It was like watching the very end of a feel-good film you’d just missed – everyone’s going “awwww” but I’m not feeling it. Similarly, the emotional tragedy has roughly the same impact as learning Aunt Ethel’s budgie had died. It’s sad and all, but it’s not exactly upsetting or plucking at the heart strings.

The lack of development made a few other things fall flat – including the tragedy of the twin’s upbringing, the nature of the good aliens and, especially, the nature and motivation of the evil ones – because that’s what the end up as, just evil. There wasn’t enough depth

Inclusionwise it was completely erased. And I didn’t like that Lilly seemed to be considerably meeker and in need of reassurance and comfort than her twin brother. It seemed she was getting constant comfort and reassurance – and needed both – but Tyler, who was going through and had gone through everything she had, was the caregiver and hardly ever the receiver.

This book had a lot of potential. We had a world that had had some thought built into it. It had some sci-fi tropes, but it held together well and could have been a nice, fun, epic cheesy sci-fi romp. The characters had potential, going from human to a whole new civilisation with all of their preconceptions challenged. We could have had epic battles and grand revelations. It had all this potential

But it wasn’t realised. The pacing and lack of development meant that the book just ended up not being very fun or very easy to read. It needed to slow down, it needed to introduce us to the characters and it needed to explore the world not dump us in the middle of it with like some literary version of Survivor.

Note: A copy of this Book was provided by the author for review
Posted by Sparky at 3:00 PM