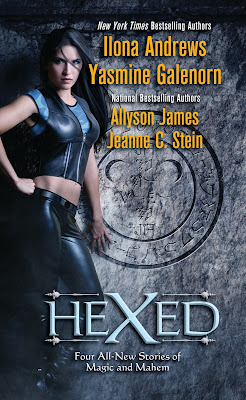 As with our previous reviews of anthologies we’re going to take each story separately then look at the book as a whole.

I have read Ilona Andrews Kate Daniels series and I loved it. So already a novella set in her excellent world was always going to go down well with me. This book follows Dali, the White Tiger shapeshifter and Jim, werejaguar and alphas of the cat shifters. After an outpost of, shifters is destroyed, Jim goes to investigate and is infected with a curse. Dali, as the pack’s only magical expert, sets out to undo the curse and face down the creature that has claimed him – despite her own doubts and having to enter dangerous places where White Tiger body parts are highly valued.

For someone who has read her books, this story is excellent. It takes 2 of the side characters – Dali and Jim – and expounds upon them. We get a lot more insight into Dali’s character – and she’s always been one of the more intriguing with her calligraphy based magical system, the frustrations of being a white tiger with all this supposed potential and never feeling she meets it – and being a vegetarian, half-blind tiger in the first place. I like Dali, always have – she’s strong, spunky in a “I will prove myself and I won’t be limited” kind of way, brave with doubts but determined to prove them wrong.

For someone who hasn’t read the book, I believe this will be extremely readable. By choosing 2 side characters, there’s no need to be acquainted with the series to get a handle on the back story. The world is complex, intricate and amazing but it is excellently portrayed, doled out in small doses with occasional moments of exposition that neither dragged nor overwhelmed and nothing was told that was unnecessary to this short story. We don’t have 6 books work of world building crammed into a novella.

When it comes to racial inclusion, it was also a great story – Dali is Indonesian and we see a number of different Asian cultures and characters, Jim is Black, in fact, I don’t think there was a White person in the story except as side characters. All in all, an excellent short story and if I weren’t already hooked on the world, I’d dive in.

Like Ilona Andrews, I read Yasmine Galenorn’s Sisters of the Moon/Otherworld series and enjoy it. This book follows Iris, the house sprite, delving into her past as a priestess and addressing some of her secrets. She was banished from the priesthood a long time ago when she was accused of killing her consort. Without her memory, she couldn’t tell if she were guilty or not, and even torture at the hands of the priestesses did not break her memory blocks. Her lover was turned into a hungry, evil shadow preying on the people of the Northlands. She is determined to track down the shadow and set him free – and in doing so, confront her possible guilt once and for all.

In this case, I’m glad I read the series because I think this book would have been hard without it. Iris is accompanied by Rozurial the incubus, Smokey the dragon, Camille the half-fae witch and Howl the Elemental Lord. Already that’s not only a lot of characters, but that’s a lot of character’s whose natures need explaining. Rozurial at least could easily have been dropped – and this could have easily been Iris on a solo quest with Howl as a guide. Worse, the book frequently references events and characters in the main storyline that just aren’t relevant and give more information than is necessary. As someone familiar with the books, I recognised them, but someone not so aware risks tripping up.

I am glad to see more of Iris in the story, especially since in the main series of books she’s a side character who is often called upon to help but not as a protagonist and the story itself is interesting. But it could have been tighter and, inclusionwise it was, again, completely lacking.

I have never read this series or this author before so was intrigued – and there was a lot of good here to pull me in.  Janet is running her hotel with her usual compliment of guests and staff – when the plumbing starts bleeding and they can’t leave the building. They have been cursed, and it’s a curse that is slowly eroding their self control and is clearly not going to end until someone dies. It’s now down to her, a witch, a dragon, the god Coyote, a vampire and a plumber to try and find a way out, to end the curse, before they all kill each other.

But, first and foremost, as someone new to the series there were far too many characters here. This is a short story, it did not need 10 characters. Ten is far too many, especially since they all seemed to be important characters with back stories and more. I felt swamped – and it only got worse when yet more were referenced who didn’t have any input on the story – the Dragon Council, their servant, the bartender across the street, her sculptor, her chef. It’s just too much to expect a brand new reader to adapt too.

Similarly, for a new reader I’m not sure if the character behaviour presented is typical or not. The curse exacerbates the feelings and tendencies of the characters – so Cassandra spent the whole book as an emotional wreck, for example. This left me not really knowing what these characters are supposed to be like and whether their irritating tendencies are typical or just because of the curse. In particular, Janet’s lover being extremely “protective” and jealous irked me along with the alpha male posturing of him, Coyote and Sheriff Nash. As did Janet’s constant thoughts below the belt – and need for them to have sex – in a life and death situation.

It’s a shame because the story itself was excellent and the world presented was amazing. I definitely intend to look up this series – I want to examine this world more, get behind it and see these characters as they should be. It’s also extremely inclusive with a large number of POC with some culture behind them and a lesbian couple, which is a lot more than most series, let alone most short stories. The only irritants I found were a snarky joke using “transvestites”, a snap at Janet as a “crazy Indian” and the Magic Mirror… The magic mirror is referred to as “it” by Janet but as “he” by other characters and he’s clearly attracted to men and women by his sexual leering. And he punches every single offensive gay stereotype there is – including singing show tunes.

This is definitely one I will be checking out.

This is another author I haven’t read so do not know the series. Anna is a vampire, a private investigator and a bounty hunter. Recently she hunted down and killed someone who was threatening her family and was already responsible for killing many innocents. She thought it was over, until she learns that someone has been kidnapped and held hostage until she presents herself to the powers that be. The witch she hunted down was in sanctuary at the time and violating that is a major crime – one she is held responsible for.

The character is interesting, the world setting is interesting and the story is, again, interesting – which makes me want to read it rather than it’s recap. This short story is a trial where her activities in a previous book are judged – these activities are summed up in this book and comprise most of the plot with a little twist at the end and a romance glued on for good measure. I vaguely feel like this isn’t a story so much as an actual summary of a previous story – and while I’m interested in checking it out, I also think I’ve already read the entire plot and it has been spoiled for me

It’s an interesting, albeit highly erased, story – but it’s a poor choice for an anthology. Old readers already know the story. New readers have just been handed a book of spoilers.

All in all, I think the book did an excellent job at introducing us to different world and different settings and it was a perfect show case of the authors’ skills and words they have created. If there was one criticism I had it was that too many of these stories contained too many spoilers, too much information and were just too enamoured in showing us all of their source world when a more concise telling would have been better.