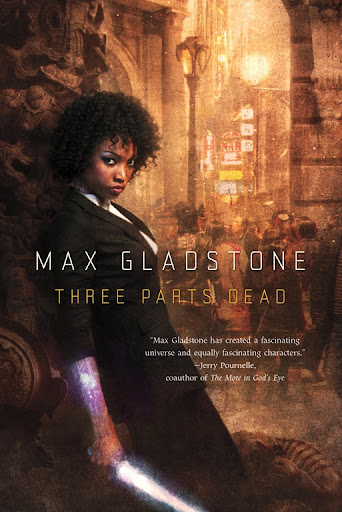 Three Parts Dead is outside of our genre, as it falls squarely into the category of high fantasy, rather than urban fantasy, though it does include mages, vampires and gargoyles.  In an alternate earth there are Gods which are worshiped for their ability to provide for human society.  Essentially a legal contract is formed with a God in which they agree to provide certain services for worship. The crafts people are in charge in writing these contracts and ensuring that the letter of the law is followed.  When Kos dies, it endangers the city of Alt Coulumb. He must absolutely be resurrected but with various claims on his person, this is going to be difficult and Kos will not necessarily come back as the God Alt Coulumb knows.

Tara who is an associate at international necromantic firm of Kelethres, Albrecht, and Ao is tasked with bringing back Kos and arguing the side of Alt Coulumb.  With the help of Abelard, a priest who practices his faith by chain smoking, they must take on Tara's nemesis, and deal with gargoyles who have their own claim to Kos' body.

I chose to read this book because it was recommended to us and the cover showed a Black female protagonist.  Let's be honest, people of colour are highly erased in the fantasy genre and when they do appear, they are most often sidekicks.  Had I not seen the cover of this book however, I would have no idea that Tara is Black.  I understand that in an alternate world, markers of Black culture would most assuredly be different but non-existent does not make sense.  I don't even really remember a descriptive passage in which we are told what Tara looks like.

I really wanted to like this book, but I feel that Gladstone got to caught up in his own story.  After about 60 pages in, I actually started to wonder whether or not I was reading the second part of a series rather than the first book.  The fact that I had to turn to Goodreads to confirm that I was really reading the first book evidences a shortcoming in how Gladstone chose to frame his world.  There was not nearly enough world building and I felt as though I was reading an already established cannon, rather than being introduced to a new world. I constantly felt like I was missing something and the story didn't really pick up for me until about the two hundred page mark.  Having to read 2/3 of a book to get some excitement makes for a slow and boring read.


On the plus side, all of the female characters in this book were incredibly strong.  There was no spunky agency and each character used their talents to their best advantage.  I did however have a problem with a rape analogy which was used.  Cat who is Justice (note: her body gets taken over by the remains of Goddess and she dispenses justice in the city of Alt Coulumb) is addicted to being fed on by vampires. This fills the void that is created every time she takes of the Justice suit.  In one scene, she is sent to check on  Captain Pelham - a vampire and she uses this opportunity to feed him her blood.  Apparently, even at rest, if offered blood a vampire's instinct is to feed. When he awakes and realises what cat has done, he is upset.


"What the hell were you doing?"
Cat's mouth fell open.
"What I mean." He wiped the blood off his chin with his fingers and regarded it in fascination and disgust.  "Seriously, woman.  What is wrong with you? Haven't you ever head of consent?" (page 200)

Of course he immediately identifies Cat as an addict. In this world, humans actually pay vampires to feed off of them.  I think that consent is something that is very serious that should not be played with. I'm not sure that this case rises to this level especially because what she gave him, is exactly what the captain needs to live. I am furthered troubled by a man lecturing a woman about consent when in the world we live in, clearly it women who have an overwhelming history of being violated by men.

In the end, it was solely determination to finish this book rather than a desire to see where this story was heading that got me to the end of Three Parts Dead. There was just so much that went unexplained that it was really hard to get into this story.  I enjoyed the framing of religion in this story but at the same time, it was so intricate that I found myself pausing and re-reading to assure that I was understanding the information being provided.  If one is going to write an epic story, then pulling punches is not the way to go.  I understand not wanting to go beyond three hundred pages but Three Parts Dead really needed to do that to establish its world and the role of craftspeople.  Even the ending in which the antagonist finally got what was coming to him, left me saying huh because I did not fully comprehend how his death happened.  It really just felt as though Gladstone was winging it the whole way, rather than clearly pacing the story and providing us with the keys to makes it clear rather than opaque blather.