Review: The Night Eternal by Guillermo Del Toro and Chuck Hogan, Book 3 of the Strain Trilogy 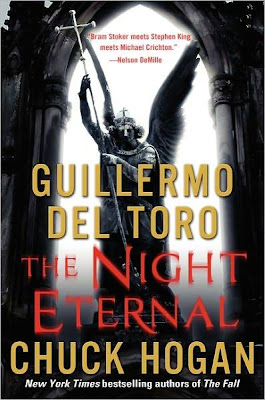 Ephraim, Nora, Fet, Gus and their allies are back in a world that has fully fallen under the Master’s control. Their little resistance is doing its best to fight back, but they’re little more than a nuisance. The world is firmly under the Master’s thumb. There are even camps set up to process humans to provide blood and labour. Humanity, the survivors, have settled into ruts of fear and appeasement, trying to survive under their new masters

Even the skies have been darkened by the nuclear fallouts, leaving only a few short hours of sunlight every day when the vampires are forced to hide.

It is only through the Lumens, the book left by the deceased Stakhian, that they have any hope to finally destroy the master and free humanity. They may have one last chance to free them all.

But while he may be one of the few ready to fight back, Ephraim is falling apart. The stress of the years apart from his son and knowing his son is in the Master’s hands have worn him down and left him dependent on alcohol and pills.

This book has a lot going for it. It has some very realistic, very strong, very emotionally deep characters. It has a fantastic concept that brings a genuinely original slant to the entire concept of vampires. The creatures described are so different to what pop culture has turned vampires into. And it returns very much to the vampire’s root as a source of horror and fear, rather than a tragic, romantic figure.

It has some extremely detailed world building and history, describing the origin of the vampires and what that means and how that is linked to killing them. It has some really strong characters with a lot of depth who truly convey the enormity of the dystopia they’re living in, how much is at stake and how much they’ve lost.

And it has an excellent plot – it has a mystery, it has a goal beyond mere survival, it has action and it has an well maintained theme of grittiness and despair.

Despite all that, I didn’t like it – and I tried desperately to do so.

The first and simplest reason is the same problem that has stopped me enjoying the whole series. It’s long. It’s very very very long. Nothing is described quickly, the language is evocative and very very descriptive giving you a full and very immersive feel to every scene. You can practically see the location and every emotion the characters feel is presented in the fullest detail, making it all very very real.

And very very slow. I won’t say the writing is bad, because it’s not. It really does give a wonderful impression of the locations and the settings and it tells us everything the characters are feeling in great depth. But it does TELL us a lot. Through internal monologues  that seem to go on for pages, we truly learn every nerve wracking, near breaking thought going through each character’s head. This isn’t always a bad thing – it was probably the only window you could see Zack’s slow transformation, for example – but it was done with every character and it was so very slow.

In a book where the monsters have taken over and the survivors are racing to find a solution I find the general slowness and need to dip into nearly every character’s head for a long long long exposition of their feelings just destroys all the tension. I can’t run with the plot because I’m bogged down by the internal emotional drama. It’s too much, I’m drowning in it and can’t go along with the story because I’m just lost in their grief.

The grief and loss and pain the characters are internally vocalising isn’t wrong, certainly not. It makes perfect sense considering what they’re going through. But it’s all tell and no show. And it’s repeated over and over again. Accurate? Yes. Evocative? Yes. Powerful? Yes. But still so very long.

And made longer because there’s a lot of characters still. They’re not excessive as in previous books (but, really, did we have to have a long detailed description on the astronaut? Really? That was a completely pointless chapter in a book that is already bloated). There’s insights we didn’t need (like Creem and the Sapphires and their ambush), whole sections of the book where the aftermath would have been sufficient (Zack being turned by the Master. The Master’s interminable monologue on the subject).

I was much happier with Nora in the camp and fighting to rescue her and her attitude towards Burkes because it managed to SHOW us her pain and anger, show us her love and concern for her mother and show us the horror the world had become and the collaborators working for the vampires. All this show without tell was a high point in the book, but even this was interrupted by monologues telling us what the characters were feeling when it had already been shown.

This whole show-don’t-tell is such a problem. We saw Gus play his mother’s favourite music and feed her blood – did we need the long monologue about his relationship with her? You’ve just shown it! We saw Ephraim return to his son’s bedroom to look through his things again, did we need to have the gazillion monologues on how much he cared for him? We saw him drinking and popping pills and his not eating properly – we can SEE he’s falling apart and screwing up – but we had to be told it so many times.

Also, it’s the last book in a trilogy. Please assume anyone reading this book has read the previous 2 and stop recapping everything. It’s making a long, slow book even longer and slower.

Possibly related to that is the fact I don’t like the characters, especially Ephraim. And I feel like a horrible person for not liking him. Eph is sad, he’s tortured, he’s falling apart with the loss of his son. His pain is incredible and extremely well describe. At length. On multiple occasions. To a point where I just don’t empathise with him any more – in fact, when we return to his POV I have the distinct urge to give him slap after being subjected to so much of his very realistic, completely well described pain. It puts me in an awkward position of both disliking Gus and even Nora and Fet for so harshly condemning Eph for his near-collapse while at the same time completely agreeing with them and being equally frustrated by Eph’s barely functioning person.

Which, I suppose, says a lot for the writing in the book that it’s accurately conveyed these feelings and made the reader feel them. I should praise that and yet more of the realism – but it doesn’t mean the book was a fun read. The weather report off the North Sea is realistic as well, doesn’t mean I want to read it.

Inclusionwise we had a number of POC among the survivors (though, except for Nora, they were all criminals before the Fall) and Nora is a gloriously pro-active character as the sole surviving woman. Her calling out and fighting of Barnes was glorious to behold. In fact, Nora would have been a hundred times a better protagonist than the eternally tortured Eph. There are still no GBLT people – which is no surprise considering it’s a dystopian.

Reading this series has frustrated me. The underlying story and even the characters are truly excellent. But the excess characters, the over-description and the general long windedness has made it such a hard read and just not fun. It’s a shame.

But, it does leave me hopeful for a television adaptation that I hear is coming. Television does a good job of cutting the bloat in books and we may see these great characters and this excellent story without it swimming in a big pool of exposition.