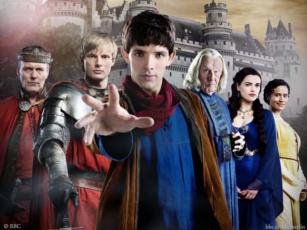 If I were to watch the last 2 episodes of this season alone, they would both be 5 fangs, no question (depressing ending aside – but I do like the reference to the Once and Future King and that old English myth that, yes, one day Arthur will return when Britain – Albion – is in its darkest hour. And then, presumably, lose his shit when confronted with a car and be thoroughly baffled by an Iphone. Still, it’s an iconic legend). They included so much of what I’d wanted to see for so long and were, in the true fashion of Merlin season finales, extremely epic.

The problem was that the 11 episodes before that contained a lot of foreshadowing of those last 2 episodes (which would have worked far better for a whole new season but seemed a bit over the top for there to be 11 episodes of foundation for 2 of content). And the rest was very much more of the same. Evil Morgana who is still evil and still hates them all (she may have upgraded to a level of suffering as well – but she’s suffering and evil now and the vague attempts to present her as sympathetic are quickly backed away from and more evil is brought in). Arthur and Merlin who have the same fun relationship which, yes, is fun and maybe there’s more trust there but it’s still a well established and plateaued relationship. Same with Merlin and Gaius. Great relationships – but already well established and not going anywhere else.

I’m also tired of Morgana always finding evil kings/mercenaries/whatnot to ally with. How does she even recruit them? “Hey, I’m Morgana, here’s my resume of repeated dismal failures. I have no resources, no money and I promise to treat you like shit under my boot for the entire time we’re together. Let’s be besties!” I don’t believe for a second “I am the unacknowledged illegitimate daughter of Uther” or even “I have nifty powers – and still fail constantly”) is really carrying this much weight. Nor her “I’m the high priestes!” yes hon, but you’re also 100% revenge driven which, from what we’ve seen, most magic users aren’t best pleased about (hence why most of her allies AREN’T sorcerers). I’m actually getting a little tired of Morgana as the big bad because the story isn’t changing and hasn’t changed for 2 seasons. Every episode Morgana throws some magical doohicky at them: it fails, woe. Next week we try again. Is this Heptarchy Pinky and the Brain? It has a lot of interesting moments, but once Morgana evolved to “complete evil monster” almost overnight nothing changed much from there and by season 5 it was getting stale.

I think it would have helped if things had developed or been shaken up a bit. Like Merlin being able to openly use magic around Arthur earlier (Merlin even had an opportunity to demand magic be legalised and he chose to take a stab at letting Mordred die instead), or him embracing his powers more or Morgana being developed beyond “I hate you all and you will all suffer, MUAHAHAHAHAHAHAHA!” And we had hints – Merlin standing up to entire bands of men confident in his power, staring down the Dochraid. We had Mordred introduced and a whole load of questions raised with it. Camelot has had peace and stability and Arthur openly challenges and rejects his father’s methods of ruling. There was a lot that could have been developed but instead only got some time in the last 2 episodes, some of which felt either woefully rushed or like a terribly wasted opportunity. Seriously, you’re going to give us 1 episode, 1, of post-magic revelation Arthur and Merlin interaction? The big bad secret that has lasted 5 epic seasons and this is all we get? Gah. And more which wasn’t even developed just kind of waved then disappeared – the 3 priestesses of the old religion, the white dragon Aithusa, the Diamair.

It’s frustrating because all through the season there’s lots of foreshadowing of things changing. Of a new enemy, a new storyline, of Merlin revealing his magic etc etc – but this is the last season. Season 6, with all this behind it (and, perhaps, not so many storylines ended in the last 2 episodes) would have been incredible. But it’s not happening

She has been raised to Queen, they’re finally married! I thought this season would be Gwen front and centre, maybe half a step behind Arthur and Merlin. Instead for the first part of the season she has as much screen time as one of the knights (possibly less) and she repeatedly plays the worrier trying to keep Arthur at home.

Gwen does start getting more screen time – when she turns evil. Now we have her playing almost exactly the same role that Morgana played, (with Morgana stepping in as Morgause) spying, hiding in the background while constantly plotting against Arthur. At least this time Arthur finally believes that he has a spy on board (rather than dismissing Merlin out of hand as he always does) but this is when he believes him? When it’s Gwen, his beloved wife? Now he’s willing to listen to suspicion?

And after her redemption? To the plot box with ye, Gwen! You have had your relevant moment for the season! Yes she shows up again all epic for the epic finale, but there’s a couple of episodes after her cure where she barely exists. This season seems to reduce Gwen to an extra.

And it’s not like Merlin has a good record with women villains already. Big bad season 1? Nimue. Big bad since then has been Morgause and Morgana. In between we have had an inordinate number of magical women seductresses, trolls posing as wives, fae posing as wives, lamia posing as damsels, Freya the cat monster posing as a love interest, the maid Sifa as a spy. Even princess Mithian came back to be a damsel who is forced to betray Arthur. The last epic episodes? Had a woman whose name I never even bothered to remember because the minutes she started making eyes at Gwaine I knew she was an evil spy – and lo, I was right. Gwen was the one female character who wasn’t evil or forced to betray Arthur and Merlin and turning her evil magically just made it a full set. Oh wait, Merlin’s mother wasn’t evil. There we go.

Throw in the death of Elyan as well and we’ve reduced the already lacking racial inclusion on the show as well. He didn’t get half the drama of Lancelot’s death and the rest of the knights made it through.

There were, of course no GBLT characters this entire season – or for the entire show. Which is something I find doubly frustrating given the amount of uncritical slash fanpoodling there is of this highly erased programme.

With Merlin gone I’m left generally happy with how it went – it was a great series, with a lot of fun and some truly excellent characters. I loved this show over and over and it had some of the most epic episodes I’ve seen for a while. When I started to write this review I began to praise the writers for recognising when a series had reached its end and not stretching it out when it had no more to give – many a series has gasped along when it should have been put out of its misery long ago. But this? I’m not so sure, I think there was more there to give, a lot of potential unrealised and I really wanted to see Merlin and Arthur working to preserve and enhance Camelot after he knew of Merlin’s magic.