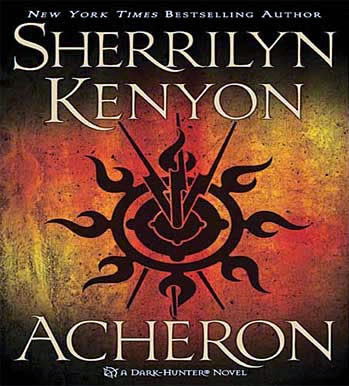 After seeing many Dark Hunter’s stories, we finally get to see the history behind Acheron, their leader, the oldest of them and a man who we’ve slowly seen reveal more and more of his secrets and his true identity.

From his birth 11,000 years ago, we see the abuse he endured and how that left scars on him – until the present day when he meets Tory, an archaeologist who has unearthed the site of Atlantis, including artefacts that could expose his true history to the world.

The information Tory has found cannot be made public – but it’s in high demand, Acheron’s enemies, Artemis’s enemies, even Apollo’s enemies all have a stake in finding the information she possesses and they – and Artemis – will do whatever they can to get their hands on it.

Before I start on this book, I think I need to refer to the series they’re from and the books I’ve read to reach this point. This is now the 15th book I’ve read in the Dark Hunter’s world (which contains 4 inter-twined series) and all of these books were, on some level a romance. No, that’s wrong – these books were the romance. I say “the” because the same formula was repeated every single time:

We start with a man with a terrible tortured past. Often they’ve been tortured to death, scarred, mutilated, betrayed by cruel and evil parents or loved ones, ran over by the waaaahbulance, or otherwise deeply hurting on an epic scale. In comes a woman who may hesitate because, of course, the deeply wounded man is nasty and mean because he’s hurting! But she will persevere, enduring his spite and comforting his pain and, after a long arduous process of, maybe, 3 days her love, compassion, and magical healing vagina will have cured him of his issues and centuries (if not millennia) or pain and turned him into a new man.

As you can probably guess, I’m not a fan – and not just because we’ve seen the same story repeated 15 times in a row. I don’t like tragic pasts being used as rough drama, I don’t like severe trauma being cured with a good shag, I don’t like people falling madly in love when they barely even know each other’s names, I hate the idea that if someone rejects you you just need to be persistent and I hate the idea that if you put up with bad behaviour long enough eventually it will turn to love. All of these are romance tropes that I really don’t like – both for being repetitive and because they feel the very opposite of romantic – and certainly the opposite of a healthy relationship.

I continue to follow the series because in between this very formulaic romance, there is actually a fascinating world here, some really good epic stories about saving the world, fighting demons, daimons and more and the Greek gods doing what mythology tells us they always did – screwing things up for shits and giggles (other pantheons have prominent trickster deities. That would be rather redundant with the Olympians).

Now, all that said – to Acheron. Which, yes, does follow the same formulaic romance plot. But it does it over more than 800 pages. That’s a long book. That’s a very long book indeed. Especially since the first 400 or so pages of that are devoted entirely to Acheron’s oh-so-tortured past. And it’s a doozey, it’s like as the leader of the Dark Hunters Acheron needs to be the most tortured of them all. His rape, abuse, starvation, torture, mutilation, familial rejection, betrayal by his beloved, soul crushing angst and broken self-esteem are described in vast, vivid detail – pretty much the first 400 pages of the book are entirely dedicated to Acheron’s torturous past. 400 pages – that’s longer than most of the books we’ve read and it’s an awful long time to spend on setting up the tortured hurt for the standard hurt/comfort story. To be honest, it almost feels like 400 pages of torture porn.

Not only did this make the first 400 pages a difficult, gratuitous and unpleasant read, it made the inevitable “I’ve found true love after a week’s loose acquaintance overcame all my issues!” seem even more outrageous. He has faced torture and abuse all his young life and every love has hurt and betrayed him – Artemis continuing to do so for 11,000 years. But less than a week – a week! – in Tory’s company and he’s able to set that aside?

The plot, once we got past Acheron’s backstory, wasn’t too original either, though it had its moments. The human, female love interest (Tory) is threatened and the magical man (Acheron) has to protect and help her – this is a plot that has played out time and again in the Dark Hunter series. And she’s threatened because she is trying to excavate Atlantis which the Atlantean and Greek gods want to keep secret; again, there are unique elements, but we’ve done that plot already in Dream Hunter. We also have moments of seeing just how wonderful Acheron is with his building houses with Habitat for Humanity after Katrina and playing basketball with a disabled child (also, can we not use disabled people as a characterless cut out to show just how wonderful an able bodied person is to spend time with them?) which I just roll my eyes at with it being a) almost ridiculously twee, b) glaringly avoids the fact that, with his powers, Acheron can pretty much manifest houses and have that kid walking and c) every other book has had Acheron ridiculously overtasked and busy – yet he can take time out trying to save the world and killing monsters to play online games with sad children? It doesn’t fit.

And if we were going to go through this whole "look what a wonderful person Acheron is" you'd think we'd spend a second with his newly discovered daughter.

And, because we've spent so very much time on Acheron's past, Tory ends up feeling hollow. Yes, there's an impressive amount of characterisation in a relatively short period of time but compared to the epic 400 pages of doom & gloom, Tory felt like an after thought. Also, she threw a hammer at Acheron's head. He publicly embarrassed her so she felt it was fine to throw a hammer at his head while believing he was human. They make jokes about her attempted murder from that point, like it's some cute, endearing feature.

There are some good points. We had an expansion of a lot of plot points that had been referred to in the past – Appolymi destroying Atlantis, destroying the Atlantean pantheon and teaching Strykerious. Exactly why Satara hates Artemis so much. The dead princess Ryssa that prompted Apollo’s curse. The origin of the relationship between Artemis and Acheron (and why it’s so toxic). The relationship between Acheron and his brother (as well as how he ended up with a  mortal brother) and how that developed, the origin of the Dark Hunters and why Artemis made them.

All of the are fascinating additions to the world. They’re not completely new and we either knew or could have inferred it from the previous book, but it’s very nice to see them expanded upon and actually see the full meet behind the bones we previously knew. There were a lot of these gems – but they were gems in every respect, including the fact they had to be hacked out of a lot of worthless rock.

In terms of inclusion we finally have a lot of same-sex attraction. I don’t think it’s necessarily gay or bisexual men as Acheron has a super special power that makes everyone desire him. If they are gay or bi, it’s still a huge line up of men who want to rape and abuse Acheron – so the gay/bi male sex predator is just repeated ad museum and, unlike the opposite sex relationships, there’s no positive to even try to balance it.

We do have a lot of overt challenges of the ancient world’s sexism and how women’s roles were so restricted and women themselves so completely devolved. But we also have wall to wall crying of “bitches”, Artemis, Satara, Tory – just about every woman in this book is called a bitch at some point. More bemusingly, many of them are also called “sluts” at times that just don’t make sense for the context.

The books continue to lack any kind of meaningful racial diversity, with a very few bit characters of colour, none of them being present for more than 2 paragraphs (and if Takeshi is going to become a character, I’d like him to be more than a random Japanese swordmaster – though I do like the collection of him, Acheron, Savitar and Jaden – the “we could end the world if we wanted to” club).

What we do have is the Viking Greeks. An astonishing number of these Ancient Greeks, their royalty and their gods are tall, blond and blue eyed. It bemuses me to no end – what’s wrong with having Ancient Greeks who are olive skinned with black, curly hair, dark eyed and of average height?

All told, there were some great things in this book when it comes to revealing and expanding on so much that has been hinted about for so long – but that makes up maybe 100 pages in this book. The other 700+ were not fun or necessary to dredge through.

If reading this book along with the Dark Hunter Series then this book should be read after Dream Chaser
Posted by Sparky at 3:00 PM