Review: Upon The Midnight Clear, by Sherrilyn Kenyon. Book 2 of the Dreamhunters Series 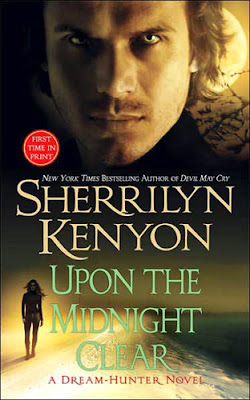 Aidan is a first rate actor, academy award winner and Hollywood A-list.  He has been betrayed by everyone he loved and cared about – leaving him with a very low view of humanity and a complete inability to trust people.
But his brother has decided to seek further revenge and summoned Dolor – the embodiment and deity of Pain who will be freed by human sacrifice – and by torturing and killing Aidan. Leta, the Oneroi a sleep goddess, has given herself the task to control Dolor, to prevent any more people falling to his cruelty. She never dreamed anyone would be inhuman enough to summon him, but he is free again.
Together, Leta and Aidan have to fight and defeat Dolor – and restore Aidan’s faith in humanity and his ability to love.
Ok so Aidan has been betrayed by most of his loved ones. His girlfriend left him and told lies about him to the tabloids, as did his best friend, brother and nephew. That’s got to hurt and be awful. He’s retreated to an isolated spot where he doesn’t have to see anyone, comforted by the $100,000,000 in his bank account but pestered by his agent who keeps ringing offering him multi-million dollar blockbuster movie deals. He hates all people, is going to die alone and trusts no-one and will drive them away with his rage!
Let us now call the waaahbulance for this man – but keep the siren off because he won’t be able to hear us playing sad songs on our teeny tiny violins for him.
Ok, perhaps unfair a little – and being betrayed by so many people you care about is harsh. But he’s still a very wealthy, talented actor with a great career – sulking in the mountains because all humans suck seems to be rather an extreme reaction. And it only looks worse because of the world it’s in. This is the Dark Hunters world. A world where we have followed:
Zarek, a man who was tortured and mutilated from childhood until death
Valerius, a man whose family brutalised and shunned him then spent the last 2,000 years being further shunned
Kyrian, a man betrayed by his wife that lead him to being brutally tortured to death
And, of course, the Oneroi, a race of dream gods cursed to feel nothing but pain because Zeus had a hissy fit. And let us not forget, Leta, the woman he is angsting to is not only an Oneroi, but also had her husband and child murdered by said hissy-fitting Zeus.
In short, this is a series where extreme – almost ridiculously so – tragic pasts are the norm for so many of the protagonists. And every single one of them dealt with their issues with more grace and endurance than Aidan. I am actually amazed that Leta, having endured what she has and living around so many people who have endured so much, didn’t just slap him and tell him to get over it already. It’s hard not to see Aidan as a petulant child. I was actually waiting for Acheron to show up and slap him about the head with the Reality Bat.
And whether Aidan’s angst was extreme or not, I didn’t need 35%+ of the book to dwell on his sulking. Which is another problem. This book is both very short and very padded – a combination I didn’t even think was possible. It’s 134 pages long and the majority of those are dedicated to the over-the-top emotional bawling of the people involved (varying between “oooo my poor tortured past! Snark!” to “oooh his poor tortured past! Woe!” to “oh his/her ultra hot body! RAWR!”) all of which was intensely repetitive (he doesn’t trust people because he was betrayed. We get it) and unnecessary. It would have been unnecessary and irritating in a book of twice its size, in a book this short it drowns what little pretence of plot there is.
Oh, and a note on that plot. Man and woman trapped in isolation while the woman teaches the wounded man to care again, all the while being hunted by an ultra- powerful.  Hmmm, I’m getting a strong sense of deja-vu here. Except that’s an insult to the old story because there’s so little here – and it boils down to melting Aidan’s heart, defeating the enemy with Twu Lub and Forgiveness (no, I kid you not) and Donnie, a human, managing to subdue Leta, a goddess so she could be rescued. Said goddess was earlier able to turn a blizzard on and off with a snap of her fingers.
Speaking of Twu Lub. Leta is willing to sacrifice her life, her eternal, immortal life, for Aidan. Aidan is willing to sacrifice himself for Leta (a very quick turn around after his “I hate everyone” attitude).
And how long did it take to establish this epic love that is written in the stars? 24 hours. I kid you not, 24 hours. 1 day. And they get married on the strength of that.
Also, while Sherrilyn Kenyon loves her happily ever afters – and, I have to say, I hate a book that ends miserably – this takes the cake. In fact, no, cake isn’t nearly sweet enough for this. The ending is more twee than a Disney Christmas Special. There’s happily ever after, and there’s rolling your eyes and feeling slightly nauseous from how saccharine it is
I suppose I should mention inclusion - there isn’t any. But there’s a very small cast. Leta also doesn’t show much empowerment, despite a short book and much angsting, she still manages to get rescued
All in all, the book is short – and this is the extent of my praise for it.