Review: Dead Until Dark by Charlaine Harris, book 1 of the Sookie Stackhouse Series 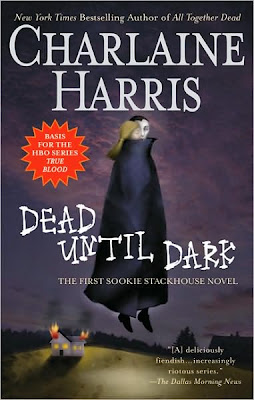 Sookie Stackhouse is a simple waitress, with a special ability. She’s a telepath, she can read minds. It’s an ability with few advantages and has managed to isolate her from much of the town leaving her generally with few friends and less relationships haunted by irritations.

But women are dying – women who are known to associate with vampires. The authorities are casting their eyes close to Bill Crompton – and then the murderer targets far too close to home, her own loved ones and at her herself. With her telepathy she is driven to try and find the killer to protect herself and Bill Crompton.

And, of course, there is the major cultural change of the vampires in the town.  The locals are hostile to encroaching vampires and the vampires themselves are split over whether to mainstream and fit in with the humans or not.

The first time I read the book, I didn’t guess who did it. Oh the clues were there but I didn’t follow them at all, didn’t come close to guessing who was actually responsible.  While Sookie tried to grasp exactly what was happening, you had a strong sense of the culture change with the revelation of vampires and how this small town can deal with such a massive change. I don’t actually think this was a story based on the actual investigation – though the need to investigate continues to pull her further into the world, perhaps out of her dept. This story is of Sookie’s life changing dramatically – growing from a very naïve and sheltered woman suddenly having to adapt to so many changes. Loss and mourning, her first real relationship as well as actual vampires, murders and someone hunting her. This is Sookie’s story as she tries to keep up with how much the world has changed.

And she does it well. She doesn’t leap in – she does have to back off, she does have to adapt, she does have to take a breath, take a break, just not be around this hectic world for a little while. She deals and learns and adapts – and even takes joy in the changes and revelations – but she also cries and worries and frets as she is taken so far outside of her comfort zone.

I get a very powerful sense of place form this book. You can feel the small town around Sookie, this place where everyone knows everyone else, the history, the family ties, the connections, the shared histories and experiences. From a thousand little gossips and a thousand mental notes from Sookie we can really feel this actual community. And not just community but culture – what people value, the fact everyone knows where everyone else goes to church, the fact everyone is interested in everyone else’s business and history, the rituals of politeness. You can feel a full culture and sense of reality behind this town that points to some very clever and evocative writing

Sookie getting involved in the plot is a trifle convoluted however. The idea that she can solve the crime with her lack of training and experience, that a vampire needs her to protect him is dubious to say the least and, perhaps, more than a little Spunky round the edges. Still, her telepathy doesn’t make it unreasonably so – being able to read minds makes for an excellent investigator

There is a huge amount of anti-sex tropes in this book. The murder victims are, predominantly women who are shamed relentlessly for being promiscuous (Adele Stackhouse being the only one that isn’t and she gets a saintly funeral to emphasise her much greater status) and there is a very strong sense of “they got what they deserved”. The survivor – Sookie – is, of course, not a promiscuous fang banger so she gets to live. Even Jason faces all his legal trouble to a background sense of he deserves it for his womanising ways. The vampires who are burned act badly but most of their crimes that are most shocking stem from their sex lives and public nudity.

Sookie is one of the most judgmental characters out there – from Denise Rattray showing her neck to Bill (the hussy. And yes, she uses the word “hussy”. My grandmother would call that word out of date), the subtle disapproval of Arlene’s many wives, actually going pale – blood draining from her face – because a vampire touched a woman’s breasts. There’s innocence and then there’s outright prudishness and then there’s out right horror about sex. Her description of most women is often laden with contempt, I think her Gran is the only woman who gets glowing praise.

I’m also unsure as to why we have Sookie’s abuse at the hands of her uncle Bartlet. It only came up briefly and then only really to emphasise how ruthless Bill was and then… it faded and wasn’t used again. It felt very casually used.

We have 3 gay men in the books – all of which are flamboyant and 2 of which wear make up and play the stereotype to the hilt. And one of them has AIDS – special vampire AIDS, but still AIDS – and ends up dead. So does Malcolm as well. And, at the risk of a spoiler, Lafayette isn’t exactly in for the long road here. We also have, sadly, the very tiredly used “coming out of the coffin” language.

There are very few POC in the books and in all cases their race has to be made a big thing. How the black Diane coming into Merlotte’s and kissing Bill causes a stir, Kevin worries about racial tension with his partner Kenya. On the one hand it’s nice to see racial tension and issues acknowledged given the location (washing over it would be less than ideal) but it’s not particularly challenged or turned around and at none of the POC are anything like major characters. And I’ll just cringe at the idea of the “Descendants of the Glorious Dead”

What we do have are some very good discussions about class – from Sookie’s growing up, to the contempt Andrew Bellefleur and others regard her profession, to the way different characters are treated and valued to Sookie’s money trouble – class is very much apparent. In a lot of Urban Fantasy the protagonists don’t have to go to work, or they work jobs with irregular, flexible hours that make their adventures so easy. They seem to have infinite resources, able to buy and fix things with no problem or worry. Worrying about their jobs, worrying about making ends meet – these don’t usually bother characters. Dead Until Dark does an extremely good job of constantly making us aware of how class affects people’s lives, of these real life considerations even when the woo-woo is happening.