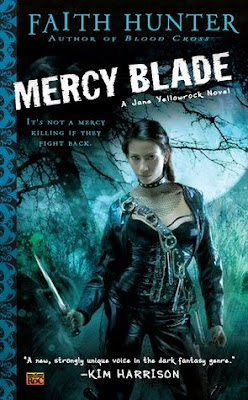 Jane Yellowrock is still serving Leo Pellissier, vampire leader of New Orleans – and she’s needed more than ever as a whole new revelation sweeps the world – werecreatures exist. Not only do they exist, but New Orleans is going to be ground zero of a whole new series of diplomatic meetings between the werecats of Africa and the Vampires – and these are 2 groups that don’t get on very well.

One thing that does untie them is their hatred of the werewolves – werewolves that are also coming back to New Orleans after Leo drove them out many years before. They want their territory back, they’re harbouring a grudge against the vampires and they’re willing to use any tool – violence or human law or human media – to get their territory back and drive Leo out.

Then here’s the vampires themselves s-living for centuries means vampires and blood servants can develop so many grudges and feuds between them. Someone’s definitely plotting among the vampire clans – and targeting Leo and Bruiser, his chief blood servant – in an elegant legal frame.

On top of that there’s Girrard DiMercy, the Mercy Blade who has come back to town – an old friend and servants of Leo’s and now a bitter enemy. He’s coming back and hanging around with powers Jane doesn’t understand and an agenda no-one knows and he’s not leaving.

And Katie chooses now, of all times, to rise from her crypt irrational and lost from her long healing from Skinwalker

Into this mix – one of the were-leopards dies and Jane’s boyfriend, Rick, disappears. Now to find who dunnit in this maze.

The plot, I have to admit, confused me at times. I got a bit lost not so much on who is who but on how everything was connected. We seemed to have several clues at once and I’m not entirely sure how we got onto each one. I don’t think it was poorly written, but I do think it’s a book that needs reading carefully or maybe reading twice to keep a track of the twists and turns. I’m not sure about some of the links and leaps Jane made, but that could be because I was flailing a little in the many threads.

Despite that – or perhaps, because of that – it was a good mystery. It’s complex but the clues – the many many many clues – are there. There’s a lot of information to piece together and some red herrings and distractions – but not many. All the information forms a part of the puzzle but the puzzle is so bemusing until all those pieces are together and you can see it as a whole. Again, it’s a book that would be worth a re-read just to see how the pieces are laid and fit the clues into the puzzle now I know what the full puzzle looks like.

We also had a huge amount of world building with the weres, with Gee, with the Curse of Artemis and more on vampire history and politics and how they worked. And all of it was integrated into the story without the clumsy info dumps or convoluted explanations we’ve come to know and loathe. Each of them adds a new dimension to the world and the story and kept me curious throughout.

I do hope we see more development with the weres because I feel we’ve only touched the surface and focused far more on the werewolves than the werecats. I also can’t wait to see more of the legal and political situation as vampires and weres continue to hold themselves outside of human laws, like a foreign country almost.

There were times when I was lost in this story, confused and re-reading but I was rarely bored. And, perhaps because she didn’t spend so much time in beast form this book, there wasn’t quite so much of the story told from Beast’s point of view. I don’t mind those scenes but when protracted it can be stilted.

Now, the parts I didn’t like so much was Jane angst. Now Jane has reasons to angst – especially with the new history she’s remembered. But despite remembering her history it doesn’t seem to add anything to her story or character beyond a reason for angst and some musings on vengeance – which seems like a casual way to use a rape storyline. Maybe more will come in the next book but at the moment it’s just there for no apparent reason except to be there.

Jane is also having some sex-guilt going on, at one point not carrying a cross because she doesn’t think she deserves it. Not because of the killing but because of the pre-marital sex. Now it’s probably a reasonable reaction coming from her upbringing in a Christian children’s home, but still I would like some counter-message, some strong rejection beyond Beast’s “mine”. She also has angst about setting out to kill people which I think is much more interesting and worthy of exploration – and I’d be interested in seeing where this goes and how she reconciles her two belief systems both with each other and her actions. Her jealousy, emotional angst and inaction with regards to Ricky were also irritating. She even picks it up herself later, which helps somewhat – just sitting back and being hurt rather than checking out Rick’s potential cheating was vexing to watch. Jane’s such a pro-active person, seeing her ignore it but have dark moods instead wasn’t what I like to see from her.

Inclusion-wise, Jane is Native American and is connecting more and more with her Cherokee roots and culture. While she doesn’t do as much exploration in this book as she has in her past books, it was still there and lacking major stereotypes. We do have a large collection of minor and semi-minor POC roles on all sides of the fence, good guys, bad guys and neutral and some acknowledgement that New Orleans is a racially diverse city. There are some dubious stereotypes attached to with Kenmebi’s relationship with Safia, however, in terms of power, control and ownership which were a good deal less than ideal.

Oh, and while it may seem reasonable to refer to a female werewolf as a were-bitch, it was rather overdone.

On the GBLT front we have a number of female vampires eyeing Jane for lunch which implies some level of attraction but it’s mixed with feeding as much as anything else. We do have Deon, the gay cook (who is gayer than. And I wish that wasn’t a quote). Who seems to be lobbying to be Jane’s GBF. He buys her underwear, sexy underwear (who else can you trust for advice on clothes?). He packs her bags. He’s a flamboyant flirt. On the whole I could do without him – and what I could certainly do without is people coming out as vampires, being outed as weres, coming out as skinwalkers – over and over we have a lot of appropriation of the language of the closet.

All in all, I liked this book a lot. It had a first rate mystery with plenty of information to follow and track down. It added a lot to the world and surprised me repeatedly just when I thought I knew where everything was. It’s also left plenty of threads to be developed to make sure I will be eager to sink my teeth into the next book