Review: Dances with the Devil, by Sherrilyn Kenyon. Book 3 of the Dark Hunter Series. 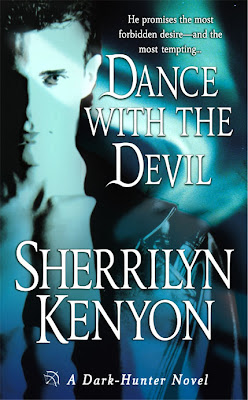 Zarek is a Dark hunter – who has been alone for 2,000 years. And as a human before that  he only wished he was alone rather than ciosntantly abused and tortured as a slave of cruel Roman masters. Living in Alaska for the last 600 years has been hard and lonely and only further hardened  him and made him crueller

Until, in the last book, he went to New Orleans and apparently screwed up. One time too many for Artemis who is tired of him as a liability (and she’s looking for an excuse) who dispatches Thanatos to have him annihilated once and for all. Except Acheron, the Dark Hunter leader, believes Zarek is redeemable, that there is still hope for him. Striking a deal with Artemis, Astrid, daughter of Themis and immortal judge who has never found a man innocent is sent to decide whether Zarek is guilty or innocent.

Unfortunately, when Atremis calls Thanatos back, he doesn’t want to heel. Instead he returns to his people, the daimons as their chosen one, the Day Slayer. And what does he want to slay? Why, the Dark Hunters of course. And being a nearly invincible killing machine, that’s somewhat of a problem
Even more of a problem is the fact that Acheron, who is most definitely an invincible killing machine, is currently stuck in Artemis’ temple and unable to return to Earth and swat Thanatos down like the petty annoyance he is.

I think the Dark Hunters are badly in need of some therapists. I get that they’ve had tragic pasts (all of them) but after 2,000 years? Time to move on guys. And yes, that “all of them” is relevant. Because of the way Artemis works (approaching people who have been horrendously betrayed to induct them into service in return for a last act of revenge) the Dark Hunters are almost guaranteed to have a horrendous, traumatic past. And, as I’ve mentioned before, the sheer prevalence of traumatic pasts in the genre – and the series – makes it really hard for me to appropriately engage their hurt and pain because it’s so over done.

I also think the beginning interactions between Zarek and Astrid didn’t feel very real. Yes, Zarek has had a terrible past, but his utter inability to even attempt anything resembling civil conduct is ridiculous to the point of caricature. He is found wounded and unconscious in the snow by Astrid who takes him in to help heal him – I can’t imagine that in 2,000 years Zarek hasn’t learned to be at least borderline stand-offish in this situation rather than outright rude.

Similarly, since Astrid is aware of the Dark Hunters, their pasts etc her shock and horror that Zarek had a terribad upbringing and her failure to recognise basic defence mechanisms. She’s supposed to have judged thousands and she can’t recognise this?

Oh, and yes, they did meet each other for 5 seconds  and lo there is throbbing engorged wetness and zomg this serial killer I’m judging is so hawwwwwt and this complete stranger I’ve met while desperately running for my life is so hawwwt. Oh the hawwwwt.

I also question the wisdom of judging a dangerous supernatural murdering criminal by putting them in isolation with a woman who apparently lacks any real defensive capabilities. She repeatedly expresses her fear of him.

Which is another trope that I hate – this idea that true love follows contempt. How it doesn’t matter how a man treats you, it just means he loves you really and his heart can be metled if you’re just patient (which has the dual fun of a) excuses any and all arseholery said man performs and b) keep pushing a love interest no matter how little interest they show)

Ok, now I’ve snarked I’m going to surprise you by saying “actually ti wasn’t that bad”. I know, I say this now after snarking my little head off? But, no, really. While I found the romance between Zarek and Astrid annoyingly fast forwarded with a few elements I found unrealistic, it was missing most of the horrendously destructive tropes we’ve found in paranormal romance.

All in all, the romance wasn’t annoying and Zarek’s personality is very real (except for the fact it’s been on hold for the last 2,000 years). I think Astrid could have done with more developing – the baby sister of the fates was an interesting character. A judge who had lost all faith in humanity and had never found a man innocent could have been compelling yet she managed not to be since it became all about Zarek and, of course, the engorged throbbing wetness.

I’m also interested to see a disabled character. Astrid is blind while in the real world as a judge (in theory to preserve her impartiality) and we’re often shown how she needs to negotiate the world as a blind woman and her own resistance to people helping and babying her when she is quite capable of doing things herself. Of course her disability is a temporary/situational force and she can also get round it using other people’s eyes and/or in dreams so it’s not an ideal representation. There’s also a problem of the few times when Zarek has to rescue her – such as when she knocks over a vase, it shatters and she ends up on the floor surrounded by broken glass she can’t see – she’s trapped until Zarek picks her up. It’s sad that they make such a big thing of her being independent and capable and not needing people’s help and then… she needs help to be rescued from a not-uncommon household accident

And the world is now getting even more interesting. With the gods and Acheron and demons and Atlanteans and Thanatos and Apollites and Demons and Nymphs – the world is huge and fascinating and growing. And we see new Dark Hunters who are fascinating and I want to know more about. And the whole Thanatos storyline? Is fascinating and brings more attention to the fact that the enemies – the Daimons – are not utter villains but extremely desperate people driven to unspeakable acts to prevent them dying a terrible death under Apollo’s curse. (Seriously, their whole threat would disappear if Apollo would take that back).

As is the case with several Paranormal Romances, I am saddened that the romance takes so much space here because the world is actually fascinating and the potential storylines here are amazing. There’s a lot to develop, a lot to see, the battles between the gods, the ongoing struggle for survival with the apollites, the constant need to cull the daimons, the various Dark Hunters dealing with their life as immortal, soulless beings. Acheron’s story- whatever or whoever Acheron actually is. It’s all fascinating. But instead of using all this we get Man and Woman meeting each other for engorged throbbing moistness with side orders of angst and moaning (both kinds of moaning). It seems a shame – because there’s a great story there and a great world there.

Oh and I do think that, at this rate, Artemis is going to have to do some severe recruiting since Twu Luv is robbing her of all her Dark Hunters. I would, again, say that these gods are acting very childish and petty and don’t feel like deities to me – but they are the Olympians and childish and petty is pretty much established in the original legends.

The cast remains straight and white as far as I can see  (and, if I can’t see the contrary, it gets no inclusion cookies) with this book being more erased than previous since we’re outside of New Orleans. At least the disability inclusion is damn rare.

This is a book that I had difficulty rating. I didn’t like it, but, to be fair, I have to say that that is largely due to my personal tastes. Excess angst doesn’t amuse me, a centre-stage romance isn’t a big hit to me and rapid “we saw each other than there was humping within 3 days zomg I want to live with him forever” romance makes me roll my eyes and turn on the sarcasm. However, I recognize all of these are not necessarily things that make a book bad so much as they are things that I, personally, don’t like. So, I’m going to give it a 3. I think, even putting aside my personal preferences, it wasn’t a stellar book, but if you enjoy these tropes that do not appeal to me, you will probably like it.