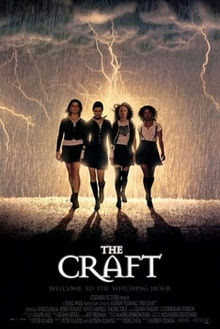 The Craft was released in 1996 and stars Fairuza Balk, Robin Tunney, Rachel True and Neve Campbell.  As with previous Reboot Wednesday posts, the goal of this piece is to interrogate the social justice fails in older movies.  At the time that movies like The Craft came out, the social justice blogosphere as we know it today did not exist and so consequently, these movies that have in some cases become cult classics have managed to avoid the criticism often aimed at current movies like Twilight.
When Sarah Bailey played by Robin Tunney arrives in a new town she makes friends with three girls who are social outcasts at their school.  Nancy is bullied after being slut shamed by the highschool jock, Bonnie for her disfigurement and Rochelle for being Black.  As they walk through the halls, they are called things like the bitches of Eastwick, a play on the 1987 movie, The Witches of Eastwick staring Cher, Susan Sarandon, Michelle Pfeiffer, Veronica Cartwright, and Jack Nicholson.  Shortly after arriving at the school, Sarah goes out on a date with Chris Hooker and he tells the entire school that not only did she sleep with him on the first date, but that she was a bad lay.  This of course sets of a solid round of slut shaming.
As Sarah, Nancy, Bonnie and Rochelle come together they discover that they have the ability to form a coven and perform magic. Bonnie wishes for the disappearance of her scars, Rochelle for revenge on Laurie Lizze played by Christine Taylor for her constant racial abuse, Sarah for Chris Hooker to like her and Nancy to an end of her White trash existence and having to watch as her mother is abused by her boyfriend. Over time each on of their wishes come to fruition but they are warned that whatever the put out into the world will return to them times three by Lirio, the woman who owns the local magic shop.
In no time at all, the power that they wield quickly runs out of control leaving two men dead.  Sensing that Nancy is out of control, Sarah attempts to bind her.  This of course does not go down well with Nancy and she attacks her.  The two end up in the huge battle of magic in which Sarah is the victor, leaving Nancy institutionalized.
Insanity as punishment for bad acts is ableist as hell.  The treatment of Nancy unfairly stigmatizes people who are neurologically atypical and setting this up as punishment suggests that disability is something that people can avoid if they simply perform in a specific manner.  We have seen this trope repeatedly with the suggestion that diet, exercise and fucking goji juice will create good health and woe betide the person who does not conform. When Rochelle and Bonnie visit Sarah in the aftermath of the magical war, it is this threat of ending up institutionalized like Nancy that Sarah aims at them.
Nancy is presented as a dark figure who just goes over the edge.  In brief snatches we get a glimpse of her life.  In comparison to her friends, she is poor and resides in a trailer.  Her home is not safe because she is defenseless to protect her mother from, her step dad's abuse. At school she is actively slut shamed.  In every sense of the word she is an outsider, yet it is the good Sarah that ends up the victor.  Nancy is very much a product of her environment but no sympathy is offered to her.
The other character that really caught my attention is Rochelle.  This young women constantly has racism hurled at her.  What she experiences is pure and unadulterated hatred. When she finally gets the courage to ask the ever so blonde Laura Lizzie what she has done to inspire such cruelty, Laura answers simply that she does not like Negros. Rochelle has every right to be angry and to want revenge.  This turn the other cheek nonsense that Whiteness has embraced underscores the idea that they should not be held accountable for their actions. When Laura begins to lose her hair and Rochelle comes across her in the shower, you can see that she feels guilty for cursing Laura.  Would Laura have had the same reaction had Rochelle started to lose her hair, or would she have ramped up her abuse? To me it read like the small punishment of Laura losing her hair, was somehow more terrible than the racism that Rochelle was forced to live with. This point is further underscored by the fact that Rochelle is the only person of colour to appear in the movie.
As far as isms go, I have certainly seen worse that The Craft, but that does not make it a good movie.  The premise was interesting but turning the three out of the four witches into dangerous threats for lashing out at their oppressors without going to good length to make it clear that how there were be treated was wrong is a problem as far as I am concerned.  Even though Neve Campbell was in this movie, I really thought that the acting could have been better and Fairuza Balk in particular was over the top.  This is not a movie that anyone really needs to see more than once.