Review of Rajmund by D.B Reynolds Book Three of Vampires in America Series 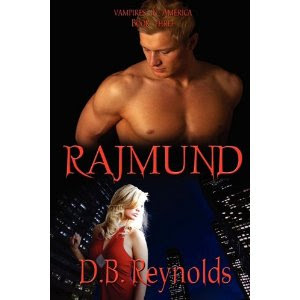 To be absolutely fair to D.B. Reynolds, I am going to say upfront that I am not a fan of paranormal romance.  In terms of the Vampires in America Series, we have reviewed, Raphael and Jabril.  In Rajmond, the protagonist changes from Cynthia to her friend Sarah.  I wish I could tell you that this improved the already disastrous series.

Sarah is haunted by her past.  As a young girl, when she began dreaming about women being abused and trying to help the police, her parents thought that she was crazy, and so they had her institutionalized. After reaching the age of 18, she created a new identity, and worked two jobs to get an education to put her past behind her.  When she finally achieves her dream and becomes a professor Cuny in Buffalo, the dreams return, turning her peaceful life into a nightmare.  Sensing that something is not quite right with her friend, Cyn invites Sarah to meet in her in Manhattan for a weekend of fun and shopping, after getting Raphael's permission, 'cause of course, grown women property cannot travel without supervision.

"I too have a place," he chided her gently. "With far more suitable accommodations than your father's.

where Sarah meets the vampire Rajmond, or Raj as he likes to be called. But it is not a simple matter for me or my mate to travel to another's territory." He drew a long breath, thinking about Cyn's request and how it might serve a purpose of his own. "One weekend, lubimaya, no more." (pg 17 -18)

Aww isn't Raphael sweet? Of course this controlling shit is justified, because he is a master vampire after all. I suppose we should be thankful, because without his permission, there would have been no way to create a situation in which Cyn, introduces her friend Sarah to Raj.

While the trip to New York, is social for Cyn, for Raphael it's business, and so he sends the little women away so that he can confer with Raj.  They come straight to the point, and Raj tells Raphael that his master, who just happens to reside in Buffalo (nope, not contrived its supposedly happenstance), no longer has the strength to take care of the vampires in his territory, and that he is considering challenging him for leadership. When their business is concluded, Raj and Sarah hit the dance floor, where she gets lost in the pheromones and begins fantasizing about sex right on the spot.  We learn later that Sarah is highly susceptible to vamp pheromones.  This fact alone should make Sarah question her ongoing attraction to Raj, given that he is patronizing from the moment that he meets her, referring to her as "little one" and is arrogant beyond belief, but that would have invested Sarah with agency, and we simply cannot have that unless she is setting herself up to be saved or planning a beautiful night time wedding.

Well, now we have a reason for Raj, who resides in New York, to show up in dead end Buffalo.  Of course there has to be more to the story to keep him around, and so, we are informed that several women have gone missing, the same women that Sarah has been dreaming about and that there just might be a vampire connection.

Though Sarah is a Ph.D, that does not stop the spunky agency from flowing freely. Even after her instant attraction to Raj, and the trouble it could potentially could have cost her, the weight of the missing women lays heavily on her shoulders and so she visits the local blood house after, Raj cuts her out of the investigation.  Predictably, she gets high off the pheromones and Raj has to come charging in on his white horse and save her.  In the morning, he expects her to be ashamed of her whorish behaviour though her actions were not because of her own agency but because of her known susceptibility. The point however remains, that she did after all throw herself at him, and several other male vampires. Sarah surprises him by gathering her things, and telling him that it's time to put up or shut up.  Apparently, unless he stakes his claim, he cannot control her.  Gee, what nice patriarchal bullshit. First off, the only thing that Sarah should have been ashamed about is her stupidity. How the hell did this woman get a PH.D, when she did not have the sense to stay out of a blood house?

But Raj is different than the so many of the vampires, because he has a woman as his second in command.

Only master vampires had the power to make and hold a child, and the most common reason for a master to make children was to defend his territory.  There was a strong cultural bias among all but the youngest vampires that put women in the to be protected category, while males were seen as defenders.  And there there was the need for blood - if a vampire had a female lover, even for a short time, he wanted her to remain human so he could continue to feed from her, All of which resulted in more male vampires than female, which in turn meant that Emelie definitely should have been noticed. (pg 177)

Right women are to be protected, unless of course they can be used for sex and a source of food.  That all just seems so wonderful doesn't it? Who wouldn't want to be a vampire's lover? I bet you are wondering what it is about Emelie that makes her worthy to get off the human blood bag sex slave plan.  Well, it seems that Emelie is a lesbian, who met Raj when he saved her from a brutal gang corrective rape. Though she is now strong enough to be his second in command, she could not have gotten to that point without Raj saving her first.  On top of all of that, Raj and Sarah have the predominate romance in this book with Emelie living solely to fight, die and obey Raj.  This is of course is natural because Raj is her sire, but it does leave her celibate having learned her lesson after coming on to the wrong woman.  Yeah for heterosexism.

As you can guess, Raj and Sarah do end up together.  This of course means, sex that involves ridiculous screaming, as they hurtle towards orgasm.  Though D.B. Reynolds did inform us that Raj has a large penis, at least ze did not go as far as other authors in this genre can claim that Raj's penis was to large for Sarah to wrap her hand around or that it was as thick as her arm.

Reynolds tried to make Sarah a sympathetic character, by using the misunderstanding of her psychic abilities; however, this of course suggests that what happened is wrong because Sarah is sane and not because people who neurologically atypical are wrongfully institutionalized daily because of an ableist society. This entire book read like what happened to Sarah was wrong because she isn't crazy. Yeah, thanks for that. I don't believe the romance that happened between Raj and Sarah simply because Sarah's susceptibility diminished her ability to actively consent to what occurred between them. Reynold did try to deflect that to paint Raj as a great respecter of affirmative consent, however  that is not enough to deal with the pheromone issue as far as I am concerned.

This book was marginally better than Jabril, but still far from a hit.  Reynolds has yet to write a story that isn't filled with ridiculous isms, or a romance that isn't contrived.