Review of Being Human UK Season One, Episode One: Pilot 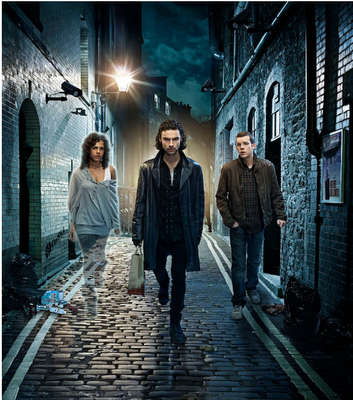 According to IMBD many of the roles and actors that appeared in the pilot episode of Being Human UK, were changed.

The episode opens with George changing into a werewolf and John Mitchell having sex and biting Lauren.  In the morning George is forced to steal women's clothing from a close line and call Mitchel to pick him up.  They return to the hospital where they both work and George discovers that his former girlfriend has been admitted.  As George who has the cutest bum, cleans up from his night of being a werewolf, Mitchell suggests to him that the real curse is leading a life filled with the shadows.  He claims that he wants to stop drinking blood and lead a more human existence.  Mitchell suggests that they get a place together and make a go of it.

When George goes to see his girlfriend Julia, she is stunned to find that he is alive and working as an attendant considering his IQ.  She tells him that his family mourned for him because they thought that he was dead. Julia then goes on to inform George that she has moved on and has a new boyfriend. George tries to tell her that it would never have worked out between the two of them and that he was just a pit stop on the way to a better life, but it is clear that Julia is not convinced and clearly wants closure.

When George and Mitchell do find a place, Mitchell is concerned because the rent is so cheap.  The real estate agent tells him that they have attempted to rent it several times but that people invariably felt uncomfortable there and moved on.  When she starts to press about them renting the place, Mitchell stalls saying that it depends on what George thinks because he is picky. Moments later, George bursts into the room, clearly excited about the apartment. He babbles about growing a garden in the back.  The real estate agent assumes that they are gay, saying that she is just like them because she likes cock.  So from this we are to understand that a man excited about laying down roots is gay.  Of course she let's us know that she has no problem with this after George denies that he is gay.  Seizing the moment to tease George Mitchell tells her that he is still closeted and has not told his family yet.  When they agree to rent the place the real estate agent leaves and a perplexed George asks why she thought they were gay, to which Mitchell tells him that it is unimportant because he is out of his league.
I understand that was meant to be comic relief but it is a tired trope that comes up far too often. On supernatural which involves two brothers, they are consistently assumed to be gay and it is meant to break up the darkness of the supernatural forces that they are dealing with.  Turning someone's identity into a joke is simply not right and in this case specifically referencing the closet, which we know to be harmful is indeed homophobic.

As they settle into their home, they discover that the house is haunted by Annie.  Annie is the ghost of the woman who died there.  For some reason she cannot cross over and Mitchell believes that she has a special attachment to the house.  Annie keeps busy reading, cleaning and making tea.  When George complains about the tea cups all over the kitchen, Mitchell tells him not to say a word in the hope that Annie will start cooking as a hobby.  That's some nice sexism for you.  Both George and Mitchell are hyper able bodied but not above hoping that the woman that has taken up residence in their home will fulfill the caretaker role.

Mitchell is clearly haunted by the people that he has killed in the past.  There also seems to be some kind of unrest going on in the vampire population. Herrick calls some kind of group meeting and talks about the time when vampires could walk openly amongst humans.  It seems that he wants a change in the status quo, but Mitchell is resistant saying that they lost this right do to their atrocious violence. I sense there is some kind of back story here that I hope will be expanded upon in future episodes.

On the night of the full moon, George descends into the basement of the hospital to deal with the forced changed.  Unfortunately, Julia follows him saying that she wants to know exactly what is going on with him.  George immediately panics because the door cannot be opened from this inside, and this means that unless he can find a way to get her out, Julia will be stuck in the room with him when he transforms into his wolf state.  When tries to get across the seriousness of the situation she dismisses him, claiming that it will give them more time to talk.  Finally, in a moment of desperation he calls the house hoping to find Mitchell but only Annie is home.  Since her death, Annie has not left the house and she is terrified to leave though George begs her to come ad let Julia out.  Just as his change begins, Annie shows up and drags Julia out of the room.  Annie tries desperately to keep Julia distracted but she looks through he window and sees George transform.

Later at the bar hanging out, it seems as though Mitchell, Annie and George have settled into a real friendship. Annie says that she doesn't mind if they eat in front of her though she does not have the ability to eat, and George takes it as his cue to put down his sandwich.  At this point I think I should say that through the episode we have seen Mitchell consume liquid in the form of both juice and wine. This makes me wonder what his limitations are as a vampire. He has said that he is not a fan of the sun and so I can assume that daylight is an issue, though he did get out of bed at one point when the sun had clearly not set.  He is also on a fast from blood, to the point of not consuming bagged blood at the hospital so is dependency on blood for nutrition is questionable as well.  I suppose in time we will find out what it means to be a vampire in the Being Human world.

Sitting in the bar with Annie and George, Mitchell hears a voice calling him.  He gets up to follow the sound and is approached by Lauren the woman he bit at the beginning of the episode.  Lauren is ecstatic that she has been changed and thanks him.  Lauren is also clearly excited about the new world order that Herrick has planned. Mitchell tries to convince her to remember what she once was and what her family still is but all Lauren sees is prey.  From this it is easy to surmise that Mitchell is going to be yet another vampire who is envious of humans and despises his nature.  I don't know about you but I am kind of done with the self loathing vampire but it seems that this is a trend that is here to stay.

In terms of POC in this episode the only one was Herrick.  It is clear that this is an expanding role but I do think that this pilot could have included more people of colour.  We also had an incident of haha I thought you were gay, which was clearly homophobic and compounded by the fact that everyone in that episode was straight.  Rather than resorting to tired tropes I think that erasure would have been a better option.

Having seen Being Human N.A. I recognized a few of the plot lines but I must say that I really like Being Human UK.  The characters seem to have good chemistry though Mitchell is a tad maudlin for my tastes.  As the series continues, it will be interesting to see how many similarities occur.