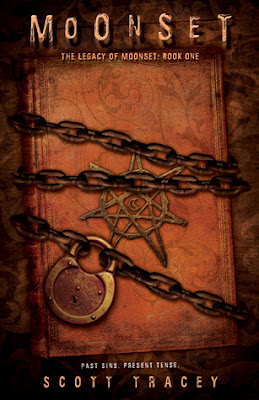 The Moonset were a coven that tried to change witch society. Through a series co terrorist attacks they took out most of their challengers, killed any witch or coven that could stand against them. They built a cult of followers.

But they didn’t win. Slowly but surely they were pushed back until, to everyone’s surprise, they surrendered and were executed. Leaving behind their 5 children – protected by a curse that prevented them from being harmed or separated, the witch government was left with the Moonset’s children to raise

Which is where we come in, following Justin, Malcolm, Jenna, Cole and Bailey, the children of the hated Moonset, moved from place to place and held by witch guardians who can barely hide their disdain for the troublesome teens. Until the latest move to a town where it all began – a town with a warlock lurking in the shadows, demanding the Moonset children.

Are the teens there as bait? Or as collateral damage and quiet removal?

Look at that synopsis and drool, folks. A secret magical society with some excellent world building on the nature and workings of magic, hints of far more to come. A coven gone to the dark side and executed, their children bonding together both through unknown magic and desperate self-preservation in a society that is determined to hold them responsible for their parents’ crimes. Their close bonds, their anger, their trust issues and their desire for acceptance all at war, overlaid with a dark plot to try and draw them into the same dark side their parents embraced. But then, a new thread to the mystery – maybe their parents were not so simple as was previously suggested…

Seriously, how could you not write an awesome story with this as its seed? It’s a wonderfully imaginative gift, there’s so much there, there’s essences of originality, compelling hooks for a whole story and so many wonderful things to explore. How could this book not be awesome?

No, really… how could you not write an excellent book with this?

That isn’t a rhetorical question. Because I’m at a loss how such a wonderful world, setting and idea could produce this rather dull book. It’s like seeing someone take a wonderful block of gold veined marble and making door stops with it.

Primarily, this is because of the writing. It’s very overwritten, very over descriptive and metaphors and similes have been crammed in like commuters in a London Tube at rush hour. And even less smoothly than that one. If you cut out the excess verbiage this book could have been half as long and much faster moving; we don’t need everything described in such vivid and exhaustive detail – it doesn’t set the scene, it distracts from it and focuses on irrelevant minutia. Like the travelling, we’re treated to several paragraphs of Justin wondering whether they’re in New York state – yes, you are, now move on! And not only do we have a lot of “tell” rather than “show” but sometimes the tell is used to try and overwhelm the show. Like Justin muses how he’s disturbed at how many of their days end with bandages and bleach (i.e. they get hurt a lot) and we see this by… it never happening again the whole book. Or happening again before this incident either. In fact, since before this they were just moved around while Jenna got them expelled, I fail to see why it was a major factor before.

Sometimes the writing even destroys the mood – like describing a Wraith in wonderfully creepy terms and then having him have a voice that hisses like a deflating tire. Really? Because I was with your cinder crackling, bone crunching, sibilant wraith, only now he’s deflating like some kind of spooky Michelin man. Less is more sometimes. Or there’s similes that are just so over the top that the scene is ruined by my mad cackling, example:

Cut the wraith down like it was the first born son, and this was a plague.


There’s no way the author wrote that line with a straight face.

The book is also hopelessly focused on one character – Justin. No-one else is explored with any great depth, no relationships are truly developed and explained or shown. Everything is from Justin’s viewpoint and most of that contains a lot of telling, a lot of monologuing and a lot of angst. It doesn’t help that’s he’s more than a little self-absorbed. He thinks of his siblings – but only in the shallowest ways and usually in terms of protecting them or, more often, preventing them getting in trouble. He doesn’t have any kind of friendship with them or even any kind of relationship – they’re burdens to control and irritations to endure.

It would help if they were developed more – if Malcolm was more than a guy who went to the gymn, Jenna more than a raging troublemaker (something which could be developed so well because she has so many reasons to be angry and resent authority), Bailey the sweet, well, Bailey is sweet, that’s about it. And Cole the… troublemaker mark 2 with extra angst? The relationship between the 5 siblings of the Moonset should be one of the defining elements of this book and it’s completely absent. It’s just Justin – the honest, true, hard working, worrying, long-suffering Justin who may occasionally crack but only when pushed beyond endurance; and his bickering , trouble making, emotional, problematic siblings who Justin is duty bound (and magic bound) to protect and help herd.

We get more characterisation from Ash, Justin’s possible love interest. Except her characterisation again exists only to develop Justin. He’s serious and soulful and brooding and she’s light and silly and random and snarky – oh, there’s a trope for that! Then we have the twist to the newish persona – which again serves to develop Justin in angst and betrayal. Ash, like every other character in this book, only matters and is only develops insofar as it advances Justin as a character or as far as it relates to Justin. This made it beyond difficult to be even remotely invested in their relationship – and that would be assuming I was interested in any relationship when we had so much else that could have been developed or advanced.

Which is a problem because very little is and what is advanced is done so generally through Justin’s endless internal monologues. The nature of magic, the history of the Moonset, the curse that binds the siblings together, their parentage – monologue monologue monologue. If he actually talked to someone for any length of time in an actual conversation rather than faux-not-really-witty back and forth with Ash and lots of arguments with his siblings, it would help.

And not a lot happens. There’s no character development, no development of these relationships, lots of exposition of Justin’s many many unhappy feelings but not acting on them and not a lot of progress for any kind of plot. There’s some action at the beginning, then they’re moved to a new town, they don’t trust their guardians and the Moonset symbol appears. Ash and Justin Flirts, someone babbles nonsense at them, more moonset symbols, people treat them like crap for being moonset, then there’s a shop that sells antiques and more people being mean to them for being Moonset. Even these events are really minor and brief moments in between… I don’t know. I can’t even say daily life because it’s not like we saw them spend any great time at school or or or…  honestly I can’t even remember what they did. I don’t actually think they did anything. I think Justin wakes up in a morning and has so many and such long monologues that you think he’s actually spent the whole day doing stuff when he’s really just sat on his bed muttering to himself. The story just kind of trudges along, dropping huge info-dumps then now and then we have WARLOCK DOES SOMETHING! PANIC! Then back to normal again and WARLOCK DOES SOMETHING! PANIC! Then back to normal until the very end when it all happens at once and we’re given a huge chunk of world building that I still don’t understand.

Speaking of things I don’t understand – the ending? Yes I get the whole “Moonset, RAWR!” and that there’s some factions in government who, while happy to use the kids as pawns and tools, draw the line at outright murdering teenagers because of their parents so are definitely looking for loop holes. But… boss man brings kids to town to lure out the warlock – with the consent and agreement of the government. Then warlock is drawn out, Moonset kids are accused of bad naughtiness, but he can’t push his accusation through because he’d also be guilty for bringing them there… Whut? I’ve read it through 3 times and I’m still bemused.

There are no minorities in this book and no real characters beyond Justin. We have the word “bitch” used a lot for the cookie-cutter characters, and a fair parcel of gay jokes. There’s some discussion of class, but only insofar as it impacts the witch world – not about poverty or privation, but the 2 tier society the witches have between covens and solitary witches.

In the end, it’s a great concept, but the execution is really lacking. Which is a real shame. Frankly, the only reason I kept reading this book is that synopsis was excellent and I kept waiting, hoping it would get better.

We received an ARC of this book from netgalley
Posted by Sparky at 3:00 PM