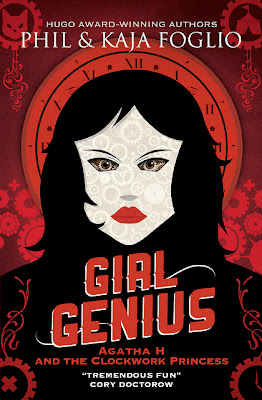 Agatha and Krosp have made their escape from the airship city and are now trying to work their way towards Mechanicsburg, the home of the Heterodynes. Except their airship crashes, leaving them stranded in the Wasteland, where the abominations from a thousand eccentric Sparks roam unchecked. It’s a daunting task to face alone
Luckily she doesn’t have to, after winning the trust of a travelling show full of truly excellent eccentrics and managing to duck the Baron and his minions. But it’s far from a simple trip to Machanicsburg
Because Agatha isn’t just the daughter of Bill Heterodyne, but also of the evil and devious Lucrezia Mongfish whose schemes were far further reaching and far more evil than anyone ever imagined. Worse, even though she’s long dead, she left plans for her daughter, plans for her return from the dead and the resumption of her dark dreams empire.
This is a difficult review to write. Whenever I sit down to write a review, I want to be original, I want to say something new and interesting about the book. But this book is a sequel to the already awesome Agatha and the Airship City and I’m in the difficult position of wanting to say “just like the first book.”  Which is a rather limited review.
But it’s also accurate. This book is still immensely fun. It’s immensely whacky. It has an excellent, wonderful world with all the immense weirdness that a full continent of eccentric, weird science can produce.  We have strange constructs, we have clanks in all their various forms, technology that strains the very limits of imagination and wonder. Everything that made the last book so amazingly fun, so weird, so wonderful and, ultimately, so very different from what I’ve seen before is present in this book as well
The one thing I will say is that this book has a slight shift in style, balance and theme from the first book. The first book was zany, fun, random and chaotic. It’s gloriously cheesy, immensely funny, frequently silly and with vast amounts of joy and fun as we’re introduced to this glorious world, grinning all the time. Yet, at the same time it had an underlying sense of vast forces hanging the balance with the potential for battles that could consume Europa coupled with some potential for heavy emotional moments.
And then we hit this book and those epic forces have stepped up. We have Lucrezia Mongfish and the Other with their terrible machinations that could bring down the empire and enslave the continent. We have Agatha very personal involved in this conflict, fighting desperately to stop Lucrezia, despite her very intimate connection with her. This is a battle where people are dying, it’s a battle where many more lives are at stake. There is loss and grief and real risk, not Othar-style silly, fun non-risk but actual dark, steely risk.
We also have some very compelling relationships – Agatha and Lars was fun and light, but with a heavy undertone and a powerful ending. Agatha and Zeetha form a very strong and powerful friendship. These relationships gave us a cast of characters to care about – not just a few main characters and lots of very fun background ones. This gave us people we could worry over, people who could be lost and be a grievous loss – and they were. Even Wolfgang’s fear and grief for Agatha are powerful, well conveyed and add to the changing focus of the book. Even the resounding tragedy of the Clockwork Princess herself was far darker than I imagined I’d see in this series.
There was a darker edge to this book, the dark emotion, the grief, the anger, the desperation , the potential for loss and the epic scale of the Other and its forces added an edge that wasn’t there in the first book. This book had more depth to it, meaning it was still a fun read, but it was less of a whacky read. It had substance and heavy flesh on the bones beyond humour, randomness and this amazingly impossibly wonderful world with all the machinations of the eccentric sparks, but in doing so it made the book less light, less fluffy. I won’t say it was a dramatic shift in content so much as emphasis – the rampaging clanks and monsters and cruel experiments are the same as in the first book – but while they were funny and silly then, seeing the direct aftermaths and being directly caught among them shows just how dark they can be (and how dark any Spark can easily become – as we see with Wolfgang almost turning on Ardsley).
I have to stress that it was still very very very very very fun. It had 3 Jagermonsters in it (needed more Jagermonsters – they’re truly awesome) and they’re always immensely fun.  We had the circus people with their wonderful minisparkiness – and sparkiness in areas that weren’t just traditional technology. Spark cooks and Spark alchemists and Spark tailors and fashion designers. All with their endlessly fun randomness. We’ve also got Agatha embracing her own Spark-ness. What’s wonderful to see is the confidence that comes with it – she still has many doubts about herself in many ways, but she fully embraces her skills and abilities as a Spark. She doesn’t succumb to doubt or uncertainty – she is Agatha Heterodyne, a powerful Spark and she is aware and confident in her abilities.

This book also had some footnotes. Oh the glorious footnotes about the world and history and just adding so much to the story. I haven’t see footnotes used this well since Terry Pratchett (and anything that can be compared favourably to Pratchett must be awesome to have reached that standard). And I love Krosp the talking cat. A talking cat general. What could be more awesome?
Inclusionwise we continue to have several POC at random points throughout the story, some in quite large roles (like Bangladesh Dupree who is awesome and terrifying and funny. And awesomely terrifying. I’m sure one shouldn’t be cheering a brutal, torturing mass murderer – and yet it’s so hard not to.)  There’s never any big thing about the inclusion and there’s neither stereotype nor great big fireworks to highlight the character either. And it has interesting little comments like a traveller calling Europa “savage and exotic” just as Europeans call his lands. Unfortunately, there are still no GBLT people.
I loved this book. I have to say I didn’t QUITE love it as much as the first. But that’s because I really really really REALLY loved the first book – it’s a very high bar to reach. I also think this book was extremely necessary. The first book needed some steel to turn it from a joyous one off to a great story that will remain compelling and engaging for a whole series. Like the first book, I heartily recommend everyone to get this book. It’s awesome.
Do I want to read book 3? I will joyfully sacrifice my hypothetical first born child for it.