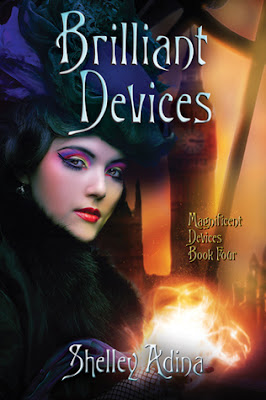 Lady Claire is back and rumours of her demise are greatly exaggerated; though he reappearance causes quite a shock for Lord and Lady Dunsmuirs, especially since this is the second time Claire has been presumed dead. Reunited with her flock, Claire can return to her original plan, visiting Edmonton with the Dunsmuirs, seeing their holdings and making plans for the future – especially since she no longer has the threat of forced marriage being held over her.

Of course, things can’t be that easy. Alice is joining them, severely out of place among the nobility and desperately looking for her father who may be involved in nefarious schemes. And when they arrive at the Dunsmuirs’ most remote mine they find a whole crew of people ready to join them, from Britain, from the colonies and even the famous Baron Zeplin himself. Of course, not all of these people can be gathered without nefarious schemes afoot – and soon sabotage follows kidnapping follows lots of adventure and excitement as Claire and her flock must again try to avert disaster – this time on an international scale.

I have a big grin on my face which is my Magnificent Devices grin – it’s impossible not to smile your way through this book. It’s such swashbucklingly, good fun. The tone has that wonderful lightness of humour and joy that keeps up in even the direst of situations. At the same time it wonderfully maintains the sense of time and place – the Victorian feel, the language, the class, the clothing, the attitudes are all extremely vivid, carefully maintained and, at times, gloriously lampooned.

The story didn’t let up for a moment and was full of twists and new developments. For a long time I had no idea what the focus was going to be or what the main plot line was – partly because all the characters have their own lives and their own agendas – but it didn’t matter because these characters and their interactions are so much fun and so truly excellent that it was worthy reading even without the main plot of the book being present.

And when it did develop it was wonderful – intricate with new revelations and surprises, I didn’t predict it, didn’t know where we were going and was surprised every step. The action kept flowing and the story kept up – it was an extremely quick and fun read.

I have to say I feel minorly cheated by the ending. Not because of a cliffhanger or anything like that – no the story was brought to a close and in a wonderfully concise and clear manner, the bad guys vanquished, the good guys triumphant – but it was summed up in a latter. The letter covered everything and we knew how it was going to end before that letter because Claire & Co had, through daring and intelligence and each of their useful skills, come up with a plan that was rapidly reaching its forgone conclusion. We didn’t need to see the bad guys humbled and defeated to know they were. We didn’t need to see the glorious victory  that had become inevitable.  We didn’t need to see Claire and the Dunsmirs and Zeplin proud and triumphant. But I wanted to – after a book of wrangling and struggling and ducking and weaving, I wanted the pay off of a glorious victories, the enemies shamed and cast down, smugness all round. This letter did not have my smugness pay off nor nearly enough villains having their noses pushed into the mud. I am disappointed.

One things I love about this book – and this series – is how capable all of the characters are. Claire, obviously, is truly excellent. She’s skilled, she’s fiercely intelligent, she’s determined, she has a mature and caring devotion to her flock, she has a strong sense of duty and doing what is right. She’s practical and recognises when things won’t go her way even when she is right, she has a strong sense of who she is and what she wants but recognises that what she wants doesn’t mean other people are to be forgotten or duties cast aside. But at the same time she is young and given to becoming confused and befuddled when inexperienced, awed by famous people and, at times, overwhelmed. She is not a weapon, though she carries one she can use and she is not capable of bringing down entire regiments with her awesome skills – and she’s still one of the strongest characters we’ve come across.

And so are the characters round her. The Mopsies are children who have honed some excellent scouting skills, keen memories and searching, inquiring minds. Jake is a capable navigator, still very much finding his way in the world as is Trigg with his engineering. Alice is, obviously, extremely competent though she worries she’s out of place with all these titled posh folk around her – but, despite the wishes of her friends which she feels the need to bend to, she remains focused on her personal goal. All of these characters are competent, confident and capable while not flawless and perfect – and they’re all allowed to be. The protagonist doesn’t have to swoop in to every situation and save the day. She can leave things to Jake or Trigg or the Mopsies. She doesn’t have to champion Lord Dunsmuir or Lady Dunsmuir when they’re confronted in social situations and she doesn’t feel the need to. Claire is very confident in other people’s abilities – even the children’s which shows a lot of growth on her part. She while she is both the protagonist and the heroine, that doesn’t mean she has to do everything herself or that others can’t be as capable

We don’t have any GBLT characters in this book, unfortunately. We do still have more POC in this book than we have in most Steampunks, but they’re still not given a huge role in many cases. Trigg is Black (and when someone dismisses him as a “blackamoor” he is vigorously defended and his personhood and extreme capability is strong reaffirmed) but he doesn’t have the same presence as, say, Jake or the Mopsies. We also have Malina – now I quite like Malina as a character insofar as she was a character, but even Claire said she reminded her of Alaia despite not looking like her. Which is no surprise because she’s the same character – Native American/First Nations woman who provides food and drink and gives them a mystical story. What is it with these women and the urge to tell random passing white women their lore and traditions? Are they constantly raided by anthropologists with big note books?

Then there’s Lady Dunsmuir who is several kinds of awesome turns out to be First Nations herself and I admit to being torn on this one. On the one hand I love the inclusion, love her as a character and love the reference to the First Nations AS nations and the concerns of exploitation. On the other, this is book 4 and this is brand new information to us.

We do have some ongoing commentary on gender as well – of course the whole women being just as capable as men which has been powerfully hit home since book 1. But there are other elements too – one I particularly liked was Alice complaining how men of long acquaintance only looked at her as love interest material when she put on a dress, jewels and make up; she’s still the same person in grease as she was in powder. Especially since it wasn’t a first meeting – it was a person of long acquaintance just noticing her.

There was some more pertinent addressing of class as well – Alice is extremely uncomfortable among nobility, she has no idea how to behave around or speak to people who have the very upper or upper class when she was born poor. I also rather liked a scene when an extremely wealthy woman complains rightly and very well about how much she hates the life her father is forcing her into, but she does it to Jake and Alice, 2 people who grew up extremely poor and neither of which have time or patience for this fabulously wealthy heiress’s pity party.

All in all – an excellent book, a wonderful book and a wonderful continuation of an immensely fun series with some brilliant characters and exciting, massively fun stories, I heartily recommend it.