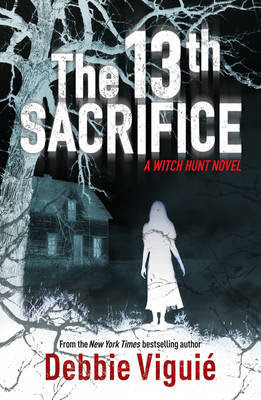 Samantha was a witch along with her mother, a dark witch in a powerful coven that practised the darkest of arts. Sacrifice and demons were not unknown in their pursuit of power – until she turned 12 and a horrific ritual went terribly wrong and the deeply traumatised Samantha was the only survivor.

She has a new life now. New parents, a new faith and a new job, as a cop no less. Her past is behind her. At least, she thought it was until a murdered young woman revealed a pattern of ritual murder victims. Dark witches were back in the area and, worse, they have ties to her old home, her old life and her old coven.

She is the only police officer who can possibly infiltrate and expose this new coven, the only person who can save countless possibly future lives – but doing so means facing the demons of her past and becoming everything she has fought so hard to avoid.

I liked this story a lot; it managed to draw me in very quickly and kept me hooked through the duration. We have some very compelling characters, a pretty original world and a plot that moves ideally.

I won’t say the plot is especially twisty; once we have an idea of what is going on after the first, say, third to half of the book, the rest is pretty guessable. I could see roughly what was happening and how the book would end once the reasons behind the murders had been unearthed – but that didn’t make the plot dull. I knew the end but getting there was still very interesting with its own revelations and explorations. I think if you’re going to write a book with an ending that is at least roughly known then it becomes important to keep the plot moving (otherwise you get the “get on with it!” sensation) and it’s important to put enough other elements in the book to keep it fascinating.

And this book succeeded on all counts. At no point did I feel the book was dragging things out; Samantha is very on target. Once the bodies are discovered she focuses on finding out how and why they died. Once that is discovered, she focuses on infiltrating and bringing down the coven. She doesn’t get sidetracked, she doesn’t twiddle her thumbs and she doesn’t curl up in a corner – she gets on with it and the book is always moving forwards

The book also had some really good twists along the way – the rage and hatred flaring up against witches turned out to be much more involved than I imagined. And we had Samantha herself confronting her buried demons of her past.

I did like the portrayal of Samantha’s trauma in this book. This is always shaky ground because Urban Fantasy is so full of dead or absent parents, horrific childhoods, abuse, torture etc  etc  etc – in fact, an Urban Fantasy protagonist with living parents and a happy childhood is really really rare; so I did look at another example with a lot of skepticism. But as far as this overused trope went, it was well done. The trauma fit the story and the character, it wasn’t an unnecessary addition just for the sake of it to provide quick and easy “development”. It was an integral part of what she was, the path she’d taken and the character she’d become.

I think this is one of the things this book does quite well is have some very real emotional reactions. Even if those emotional reactions aren’t what we’d want them to be or don’t make things neat and tidy and happy, like her traumatic past and like people not able to accept her or her power.

Among that real emotion the blip was Samantha and Anthony. There were elements I liked, his warring between his hatred and respect, her past battling with their mutual goals and his coming to respect her. But I think the overwhelming sexual tension that happened from the very first second and eclipsed so many of their scenes together was poorly explained and didn’t add anything to the story. We had a tense, undercover, exciting story about magic and death and mayhem – why throw in an abortive semi-romance clinging to the side?

This book falls down on diversity – POC are pretty much absent, as are GBLT people but she does use magic to cause desire in another straight woman to assert her power and dominance. Samantha is a very strong complex character – she has super powers but she is also rebuilding and re-establishing her life on her terms. Her strength doesn’t stem from her magic, or not just from her magic and her skill set isn’t limited to her magic. Her greatest moments of power are not defeating people with awesome spells, but confronting her past. When people don’t accept her it hurts her, but she doesn’t beg for forgiveness or acceptance nor does she apologise. She is vulnerable, but she isn’t weak. But she’s also the only female character who isn’t a victim or a villain. Flip that round, there’s her, Anthony (ally/love interest), Ed (police partner) and her boss who are actually characters and only Anthony and Ed have anything like an enduring part to play. Samnatha has little to no shame sexually but at the same time we have magic that relies on feeding on “purity” with an extremely rigid definition of what purity means – and, of course, that purity is aimed at women. How come human sacrifices involving male virgins rarely come up?

On the whole, it’s a nice beginning; decently paced, pretty good story with strong characters and an intriguing world setting. It’s a good book and I’m hooked into the series.