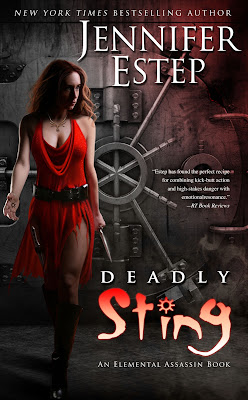 Dragged by Finn to an auction so they can paw through the remains of Mab’s estate, Gin is predicting a boring night (certainly more boring than dress shopping with added fun mugging).

A boring night that quickly becomes slightly nightmarish when she sees her sort-of-ex-Owen with another woman on what may be a date.

Thankfully relationship issues are rapidly overruled by a new threat – art thieves with guns, bombs and a willingness to shoot hostages.

The Spider just can’t have a night off.

In have to say, I wasn’t that thrilled with this story. I mean, the action was well done and well written as usual, I love these characters and the setting was intriguing. It had action, it had excitement, it had this wonderful world I love.

But it came down to being “Gin goes somewhere, bad guys try to rob it, Gin stops them.” I actually had trouble writing a summary that wasn’t just one sentence. I kept waiting for the whole museum robbery to end and us to move on to the main plot now the prologue has finished until I got to 75% in and I realised, wait, this is actually the whole story. There’s no real twists, no grand revelations, there’s a couple of side issues taking up a tiny amount of room, but that’s about it. It’s a linear, simple, action story.

I mean, it’s good at that. The fights scenes are excellent and there’s a wonderful bit of stylistic writing in that Gin often stops and watches her prey for a long time before actually acting. It can be really frustrating reading because you’re urging her to move and she isn’t – but she is the Spider, renowned for her patience and that was really brought home in this book; just how patient she is, how long she is willing to wait for the ideal situation. Except… someone was actually bleeding to death while she was being this patient. Great stylistically, a bit less so in terms of fitting the situation.

And I liked her flashback with Fletcher, giving another sense of who she was and how she became who she is – but also the ruthlessness that has been instilled into her. I liked it, it would have been great character development for… someone who wasn’t Gin. Sorry, but while I loved so much of it, the idea of Gin getting the job done no matter what, even if it meant using a loved one as bait, doesn’t quite gel with how she’s acted towards her extended family.

I’d also quite like her skill as an assassin be showed by her not getting hurt in a battle rather than her constantly being severely beaten before getting magical healing – less kamikaze Gin and more skilful, awesome Gin.

Having said that, I think it’s a real mistake to look at any of the Elemental Assassin’s series in terms of individual books – this is one of those series that works incredibly well as a collective whole. The pacing of the series, the way each book is presented as its place in the series and general development of the series are all extremely well done – looked at as a whole the writing and organisation is incredible, some of the best I’ve ever read.

So, while I look at this book and am a little put out by the narrow scope and the almost “monster of the week” feel of it, it also continues a pattern that this series has managed so well. In the early books, the plot served as a medium through which we could see Gin and her friends, get a sense of the character, a sense of the relationships and a sense of the issues involved. Then the big bad was introduced and we had several books with issues that touched on the big bad and helped make the big bad be seen as Very Big and Very Bad indeed as the story got closer and closer to it and Gin headed down the road to the epic climax that was only made more epic by the big lead up.

Then we moved into books post Big Bad and had a several books that, I think, consolidated the overall story. Gin acknowledging the emotion that comes from such an achievement. They deal with the fallout of that, with what it did to the underworld, reminded us that just because the Big Bad is gone doesn’t mean there aren’t plenty of other Big Bads out there. Then we explored, developed and resolved Gin’s relationship with Bria in a fully developed way that gave it and its issues the respect it deserved. We were introduced to  some more of the relationship drama with Owen (which I didn’t exactly care for – I thought it unnecessary conflict between them), developed some of Owen’s past and then, this book#

And all of this was so excellently necessary (well, I still didn’t like the love triangle) and done in a way that allowed all to be explored. With the Big Bad epic tale, the heavy emotional development issues and background explorations risked becoming distractions. Similarly, launching straight into a new Big Bad would have been convoluted and rushed. This allowed everything to be covered

There really is such an elegance to how this series is written, with excellent development and foreshadowing from the very beginning. To take one example, in the early books we had Gin’s relationship to show her attitudes towards love and relationships as well as the moral quandaries in what she did as an assassin. Intended or not, they served as excellent foreshadowing and foundation for both Owen and Bria, with us having being shown Gin’s issues when it comes to love, acceptance and ethics, it added a greater sense of reality and emotional impact to these later, more enduring relationships. To put it another way – Bria’s working through her moral outrage over Gin’s assassinations, and Owen’s unquestioning acceptance of what Gin does would not have had nearly the same impact if it weren’t for the pain these issues caused her with Caine.

Looking at the series as a series – this book is exactly what we needed. We have the action of the bad guy and the robbery to make the book flow but the book has also managed to address Owen and Gin’s relationship issues and sow the seeds of a new Big Bad – perhaps time for another epic arc.

But it isn’t just a series. It’s a book, a book I was looking forward to, a book I wanted to read and continued Gin’s adventures, a book that needs to be exciting and entertaining in its own right… and it wasn’t, not really.

Inclusionwise, while the other parts of Gin’s group were around the periphery, this was mainly Gin and Owen throughout, which means we have the same issues we’ve had with the whole series in terms of the POC being such secondary roles and zero GBLT characters again; even if we do have a variety of different and differently strong women.

As part of the series, it works – but only IF book 9 introduces something major and isn’t another “monster of the week” book. As a book on its own merits then no, it’s lacking, I’m afraid. It’s linear, it’s simple and the minute the book starts you pretty much know exactly how it ends and there’s not enough developed within to make it worthwhile. To be honest, I was left with a sense of “what’s the point?” If you want to do “random events in the life of Gin” that’s what novellas are for, or short stories or an anthology.

This was an ARC provided by Eidelweiss. It is due to be released on 26th March
Posted by Sparky at 12:00 PM