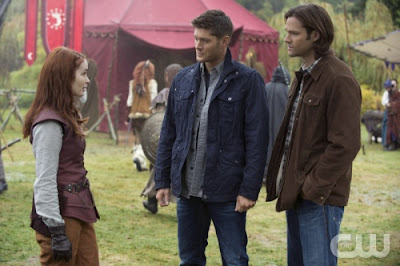 Supernatural is one of the longest running shows we follow; the Winchester brothers have been fighting against demons, vampires, werewolves, angry spirits, angels and anything else you can imagine for an incredible 9 years, 8 seasons (and a 9th season has already been planned) and a massive 168 episodes and counting.

That’s a long time and in that time we’ve had an amazing number of people hang around with the Winchesters. We’ve had monsters galore, victims in spades, people to protect and shelter, the occasional love interest, allies occasionally and, pretty rarely, the odd friend who has joined them in their struggle.

But such a lengthy presence on our screens makes it easy to see patterns of representation - and erasure. Any show that lasts this long and, because of that, has a great many characters is going to be more heavily criticised for it’s erasure than a shorter lived one. After all, a single season show with a small cast of 3 characters and less than a dozen extras is going to have less scope for inclusion or developing numerous minority characters - not that it makes the erasure tolerable by any stretch - but when you have 168 episodes and a gazillion people with which to present some decent diversity and you still fail? That’s almost willful.

Supernatural is not diverse on any real front - throughout its run the majority of the regularly recurring characters have, by far, been cis, straight, white men: Sam, Dean, Bobby, Castiel, Crowley - even Garth. We have a few women, but most of them are dead. Kevin has tried to shift some POC into the line-up by reading feverishly in a boat and Bobby was, briefly, disabled before he was magically cured when it became too awkward, but you can hardly say the show has made more than a token attempt at inclusion.When it comes to GBLT characters, the pickings have been slim; we have a very very few gay characters and no trans characters. The very first was a lesbian who appeared in Season 2, Episode 21 All Hell Breaks Loose, she was one of the demon children, along with Sam and she accidentally used her power to kill her girlfriend (behold, the dangers of gay sexuality!) After that, she is brutally murdered; the first to die to get her out of the way (no, that doesn’t count as a spoiler. It’s Supernatural and, frankly, a gay person dying is hardly a spoiler in fiction anyway).

Then we have Corbett. Never heard of him? Well he’s one of those annoying “Ghostfacers”, a group of amateur ghost hunters who keep getting in Sam and Dean’s way for much comedy (allegedly, anyway, can’t say they ever made me laugh). He only appears once - as an intern for the comic team in Season 3, Episode 13, Ghostfacers. While there he is, along with the rest of the team, comic relief. He also has a pretty blatant crush on uninterested straight guy, Ed. Alas, the Ghostfacer’s bungling gets Corbett killed and he becomes a ghost, a death echo. To save the day, they have Ed reach out to Corbett and use his feelings for Ed to have the ghost sacrifice himself to save them all.

Ok, we’re on dodgy ground already here - the only one of this incompetent band that actually gets killed is the gay one (ah, Westboro Baptist enemies again), we have an unrequited crush on a straight guy - and that crush being used to make the gay guy sacrifice himself for straight people. That’s pretty bad. But it gets worse - because this sacrifice isn’t moving or powerful or even remotely respectful - it’s FUNNY. They make Ed reaching out to the gay guy who had a crush on him a courageous act. “Go be gay for that poor dead intern.” I kid you not, actual quote. They even screw up their attempted obituary with poor attempts at humour.

Which is a problem, because then we get to the next gay characters - Damien and Barnes in Season 5, Episode 9, The Real Ghostbusters. Now these characters are comic relief throughout the whole episode - hilarious in their incompetence and constantly trying to act as horrendously awful copies of Sam and Dean. We learn that they’re a gay couple in the very last minutes of the episode - so Dean can be so uncomfortable for even more laughs. Since they were also dressed up as Dean and Sam for cosplay for the convention, it seems likely this was also another nod towards slash fans and Wincest shippers (which I’ll get back to). But at least they got to live. Which is something. I guess.

Even when there aren’t gay people on screen we have a constant slew of gay jokes - about Sam and Dean or from Crowley. Gay people and gay men specifically, are constantly used as the butt of jokes on Supernatural which compounds how problematic it is to make these few gay men comic relief.

The one character I cling to is Charlie, appearing in Season 7, Episode 20: The Girl with the Dungeons and Dragons Tattoo and Season 8, Episode 11, LARP and the Real Girl. She has managed to survive 2 episodes of Supernatural, she wasn’t played for comic relief, she wasn’t stereotyped and she was pretty damn awesome in her own right. Capable, clever, a leader, open and unashamed of her sexuality - and she got the girl though this, unfortunately, emphasised that Dean’s incredible discomfort around gay men disappears around lesbians. The one joke about her sexuality we had was her unwillingness/inability to flirt with a male security guard to manipulate him which is a wonderful subversion of the sexy female manipulator trope.

That’s it. One decent character appearing in 2 episodes, the latter of which was a non-meta fluff episode at that.

But what we have had are a lot of jokes. Jokes about Sam and Dean being like a couple or people mistaking them for a couple (also more Wincest fodder). Crowley loves to drop his jokes (I like the ones that poke fun at homophobia, but most of them are not challenges). And jokes about Dean being uncomfortable around gay men.

What makes Supernatural’s terrible record with GBLT portrayal even more galling is that there are few shows more adored by slash fandom - and even fewer that go to such efforts to pander to this fandom (and that includes Teen Wolf). The show delights in it “queerbaiting” while not bothering to include actual GBLT people in any extensive way. The show even went so far to openly acknowledged slash fandom in Season 4, Episode 18: The Monster at the End of the Book.
And dear gods do they play to it in conventions. Yes they do. Oh yes they do. Yes, they really do. Yes, a lot.

To me this awareness and blatant playing to slash fandom also casts a pall over what could be some wonderful moments of bonding and the genuine powerful relationship between the characters - especially Dean and Castiel. I have to ask myself whether a scene was written to show the closeness and strength of these characters, or is it written to throw more red meat to those fans and use it, yet again, as a stand in for any actual inclusion? A touching, powerful, moving scene can be ruined with the nagging question of whether this is just here for more fandom fodder so they don’t actually have to show people like me on screen.

It has worked for them. Despite a really shoddy record with GBLT characters you have innumerable fans considering this show to be a GBLT positive show and certainly more than willing to whitewash over the erasure - because fan fantasy is more important than actual GBLT inclusion. You can find articles on how pro-gay the show is and even on the “gay romance” of Supernatural. There are innumerable people convinced utterly that Crowley is canonically gay despite only having canon confirmation of him having sex with women and a whole lot of gay jokes. There are even people holding up Dean as bisexual because, when hit on, he responded with great discomfort and shuffling away rather than yelling “how very dare you, I’m straight.” Really, this is how little it takes to not only back up the fantasy but then insist that this is CANON and therefore the show is inclusive.

Of course, not only is it ridiculous to think that this actually counts as remotely sufficient to establish either of these characters as gay or bisexual - but if they WERE gay or bisexual and to only have these hints of it after so much time is equally offensive. We have seen Crowley refer to past lovers (female). We have seen Dean occupy a huge number of women’s beds and flirted with a huge number more. We have had an inordinate number of truly pointless filler episodes - the opportunity to establish either of these characters (or many more for that matter) as gay or bisexual has been there over and over again. To fall back on what would be, at best a deeply implied side-reference with lots of plausible deniability is incredibly insulting and dismissive of GBLT people and their portrayal.

To let fan fantasies and fetishes, pandered to with cynical baiting by the actors be a stand in for actual inclusion is not only offensive - but it’s deeply damaging. It relegates our inclusion to subtext, side references and occasional bit characters and running jokes. Something to keep hidden, something that would “derail” the plots in ways that the constant straight sexuality manages not to. Yet why would they do more when they can get all the praise for “inclusion” from fans because they made a double entendre on screen and the actors are willing to play in conventions? This would be dubious for any show - but for a show with so little in the way of GBLT inclusion, it is extremely insulting.

GBLT people deserve to be more than bit parts and implied fantasies, a subtext to hint at, a subculture to be titillated by. We deserve actual, real, developed characters and roles, not the throw away comic relief or rarely appearing bit character. We deserve our stories to be told - and we deserve to be more than a contrived fantasy and with over 168 episodes, it is ludicrous that we are so absent.
Posted by Sparky at 9:00 AM