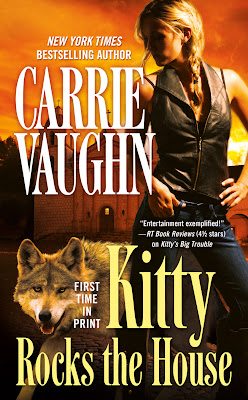 Kitty is settled in Denver for the first time in a long time, and there’s a lot of things she has to address. Not least of which is a challenge for leadership of her pack which she has been neglecting with her various battles against Roman. She has to re-build those bonds to see off the challenger.

And then a vampire in town comes looking for Rick – and they sequester themselves behind magical shields, leaving Kitty to soldier on managing Denver, her family, her pack and the fight against Roman alone.

I’m tempted to say this book is a filler – and in many ways it is. There’s little advancement of the meta plot despite a revelation at the end. There’s little coherent central plot to be advanced. There’s a series of random stuff happening, a lot of it isn’t resolved. We see Kitty with her family, we see a couple of her radio shows that aren’t really linked to anything, including a long, vaguely interesting debate between 2 academics and an equally long ramble about a crystal skull.

On that score I’d slap 2 fangs on this book, file it under “meh” and move on.

And I’m still tempted to do that – it wasn’t fascinating or immense fun. It was fun and vaguely amusing, but certainly not more than that.

But, when looked at in the context of the entire series, it makes a bit more sense. Kitty has been letting things slide in the last few books. Not her battle against Roman, but her more at home issues. Her pack, her family, the city of Denver – she hasn’t been around, In fact, in the last 2 books (putting aside the short stories) she hasn’t even been in the city – she’s been in London and San Francisco. She has let things slide and she’s supposed to be an alpha werewolf, she’s supposed to have a job and she’s supposed to have a family including a mother who is just recovering from cancer and a sister stressed out about the whole thing.

So we needed to see her sister angry at her – and no, it wasn’t resolved, but should it be? This isn’t an easy thing to fix so quickly and easily

And yes, she got a pack challenge and no it didn’t really go anywhere or wasn’t exciting but that’s part of the reason I like it. Kitty never became Alpha of the pack because she was strong or ruthless or dangerous. She never became a pack Alpha through physical might and both she and Ben admit that there are pack members who are far stronger than them. She became Pack Alpha because she cared, because she looked after her people and because they cared for her. She didn’t kill the last alpha in single combat, the pack, in support of her, ripped him apart. It was wonderful to see this continued, to see Kitty’s alpha position maintained not through strength of arms but through strength of support. This is doubly important in a genre where werewolves always seem to follow the same abusive, violent tropes.

But it also meant that this challenge had to happen. After all, Kitty became alpha because she cared about the pack as people – and after several books of not spending much time with them, there had to be some push back of her neglecting her role. I think this is also why we saw more of Cormac and Amelia as well as the police detective. Again, some recentring of her home base, her closest contacts and the regular characters in that area.

So in some ways it was interesting and necessary to see this focus on Denver, on Kitty firmly making Denver a home and, with her doubts, reaffirming Denver as her home and the centre of her fight against Roman.

Still, there wasn’t a lot of story there and it felt a little like a short story had been stretched or filled out to cover her re-centring of Denver. I think the storyline with Rick was especially unfulfilling and hollow. It was used to give us some more information about the Caesar above Roman, but it’s nothing more than words and some very convoluted ways to drop them without any real exploration or advancement. If you’re going to introduce something as dramatic as a Fallen Angel you’re going to have to make it actually dramatic – as it stands, the Ifrit they faced in a previous book was far more menacing

And the whole storyline needed some challenges. The death at the end happened because Kitty and Cormac refused to let Rick handle his own shit despite him repeatedly telling them he had this. At the same time, if Rick is an ally he should have been sharing information, actually holding up his duties and not holding everything so close to his chest so Kitty and Cormac were left with no other choice in order to get his attention and deal with what very much could have been a severe threat. They knew nothing about what was going on, his Family were panicking and Kitty was left to carry some important diplomacy while Rick was naval gazing and not bothering to keep them in the loop. There was no challenge of that, no challenge of how vulnerable he left them with no real attempt to fulfil the role he had committed to. He filled it in by trying to mention a more important role but only after the fact and with absolutely no details. At best, he’s a lousy ally. At worst, we’re looking at a retcon.

Beyond that, it’s just a little flat, the only attempts at inclusion are some minor Latino characters, there’s not much development, not many issues and not a whole lot of anything. It’s mildly amusing at best

On it’s own I would, as I said above, give it a 2. Fitting into the series I’m going to take it to a 2.5 as being what this series currently needs. But no houses were rocked in this book and it’s pretty disappointing