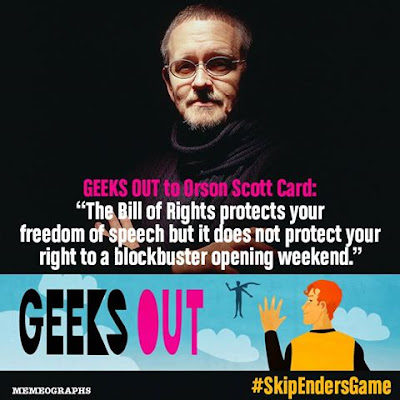 Orson Scott Card, as you probably know, is a nasty human being and one of the worst bigots you could ever hope to meet. He has also written a series of books that are pretty popular and many a person, including those who think of themselves as straight “allies” have twisted themselves into knots about that.
And now one of his books has been turned into a film, Ender’s Game. I’m kind of disgusted that Lionsgate would go near this man - so I fully support Geeks Out’s petition urging people to skip this film.
And cue a whole lot of people defending, dismissing, downplaying and otherwise squirming around Orson Scott Card’s bigotry so they can justify to themselves why they should see the film coupled with a fair bit of aggression aimed at GBLT people who are calling for a boycott. Let’s cut through some of this homophobic apologism

Orson Scott Card’s precious opinions
First of all, while this is what is most often reported, Orson Scott Card is not just a man who disagrees with marriage equality (though why gay people shouldn’t boycott someone who fights against any of our rights bemuses me); he became a director of the hate group, NOM. That goes beyond even speaking against our humanity or campaigning against our rights or putting his money into the fight against gay people – he became the director of a hate group.

And he is actually in favour of overthrowing any government that supports gay families. He vowed to act to bring down and destroy a government that does so.
But this is just part of Orson Scott Card’s bigotry – this is a man who opposed every and all rights for gay people. He actually supports sodomy laws, he wants being gay to be illegal. He wants to lock us up for existing – that’s a genocidal policy aimed at eliminating us. That sounds like a pretty good reason to shun him.
Orson Scott Card is so utterly steeped in homophobia that he actually re-wrote Hamlet’s father as a gay paedophile, turning people gay. He’s on record saying that it’s sexual abuse that makes people gay.
Stop downplaying the extent of this man’s hatred and how much time, effort and money he has put into bigotry. If you need to deflect the truth to salve your conscience then that should tell you something.
And if you're going to raise "freedom of speech", go read this and this and this and this and this and this and this so we don't have to repeat ourselves

Why Boycott – the money
While Lionsgate have tried to do their best to downplay how much Orson Scott Card is involved and Gavin Hood, Harrison Ford and Robert Orci have definitely done their very best to dismiss concerns (which makes me think I should be boycotting more than Card if these three men are so desperate to downplay and ignore homophobia). Despite this dismissal, Card has most certainly earned a big wadge of cash from them turning his book into a film – not only that, but he is listed as a co-producer of the film. If this film is successful, he will get more money.
When Gavin Hood, Harrison Ford and Robert Orci say Ender’s Game has nothing to do with Orson Scott Card, they are lying to cover the homophobia. They are putting money into the pockets of a rabid bigot who has a track record of using his money to fight against gay people’s rights. The audiences of this film will be putting money in Orson Scott Card’s pocket.
And not only this film. If this film is a success it’s quite likely that more of Orson Scott Card’s books will be turned into films, raising his profile and putting yet more money into his pocket.


Why Boycott – the message
Recently, Paula Deen was exposed as a colossal racist, most of her sponsors dropped her like rats fleeing a butter laden ship. For the sake of PR, if nothing else, they knew that being associated with such rancid racism was bad for their image (I’d like to think that some of them also found associating with a racist to be morally repugnant but I’m not that naïve), Food Network dropped her, even her publisher, Bellantine Books dropped her after being contracted to publish her latest cook book; even though pre-orders had pushed her book to the top of the Amazon sales chart.
Because you don’t get into bed with bigots. Lie down with dogs you get up with fleas. These companies knew that. Even if they didn’t give a damn about racism, they knew that they would be endorsing a bigot and would be smeared with her buttery bigotry. They wanted out because they knew the greasy stain would stick. The message was sent: you don’t work with bigots, bigotry is not acceptable, we want nothing to do with bigotry. No amount of butter makes bigotry palatable.

And this message is important. Bigotry is huge and it’s pervasive and one of the main ways we can fight its continued spread is by not accepting it, by adamantly denying it. By turning round to the people who spout slurs and encourage persecution and saying “no, that’s not ok. You’re out of line. You can’t treat people like that.” By refusing to buy the products of people and companies that support bigotry. By criticising when bigotry arises rather than looking the other way. It’s one of the prime reasons we started Fangs for the Fantasy - to criticise when it’s commonplace to close our eyes and look past the prejudice portrayed.

That outrage, that revulsion is the message; that idea that what this person has done is so unacceptable that we wouldn’t want to be near them, associated with them, let alone go into business with them.

Which is why Lionsgate’s pathetic excuses and little speeches about how much they love gay people is so completely hollow. Which is why Gavin Hood, Harrison Ford and Robert Orci’s excuses are so utterly empty. Orson Scott Card was a known bigot before Lionsgate decided to option Ender’s Game.  It wasn’t a secret. There is no way that Lionsgate could not have known what Orson Scott Card is. But they went ahead anyway.
Think of the message THAT is sending. It’s not even like they were working with someone who was revealed to be a bigot and then refused to drop him (though I would have boycotted for that as well). They knew what he was and decided to lie down with him anyway. They didn’t care about the fleas. Homophobia meant nothing to them. Homophobia was irrelevant. The rights Card fights against mean nothing to them. The lives of GBLT people Card tries to destroy means nothing to Lionsgate or the defenders they sent to try and cover this up. That is the message Lionsgate sends – homophobia is acceptable, it’s irrelevant, gay people being hurt means nothing, Card’s views are not toxic or deal breaking or something they’re ashamed to be associated with. They’re happy to endorse Card.
Which is why I think, if anything, the boycott shouldn’t be just for Ender’s Game, it should be for anything Lionsgate produces. And I certainly will think twice before going near anything Gavin Hood, Harrison Ford or Robert Orci is involved in.
“Offsetting” straight ally guilt
This was a tactic I first saw proposed by Alyssa Rosenburg as a way for straight liberals to continue to falsely call themselves allies and sooth their precious conscience while still supporting homophobes; but Lionsgate has been quick to embrace with their “benefit premier”.
The idea is that you go support your precious homophobes, then give an equal amount of money to a GBLT organisation. Behold, you have offset your straight guilt!
These organisations work to promote the idea that homophobia is not ok. They work to fight homophobia. Your “offsetting” goes against the very core of what they do. You are actually doing the opposite of their goal – you are making homophobia ACCEPTABLE so long as you make a token gesture. You’re still promoting homophobia, you’ve actually given a step-by-step guide as to how homophobia is ok! You have decided to give homophobia an acceptable out; supporting bigotry is still ok so long as you make a nice policy speech afterwards.

It’s akin to saying it’s ok to hit me in the face so long as you’re willing to bandage my nose afterwards. And then expecting me to be grateful.
Ultimately, you’re paying the ticket price twice to salve your poor guilty self so you can still tell yourself you’re such a great ally despite the fact you quite literally put the lives and rights of gay people as less important than you getting to watch a film. That’s almost as bad as the Chick-fil-a folk who wept because they simply had to eat a chicken sandwich.
And this applies double if your ally-guilt is salved by running around telling everyone just how very very guilty you feel and listing all the wonderful ways you support your gay friends and how you’re totally dedicated to gay rights! But you HAVE to watch this film (and eat your chicken sandwich), you just have to!
It’s sad. If you’re not going to boycott this film – though I’d urge you to and I certainly am – at least have the guts to own that. Don’t tell me about your moral offsets. Don’t tell me about your wonderful pro-gay record. Don’t lie to yourself and us and say Orson Scott Card is not involved, don’t try to tell yourself that art is separate from the creator like it came into being in a cabbage patch and he totally won’t benefit from its success. Own it. Be responsible for your own choices. You are seeing a film because seeing that film is more important than refusing to support a bigoted homophobe.
That is your choice to make. But if you’re going to make it don’t lie to us and yourself.