Dancing with the Devil (Nikki and Michael #1) by Keri Arthur 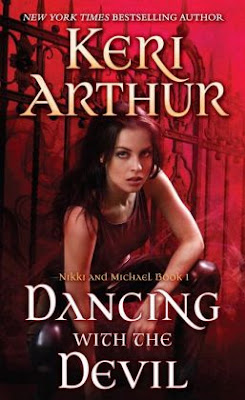 Nikki is a private investigator blessed – or cursed – with considerable psychic abilities that definitely give her a leg up in her job. Certainly it should be enough to keep track of a spoiled and indulged off-the-rails teenaged girls at the behest of her unpleasant, but far-to-doting father

But that teenaged girl is in far deeper than Nikki had ever imagined, thrall to a vampire, becoming a vampire herself, she tries to lure Nikki in to her master, Jasper’s clutches. Her powers will be an incredible asset to him

Especially since he is being hunted by Michael, ancient vampire, troubleshooter – and on a mission to protect Nikki from Jasper. And settle his old grudge with Jasper while he’s at it, if he can, after having hunted the other vampire for decades.

His priorities become skewed when he meets Nikki and starts to consider a relationship he thought impossible.

There was a lot about this book that it got right. We had a very consistent internal voice, we had a developed and fairly clearly defined world (though I find the masquerade of the world a little odd). The pacing is really good – it runs at a nice steady rate. We have a hunt that is well maintained – the characters make a constant effort to catch the big bad that never has dead moments nor does it get massively distracted – not even by the romance. In fact the romance also has a good balance between pained introspection and actually getting on with the story

It does start with a rather grandiose turn of phrase and a lot of convoluted rambling, but the book soon gets that out of its system and knives can just be knives rather than blades glowing with argent flame. Later there’s some shaky characterisation with both the big bad's persona (who is pretty much a comic book villain) as well as convoluted ways to make Nikki share her tortured past; Michael keeps telling her Jasper is attacking her through her bad memories but we've never actually seen him do that

The main problem I have with this book is that there’s nothing shiny about it. It follows a lot of the traits and tropes I’ve seen elsewhere. Nikki has dead parents and a tragic past with an ex that has left her with issues and inability to trust. Michael has a tragic past and issues and a duty that will take him away from Nikki. Neither of them think they can fall in love but lo, love happens despite only knowing each other for a week. We have a big bad who is very big and very bad who Michael has a personal grudge against and he must balance his need for revenge against his love for Nikki. Nikki is a private investigator with psychic magic powers. Michael is a vampire. I've seen it before so many times

It’s not that it’s bad – the story isn’t bad by any stretch of the imagination. It’s just that it reads like a basic urban fantasy/paranormal romance. There’s nothing unique here. It’s a template for so many urban fantasies and it just hasn’t coloured outside the lines at all. Many urban fantasies start with this – but then they embellish on top of it, they take the basic pattern and then add their own tweak, their own style, their own unique selling point to say why you should read them rather the gazillion and one other books on the market that are so similar to it.

I can only assume this is because the book is a re-release, while this is an ARC, the books were published before in 2000. Back then, it’s likely these books would be more unique and original – now they’re kind of lost in a sea of very similar stories.

There are also some tropes in this book I don’t care for at all, particularly related to the romance and the way Michael treats Nikki. Firstly, the romance is horrendously fast tracked; normally I wouldn't spend too many words on that because fast-forwarded “I just saw you and now I love you forever can’t live without you!” is a staple in the genre. But this goes above and beyond – Nikki and Michael are thinking about how luscious the other is on their very first meeting while neck deep in zombies. So fast tracked is it that Michael is already angsting about how their relationship is doomed to fail before they even have anything resembling a relationship (18% into the book!)

What I can’t gloss over is how “protective” Michael (and Jake for that matter) is of Nikki. They treat her like a delicate porcelain statue, something fragile and soft to be carefully guarded; I think it’s supposed to be loving, but it feels very patronising. Michael doesn’t seem to have a very high opinion of Nikki’s powers, while at the same time he fears what would happen if Jasper managed to take control of them. There's a really glaring contrast - the terror of Jasper with Nikki’s powers but the treating of Nikki as relatively helpless.

This protectiveness extends to constantly trying to get Nikki to stay safe, stay behind Michael, to stay home – even Michael controlling her mind to make her sleep so he can go hunting Jasper without her. This leads to one of the biggest conflicts in the book where Nikki is furious with Michael for controlling her mind (rightly so) – something she has extra issues with because her ex used to use mind control on her as well. This derailed hugely into Michael accusing her of having trust issues - even of being incapable of trust

This is after knowing him for… what? 2 weeks? At most? And he demands she trusts her and has an epic stomping hissy fit when she doesn’t? After, we have to note, he broke the one promise she asked of him – not to control her mind. And it’s not like having your mind controlled isn’t a damn good reason not to trust someone anyway.

What exacerbates all of this paternalism is the number of times Nikki gets into trouble and needs help. She gets kidnapped and abused by the big bad, she gets mind controlled or attacked repeatedly by the big bad, she walks into a building and nearly falls through the floor before being rescued, the book even opens with Michael saving Nikki from the big bad. Nikki is in constant peril and Michael is her knight in condescending armour.

With this I can almost understand Nikki’s spunkiness  - oh boy the spunkiness – because I’d want to run out and do things alone rather than have Michael hovering over me in case I should try to do my actual job. But it doesn’t make it any more annoying.

The cast isn’t huge, but it isn’t tiny either, certainly not when we throw in side characters, and it’s sorely lacking in any real inclusion. I think one of the random police was a POC - that’s it. Straight white people abound in this book

Dancing with the Devil is a very good and perfectly acceptable example of urban fantasy. But it’s too generic, lacking any real unique hooks which in turn means I don’t have anything to focus on to get me through the tropes that annoy me. But the writing is certainly competent, the imagination is there and while they were developed, there are hooks in this story that suggest while this book wasn’t very original, the potential for originality in the series is definitely there. I didn’t enjoy this book, but it’s possible I will the next one and, despite my lack of enjoyment, I’m intrigued by Keri Arthur as an author.

A copy of this book was provided through netgalley
Posted by Sparky at 3:00 PM