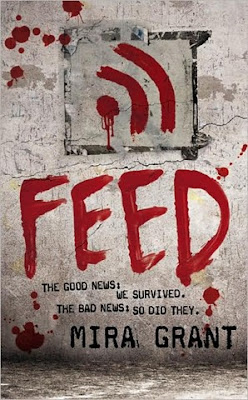 In 2014, the Rising happened. The dead came back to life and went on the rampage, biting or simply splattering the living to try to spread the infection. Millions died and the only reason more didn’t die was the Bloggers – while the news was telling the world that everything was ok, the Bloggers told the truth.

Decades have passed since that first Rising, decades in which society tried to put itself back together under knew, extreme security precautions, avoiding the zombie infested zones and living with the fact that anyone who dies will rise again – and attack and spread. In this paranoid world, the functions of government continue and it’s election time. And George (Georgia), her brother Shaun and he friend Buffy have been handed the biggest opportunity of their blogging careers – the chance to cover a presidential candidate for the full length of the campaign.

It’s a great victory for the legitimacy of blogging and a massive opportunity for George and Shaun to establish themselves as Alpha bloggers; but on the campaign trail they find something far more sinister than your average election time politics.

Because it’s a complicated world. It isn’t the standard zombie apocalypse with a few brave souls desperately trying to survive and occasionally losing it and trying to kill each other as has become something of a staple in the genre. This is a society that has survived and built up after the apocalypse. A society with people who have grown up not remembering anything but the zombie threat. A society that has to deal with the fact any human being could die and will rise as a zombie, who has to deal with the fact even a spec of infected bodily fluids could trigger your own zombiedom leading to a chain reaction that could massacre everyone around you and create an army of the undead – and not just zombies but any large mammal. A world where large sections of the country are abandoned or near abandoned because of the zombies, where there are threat zones designated based on how safe they are from zombies

The knock on effect from that is huge – beef disappears, large farm animals are too dangerous to keep around people since, if they die they become a threat. Wilderness becomes a no go area. And the endless quest for safety has led to ever more restrictions, gated communities where children can’t even go out and play and where an entire generation has grown up with a deep terror of crowds or the outside, their homes overlaid by security systems and constantly monitored for infection. The government has huge sweeping powers in the name of security – including a CDC with broad, lethal authorisation. People take constant blood tests to a paranoid degree to prove they are safe to be around.

All of this is put together with more unique elements – like the rise of blogging as a major source of media as the mainstream media tried to cover up the zombie outbreak rather than tell the truth – and entertainment for the shut in masses. It all comes together to be a deeply nuanced and multi-levelled world where hours must have gone into considering every contingency. Especially since this is also a book about politics so the political implications of everything have to be considered – laws about keeping large pets or annihilating all wildlife, the question of the death penalty, raising religiosity in the face of the near apocalypse; political issues that have been vastly skewed because of the zombie uprising.

I love this world. I love this world beyond measure. I love this world so much I want to say it’s perfect and wonderful and I have no complaints. But, objectively, I can’t say that. Objectively I have to admit that this book is absolutely bursting with info-dumps. I love them, I love what they reveal, I find them fascinating in the extreme – but they’re still info-dumps. They didn’t bother me, but in any other book they would have infuriated me. Similarly, the first half of the book is probably inexcusably slow – introducing this world while not achieving an awful lot. Senator Ryman’s policies – “the good guy” – are also awfully good; too good. The chances of a politician being universally reasonable on everything? It’s a bit of a stretch.

But I loved the world so didn’t mind. And after that the story definitely picks up – it races along through action, intrigue, betrayal, high emotion – and ends with a positive kick in the gut that leaves you staring at your tablet with a stunned expression and a dawning sense of horror that NO THIS IS NOT GOING TO BE FIXED?!?!
?!?

I also like the characters, particularly the two main characters, George and Shaun. The siblings are extremely well realised with their complicated upbringing at the hands of adopted parents who were constantly chasing ratings and used their kids for photo-ops. Neither of them particularly angst about their loveless upbringing, but they clearly show the effect of it; they’re shaped by it without being obsessed by it. And they carry their own obsession for ratings with their own blog – and I love that they remain focused on that. That is, after all, what they are here for, why they started following the campaign around, to further their own careers. Even when they agree with Senator Ryman they don’t derail their own aims and still push to get the content they need for those ratings. They don’t subsume their needs and goals and ambitions to his. They only start to derail from that goal when they undercover completely world shattering information.

I like how the characters interact with each other, both the beginning 3 characters, George, Shaun and Buffy and future characters who join them. They have a wonderful relationship, laid with a lot of snark and humour, a lot of love and a lot of irritation as you’d expect for siblings and good friends. They let other people join their group but don’t open up to them immediately, but eventually become firm friends. And it’s a book that has no romance with the main 2 characters (unless you count a sorta unrequired love from a long distance) – not that romance is a terrible thing in books, but it’s so rare to find a book that has decided to forgo it. I really liked the balance George had between being reasonably security conscious and aware as her culture demanded, while at the same time thinking people took it far too far. She could critique the paranoia of her world without sounding like an outsider.

In terms of diversity, the main characters are straight and white. There are a number of POC who are part of Ryman’s staff, including ones we see moderately prominent, and George’s second in command in the UK is of Indian descent. The problem is they are all distant and the ones closest to George with the biggest role do seem to be entirely White. And like 99% of dystopians, there are no GBLT characters. We do have several awesome female characters who each have their own strengths. Whether it’s the caring, compassionate but surprisingly fierce Mrs. Ryman, or the cold, snarky, professional, determined, focused George or the fluffy, fun, technical wizard, creative Buffy.

But we also have congresswoman Wagman. I get that they needed a third runner to be part of the race and one who was obviously not going to become the candidate. But an ex-stripper who gets votes by promising to take off her clothes and wear skimpy outfits to congress? A woman George refers to as “a publicity seeking prostitute who decided to pole dance on the Constitution for spare change” which pretty much sums up how she is treated throughout the book. It seems grossly unnecessary that the candidate would have this weakness to be constantly attacked. It’s not like it’s difficult to imagine a presidential candidate who is ridiculous without having to resort to an ex-stripper – I’ve watched the American primaries, it’s very very very easy to imagine someone ridiculous in the role

It’s a shame that the inclusion could use a boost, because otherwise this book is one I adored.

I loved the world and I loved the characters so adored this book. But I recognise those as subjective elements. If you are not hooked in by the world building, the detail, the carefully worked out implications and this amazingly created background, then this book will probably be very slow and very rambly. For me, I am happy to slowly ramble around this world because it is truly epic and when the story picks up it is exciting, tense and powerfully, amazingly emotional.