The Women of Defiance 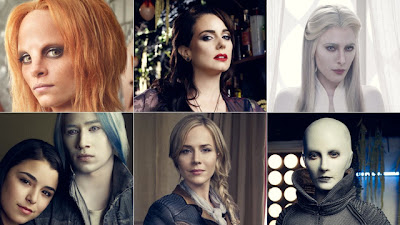 Sci-fi, regardless of the medium, has a long history of misogyny. Protagonists tend to be males on a heroic quest, with women reduced to the love interests (read: damsels to be saved) maternal figures, fridged corpses to inspire vengeance or, in a rare outing, the sidekick. This, of course, makes perfect sense given that sci-fi is largely written by men and men act as gatekeepers. Many women have found that the only path to success in this genre is to use their initials in publishing, thus masking their gender or outright adopting a male pseudonym. When we learned that Syfy was releasing Defiance, as an original program, we expected to see the same male headship that can be found on all of the science fiction shows that we currently watch. If anything, we expected even less because Defiance isn’t just science-fiction, it’s dystopian - and there’s nothing like the end of the world to drive us back to 1950s “values.”


At least in terms of gender Defiance turned out to be quite the surprise. Women make up a fairly large percentage of the cast and they are in powerful and varied roles. Defiance easily passes the Bechdel Test week after week and, in many ways, stands as evidence that strong empowered women in science fiction only enrich the story, not detract from it.


Perhaps one of the most compelling characters of the show is Stahma Tarr. At  first blanche she appears to be completely subservient to her larger than life husband Datak Tarr; and victimised by their misogynist culture. Stahma is a soft spoken, conventionally attractive woman, with traditional Castithan beliefs. Many of the humans who interact with her commonly underestimate her because they wrongly focus on her much more demonstrative husband Datak and view him as the threat. Yet, as we see, Stahma is the brains behind most of Datak’s plans and ambitions and it’s strongly implied this has always been the case; even Datak doesn’t realise that Stahma directs actions with deftly skillful manipulation and she is always 3 steps ahead - as Kenya found out to her cost.


Stahma is far from infallible - in some ways, Stahma is a bit of a fish out of water. For instance, before her son Alak’s marriage to the very human Christie she sought a prostitute to teach Alak how to give Christie an orgasm in fear that Christie would not give her father Rafe a good account of their wedding night; clearly what we have here is a huge cultural difference that she was not aware of but even in this situation though her assumption of what would be required of Alak was erroneous, she was plotting for the success of the marriage because she say the political advantages of a union between the Tarr and the McCawley. Stahma learns from her missteps and the next time Stahma faced a cultural difference, she quite astutely turned it to her advantage and pulled Christie closer to her. It’s this willingness to learn, ability change and unwillingness to be bound by Castithan custom unless they suit her (unlike Datak, who is far more rigidly attached to the old ways) makes her one of the most formidable figures in Defiance.


Another fascinating character is Kenya Rosewater. It is incredibly rare to see a sex worker as a main character on television - certainly not one so devoid of stereotypes. Kenya isn’t an exploited victim, she chooses her profession, she’s proud of her profession and her prowess. She is very protective of her establishment and the people who work for her. She is a skillful and capable business woman who doesn’t need help or rescue - she’s also pragmatic and not waiting for a man to whisk her away from all this. In fact, when she developed feelings for Nolan that affected her work, she stopped seeing him; her work came first. She is slut shamed by other residents but she adamantly refuses to accept that and fights back against it - even from her own sister, she refuses to be shamed.


In fact, merely having a publicly prominent sex worker be the sister of the mayor says so much about this setting and while Amanda has expressed reservations about Kenya’s profession, she’s also defended and is close to her.


I can’t say Amanda is our favourite character; she sometimes seems inconsistent and I disagree with many of the decisions she makes. She has her morality, sees rights and wrongs but at the same time she is heavily dedicated to keeping Defiance going which leads to her tolerating the intolerable. Despite this we cannot deny her strength; like Stahma and Kenya she isn’t perfect - she struggles a lot with insecurity especially in the beginning as the new mayor, but she is a skilled manager of Defiance, balances its factions and no character can see the larger political picture with Defiance, the world they live in and the various forces in the world as well as Amanda. Even if we don’t always like her decisions, we have to respect her strong leadership and no-one is as dedicated to Defiance as a whole; while many characters in the show are willing to destroy the greater good for their own profit, Amanda is firmly fixed on that greater good - but perhaps quite willing to trample individuals for the sake of it.


Defiance also has some incredibly complex strong characters, none more so than Yewll. We don’t see a lot of her, but her combination of guilt, her regret and quest for redemption, her selfessness even with her strong sense of self-preservation, coupled with her awesome acerbic tongue, brilliant brain and incredible iron will has made her one of our favourite characters; she effortlessly steals every scene she’s in. She’s one of those side characters you see and think that she could be an excellent protagonist in a spin off series.


Irisa also brings her own complexity. In some ways she is that most classic of a “strong female character” in that she is a very capable fighter, a weapon. But there is so much more to Irisa and she is cautious even when her anger makes her reckless. Most of her story is not about her fighting skills or her past victimisation so much as her finding herself - Irisa is pulled in several directions. Her father, Nolan has raised her as a human, but she is still and Irathient and exploring their culture and beliefs and her place within that while still maintaining her ties with Nolan who often does not understand. While pulled in two directions she doesn’t let either dictate to her - and despite all of this personal introspection, she is not insular, she does care deeply and passionately - Tommy, Sukar, Nolan - and is even willing to sacrifice herself for those she loves. I don’t think she cares about Defiance but some of the people who live there she’d die for.


Even passive, and hardly seen Christie, often seen as a prize more than a person, has shown a level of strength. Standing up to an intensely disapproving father and brother over Alak can be as simple teen defiance and summer love, but moving in with the Tarrs - aliens - and resisting Datak as well showed a quiet strength. In fact, even relatively minor roles - like Nicky the leader of the villainous plotting, Rynn seeking revenge for her family, Olfin Tennety, a high ranking Earth Republic ambassador (with 2 husbands - and she’s clearly alpha in that relationship) are all surprisingly strong characters.


Looking at these characters individually we can see their strengths, but it is collectively where we see the overall power of the portrayal - each of these women are strong, fully realised characters but they’re also entirely different from each other. They’re not clones, each trotting out the same tired stereotypes, they’re not reduced to evil sexiness (even when using sexuality as strength) nor are they little more than characterless weapons. These characters show not only strength, but diverse strength, different kinds of strength, different ways of being women. We cannot stress how important this is - that there isn’t just one portrayal and one path to strength.


Unfortunately, even in the shows and books that get marginalised issues the most right, there are still problems, and the same applies to Defiance; the portrayal of women on this show is good, but it’s not perfect and we need, however reluctantly, to criticise that falling short in the hope of reaching perfection.
Most obviously, only Christie is a POC (and she the least present of the characters, and least active); this diversity of portrayals of women focuses predominantly on White women, following Defiance’s habit of using aliens as representative of oppressed groups or the “other.” And while Stahma and Kenya have a relationship - the way it is handled leaves some doubt as to whether both or even either woman is actually bisexual or a lesbian (since Stahma was using Kenya to further her own political ends and Kenya was a paid sex worker and pitied Stahma who she saw as being in an abusive marriage).


The plotting between Stahma and Kenya brings us neatly to the other problem; lack of positive female interaction. All of these awesome female characters very rarely actually speak to each other and when they do it is rarely friendly. It’s not overtly hostile as we often see as far too many strong female characters in fiction hate all other women - but rather each party sees each other as tools in their own agendas.


The only real friendship between women is between Kenya and Amanda - and they’re siblings - and even that had to grow out of a lot of antagonism and hostility. Yewl fences with Nicky before killing her in of the best scenes of the season, Irisa barely speaks to any woman but Rynn - and that is hardly a friendly. Stahma and Kenya’s relationship is overshadowed by the whole plotting and poisoning and, similarly, Stahma’s interactions with Christie are all part of Stahma’s long term manipulations. It’s a shame that a series that has got so much right with their female characters has so little positive female interaction.


We have seen so many shows with only one or two women, with women taking to their bed, being kidnaped, being fridged, hiding behind the big strong men, doing laundry and looking after kids and rolling bandages while the men fight or, at best, being no more than a weapon themselves and so often being reduced to love interests or seen through the eyes of men, little more than extensions of male characters. Defiance is a truly surprising and amazing subversion of all these tropes and 1950s gender roles that are so standard in sci-fi and dystopians; it not only has one excellent female character - but so several excellent female characters each being awesome in her own way, with her own agenda and her own fully realised personality.
Posted by Sparky at 9:00 AM