The Dresden Files: Who Isn't A Sex Object? 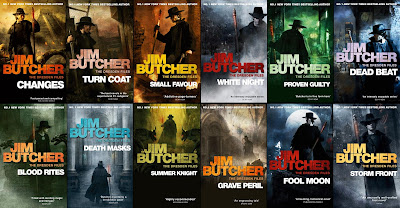 Every day as I go about my life, I’m surrounded by people. If I use the bus there are a gazillion people all crammed together (the one who desperately wants to talk to someone will be found sat next to me, inevitably); most of these I will not want to have sex with (except the hot bus driver. Because I am not dead). When I arrive in town and run to the nearest place selling me something resembling coffee, the chances are I won’t want to molest the queue of people standing between me and the hot beverages (axe murder now, that is highly likely).


I go into work and images of my colleagues in their underwear do not seductively gyrate through my mind (though that has been the topic of one or two truly horrendous nightmares). I deal with clients all day and rarely find myself distracted by endless sexy-time thoughts. An actual whole day can pass with only a few unwanted sex thought intrusions.


This is because I do not wear Dresden Goggles.


Because if Harry Dresden sees a woman, he will lust after her. This includes one of his best friend’s teenaged daughters who he talks about knowing as a child (which only gets more and more skeevy as Molly grows up and that crush grows and grows) this continues even after meeting Molly’s mother who doesn’t like him and is very very skilled with a hammer.


Murphy, the awesome police detective, his police contact since the very first book and co-warrior against all the darkness afflicting Chicago is described in ways that show how pretty she is and how attractive Harry finds her; we’re reminded of this fact every single book she appears in.


Luccio is the captain of the wardens, the wizard police/soldiers/enforces. And originally Harry didn’t lust after her - not being attracted to a woman of her age. Until she swaps bodies with the Corpsetaker (an enemy in a young woman’s body who, yes, Harry found attractive) and she’s on his radar.


Susan Rodriguez begins as a reporter and quickly gets involved with the Red Court of vampires in a series of complicated plots. Yes, Harry thinks she’s attractive and tells us so at length.


Then there’s Elaine - Harry’s fellow apprentice under Justin DuMorne and his first love - and yes, she hits the Dresden sexy radar which we are repeatedly reminded of.


Of course the White Court vampires are the very essence of beauty and lust being incubi and succubi, so Harry constantly lusts after them. And both the Summer and Winter fae are dripping in sexiness (and usually not very many clothes) so Titania, Mab, Lily, Maeve, Aurora, Leanansidhe, Sarissa, all have their beauty and sexiness described at length.


Even side characters - Red Court Vampires (both minor minions and leaders like Bianca), random female victims asking Harry for aid (including a huge number of beautiful women he cannot say no to - and no, it’s not chivalry, it’s refusing to think above the belt). This even includes the female Alphas from the werewolf pack (actually Andi started out being fat and not so attractive to Harry - but then exercise as a werewolf made her lustworthy for Harry by Summer Knight), female Denarians (fallen angels - demons, including noticing the curves of women with bladed snake hair!), and Gard the Valkyrie. Whenever a woman appears her beauty and sexiness will be commented on usually at length.


It’s like Harry goes through life giving every woman he sees marks out of 10 for attractiveness. It’s his first - and often only - thought when confronted by any woman. He even manages to think of Laciel’s attractiveness - and she’s a Fallen Angel who doesn’t have a body and is stuck in his head. In Cold Days he even commented on the sexiness of an 18 inch pixie.


About the only women Harry has not wanted to have sex with are monsters who resemble gargoyles or rotting corpses - but most the female supernaturals we come across are of the uber-sexy variety. There are very few other exceptions.


Now I know some people will point out that that Harry Dresden - and male protagonists in general - are hardly alone in having their tongue roll out of their mouths the minute a sexy member of the opposite sex (sadly, we can assume vast heterosexism in the majority of the books we read) appears. Indeed, it’s a recurring complaint from us that female protagonists can be distracted in the middle of being kidnapped, running away from a monster, or actually fighting vampires with an axe because the love interest’s six pack has come into view and turned her entire brain off with its rippling sexiness. The difference is that these protagonists will spend an interminable amount of time describing every pectoral curve and every last cm of their lover’s... assets but Harry (or anyone wearing the Dresden goggles) will turn that same gaze on any and ALL women. It’s not the love interest who is being buried under heaps of purple prose, it’s nearly every woman he comes in contact with, whether they’re his love interest or not - every woman exists to be a sex object. Almost literally, because in the city of Chicago there don’t appear to be any ugly or unattractive women. I can think of maybe 2 in the entire series. Women who are not sexually attractive to Harry just don’t appear in the books, they’re unworthy of mention or this Chicago is just full of supermodels.


Which brings related issue - while Harry rates the sexiness of every woman he comes across at great length, I listed those above for a reason. Those women: Molly, Murphy, Luccio, Susan and Elaine make up the most prominent non-antagonist female characters in the entire series. Any other woman is either a bit character or, at very least, an occasional enemy or rival. And they’re all love interests, all of them. Luccio, Susan and Elaine have all been Harry’s lovers. Murphy is his eternally unrequited love from book 1. Molly has a desperate crush on Harry. The most prominent women in the books are all sexually connected to Harry - it’s hard to escape the implication that for a woman to matter in the Dresden Files, she has to be romantically attached to Harry Dresden - not a friend or a colleague or an ally - she has to be in or on the cusp of a relationship with Harry. With that and every woman being overly described so excessively, there is a really clear ongoing theme of women existing at least in part as sex objects with even their importance to the story being based on how sexually close they are to Harry.


All of that becomes even further problematic with Cold Days and the assuming of the mantle of the Winter Knight. With this new power comes a constant desire to attack and oppress others and with women - especially attractive women (which in the Dresden world means all women) - that means he wants to rape them. It’s the ultimate misogynist attack and following on a series of all women being lust objects feels like a culmination of what has been building through the series. It’s hard not to see this as related that throughout the books Harry has to resist his sexual urges - which have now just been taken up to the next level.


Harry Dresden’s constant sexualising of women is scarcely the only problem in the series (his “chivalrous” treating women as delicate flowers and the sheer amount of times he’s rescued these women are major topics in themselves), nor is Harry Dresden the only man with the Dresden Goggles - in the Iron Druid Series, Atticus wears similar, though lesser, Dresden Goggles. He comments a lot on the attractiveness of women around him and having to think of baseball to distract himself when presented by beautiful women; again, there are very few women around him he doesn’t find attractive. In the Black Knight Chronicles, James wears his own pair, constantly judging women by their attractiveness and being surrounded only by beautiful women. In fact, it’s a really common problem with male protagonists - but Harry Dresden, by dint of the sheer size of the series if nothing else, and the extremity of his descriptions as well as his devolution towards rape fantasies takes a prize and goes above and beyond the others.


This constant sexualisation of women is a problem - especially when it is universal - it paints women, no matter what their role is, as sex objects. All women are judged on their sexual attractiveness, all women are presented as sexual targets and their value and worth as characters - as people - is reduced to how attractive they are. It’s pernicious in the series and in our media in general and have very real real world consequences.
Posted by Sparky at 9:00 AM