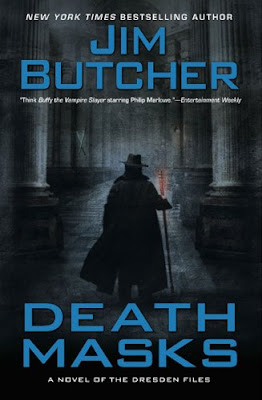 Why, I do believe we have arrived.

Harry Dresden is dealing with the ongoing fallout of the war between the Wizard's White Council and the Vampire's Red Court. A war he started and where he still very much stands at the eye of the storm. The Red Court noble, Ortega is in town with a proposition for Harry. A duel. A duel between Harry and Ortega to the death. If Harry wins Chicago is declared a neutral zone. If he refuses the duel? His friends will be targeted and killed. Faced with this non-choice, Harry is forced to accept the duel against a vampire centuries his senior. But life is never so simple for Harry. Susan is back in town, still dealing with the affects of being infected with Red Court vampirism she must struggle against her urges and her attraction to Harry as well as forward her own agenda and the agenda of the organisation to which she now belongs.

Worst of all, the Denarians are in town. Not just demons, but servants and vessles of the Fallen themselves. They're in town and they seek to acquire the stolen Shroud of Turin and use it in their nefarious plotting (and yes, I got to use the words “nefarious plotting” in a serious sentence. Yes this amuses me) opposed by Michael and his fellow Fists of God, the Knights of the Cross and yet further complicated by John Marcone, crime boss also being involved.

Never simple, but most certainly epic.

I would say this is the book where everything this series has been promising to be has finally got into action. Every book until now seems to have been an introduction paving the way to this book, though Summer Knight was epic in its own right.

There's a lot of world development going on here. We learn a lot more about the war and the Red Court's motivations as well as Susan's activities and the new group she is affiliated with. There's a lot more world building with the Knights of the Cross and the Denarians. There's also a lot of character development, Susan gets developed and filled in a great deal. We learn more about Michael and his fellow knights. Even Marcone gains a new level of depth and character building that I appreciate.

I have to say I liked the development of the knights – especially since it de-emphasised the rather rigid Christianity that Michael espouses. I was prepared to be leery of the knights but Sanya is an atheist and Shiro seems more philosophical than religious – glad to see goodness emphasised over creed especially since Michael has been a bit of a judgement arsehat in previous books

The plot is very well paced, fast, with a lot happening without it ever becoming too confusing – it's complex and confusing to a degree but it is done so in a way that is intended (because we're dealing with complex and involved plots) rather than flailing, failing writing. It is tense, action filled, character driven and there was never a time when I wasn't happy to be reading. The action was also well done – a lot of action scenes in books often give me the impression of people queueing up waiting their turn to act – or people get lost or just you can't picture what happens. I would say Jim Butcher writes some very good action he does – exciting, easy to follow with just the right amount of description to create a vivid image without being lost and wordy.

Plot wise, the only minor criticism I have is that there are perhaps a little too much going on. With the duel and the Shroud and Marcone and the Denarians. In some ways this is a good thing because it shows just how overwhelmed Harry was, but I often felt things were lost. Again, like in Summer Knight, I felt that the war with the Red Court pushed the pause button while another more dramatic element (the Denarians) were dealt with and it was hard to focus on the epic power and consequences of the duel because of the other epic going on around it.

On a personal taste note, I'm glad Susan has returned to South America. I find the constant tension between her and Harry and the angst tinged nature of their relationship slightly tiresome. It's not awful, certainly not by urban fantasy standards, but I could do without it. Less Susan, more Murphy (who didn't play nearly a big enough part in this book) though I did like how Susan's story has developed and again how much she is a power in her own right.

Ok, to the problematic elements

We have complete GBLT erasure again, no surprises. Sanya is black and Shiro is Japanese, Susan is, of course, Hispanic. So we have some creeping racial diversity, but I have to give a disapproving “himm” to the idea that POC = foreign that's creeping in. In Summer Knight we had the White Council showing the diversity of race – but it was seen as diversity of nations. And here, Sanya is Russian, Shiro Japanese and even Susan is now living in South America. POC come from “over there” it seems, rather than being native to Chicago. I also wasn't happy about Shiro's dialogue occasionally lapsing into Mr. Miagi-esque structure.

And Harry and women. Oh this has to end. His “chivalry” just gets worse and worse. Really, I think if a woman asked him to hit himself over the head with a hammer he'd instantly go to the nearest DIY store. The number of times in this book where one of the Shroud's thieves – a woman – is given the benefit of the doubt, saved by Harry, allowed to get away by Harry and allowed to clock him round the head is ridiculously boggling. And despite obvious kick-arse abilities, he's still rather over-protective of Susan and Murphy. Sure there's consequences to him constantly treating women like delicate little flowers, but it's past tiresome now. Also, honestly is it really necessary to 'notice' a woman's curves every single time? Even when it's a life and death situation? Even when she's possessed by a demon and has bladed snake hair? Really?