Review of "Bitten" by Kelley Armstrong 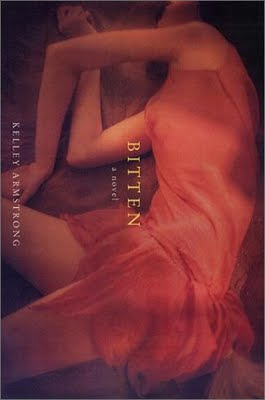 Kelly Armstrong has been on my to read list for quite sometime.  I really like the idea of rotating protagonists and hope that it will make the Otherworld series feel bright and fresh with each new book I read.  The first book in the series focuses on Elena, the only living female werewolf, and her struggle to hold onto her humanity, while being drawn into the pack, or even more specifically, drawn towards the love that Clay has to offer.  While there is a good deal of romance in the story, it would be wrong to say that the book is completely about Elena's relationship with Clay.  For the record though, I do feel I should say that I am tired of seeing the name Elena in urban fantasy books.  Come on, you have the imagination to create a book about werewolves, but not enough to come with a name that has not been overused.

Before we get further into the review of Bitten, I would be remiss if I didn't point out that once again we have another straight, all White world.   It is ridiculous when we consider that Elena lived in Toronto before moving to Stonehaven, which is one of the most multi-cultural cities in Canada, as well as one of the largest GLBT populations.  I guess there is nothing like erasure to really give the reader a sense of the setting.

Elena is called back to the pack after mutts (werewolves with no pack identification) encroach on pack land.  Before leaving Stonehaven for Toronto, to escape Clay (the werewolf who lied to her and turned her), Elena's job had been to keep track of the wereabouts of mutts.  She is very reluctant to return when Jeremy the pack leader calls, because she has developed a long term relationship with a human male named Philip, as well secured a job.  To go to Stonehaven she must confront her past with Clay, as well as answer the call of her werewolf nature.

As protagonists go, I don't find Elena to be filled with the usual spunky agency, or irritating angst that are common in this genre.  With the exception of having her run from Toronto to Niagara Falls N.Y., a distance of 130KM, and unilaterally taking on three male mutts to save her lover,  most of the choices that Armstrong had her make were beyond reasonable. She is however yet another female protagonist with dead parents.  Elena's parents died in a car crash when she was five.  From there she went from foster to home to foster home, where she was a victim of repeated sexual abuse.  I don't know what it is about urban fantasy, but it seems to be impossible to write a female protagonist without a largely dysfunctional childhood and or dead parents.

As Elena becomes closer to Clay, she must deal with the fact that he bit her without consent, causing her to turn into a werewolf.  I know that they had a romantic relationship before this extreme violation, but I have trouble with the idea that she would so easily fall back into bed with this man, who violated her body and lied to her.  Maybe it's because I am not a water under the bridge type person, or maybe it's because too often men who violate, stalk and actively oppress women in this genre are cast as the ideal mate.

The majority of the mutts threatening the pack see Elena as some sort of  prize.  One simply wants to imprison her and breed her like a common animal. This of course is built on the idea that women are not equal and exist to relieve sexual tension with, or birth children.  Women are bodies.  We are told at the beginning of the book, that werewolves don't form long lasting love based relationships, and that they remove their male children from their mothers at birth, because the werewolf gene is passed down via men. This excuse is even proffered as an explanation for Jeremy, the packs alpha's difficulty understanding what Elena likes.  She is a grown woman, and yet when he decorated her bedroom while she was in a cage dealing with the change, he gave her a princess theme.  Yes, no matter how old you are, every woman wants to be a princess.

I believe that Elena was essentially a strong protagonist, but the way in which the men around her saw her was absolutely sexist. At times, it made the book difficult to read.  I don't think that we should hide or erase isms, because they exist in the real world, but if they are going to be placed into a book, they should not be normalized and explained away.  So far, the Otherworld series is off to an interesting start however, in the books to follow, I hope to find greater emphasis on the fact that while sexism exists, that it is wrong.