Review of Vampire Empire - Book One: The GreyFriar by Clay & Susan Griffith 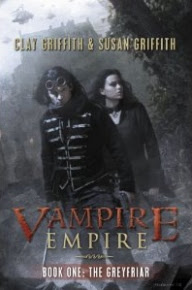 I was very drawn to this book the moment I learned that it was paranormal steampunk.  I could not fathom for a moment how these two genres could successfully be married.  I have long wanted to read steampunk and stumbling upon this book gave me the opportunity to deep my heels into a genre that has long been calling my name.

The world as we recognize it today is much changed in The GreyFriar.  In an even called the Great Killing vampires who had walked the earth as long as humans have declare war on humanity and end up taking over the northern part of the world.  Countries like England and America move into their colonies and set up stakes there because it is closer to the equator and vampires have deep trouble with the heat.  Over a hundred fifty years and pass.  It is the year 2020 and neither side is content with the stalemate.  The vampires see the humans as insignificant sources of food and the humans see vampires as parasites living off the blood of humans.  The vampires are confidant in their speed, sense of smell, superior eyesight, resistance to pain and difficulty being killed whereas the humans believe that their steam technology shall render them victorious.

The two are on the brink of war when Adele the Empress of the Equatorian Empire which stretches from India to South Africa was captured on a goodwill tour.  Along the way she meets the Greyfriar a man devoted to protecting humans from vampires.  He risks his life many times for her and the process love blooms between them.  This Greyfriar moves with incredible speed and is capable of feats that no human before him has been capable of, causing the reader to question if there is more to him than meets the eye.
I could tell you more but that would absolutely spoil this book for you.  The pace was quick and it was really well written and surprisingly despite a female protagonist few of the typical faults in urban fantasy are present.  Adele's mother died when she was a young child however, she has a loving brother and father.  Adele is strong though a little to quick to trust. I kept waiting for her to have a moment of spunky agency but the Griffith created her to be incredibly smart and at times, downright cunning.  I must say that I was pleasantly surprised by this.

Once again this is another heterosexist book.  I found myself wondering if the vampires ate all the GLBT people in 1870 and somehow humans made sure that no more were born since that time.  I know that a large part of the book is centered on the romance between Adele and the greyfriar but it would not have been impossible to insert a GLBT character had the authors really cared to be inclusive.

From a social justice perspective the other main issue was the treatment of people of colour.  They were all very peripheral to the story and when they did appear they were either dedicated to dying for Adele or were fixated on magic.  Yes, the magical people of colour big surprise.  It seems that religious artifacts and prayer are absolutely deadly to vampires yet, outside of a small group in Edinburgh,  it is only people of colour who hold onto what  the book described as useless superstition.  This makes it easy for the White leaders to discard their opinions.  I will share a small spoiler and share with you that it is ultimately Adele, the White empress who becomes the clear master of this magic.  Unfortunately, over time I expect that this will make the few people of colour in the book even less valued.

One of the best social justice messages in the book relates to class.  In her time in vampire territory, Adele learns that the poor have courage, and are more than willing to share their meagre belongings.  Simple fare is something that she would have scoffed at in Alexandria, she quickly learns to appreciate.  Over time you can see her appreciation of home spun clothing and the gift mode of exchange.  Though her life had previously been filled with riches beyond imagine, she learns that simplicity has its own richness and the reward for one's own labour is contentment and peace.  I really see this section of the book as an indictment on capitalism and how predatory it can be.  In a way it almost reminded me of Robert Moore's Utopia, as each person worked on the task best suited to their abilities.

I found this book to be an interesting read and I really look forward to continuing the series.  While the budding romance is extremely predictable, set against a backdrop of war, diplomacy, spies, magic and vampires it really is very compelling.