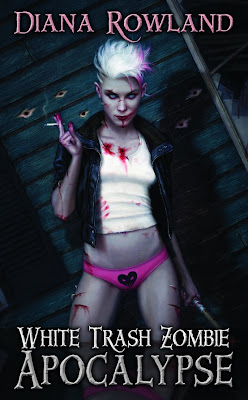 Angel continues to get her life together, aiming for her GED, continuing to work at a job she loves and even working on her shaky relationship with Marcus, setting new rules and aiming for a new beginning.

But the experiments on zombies are continuing – and her own creations come back to haunt her, whether she wants to be a zombie-mama or not. Whatever her misgivings about Pietro, she has little choice but to work with him, but in doing so she learns more about him and his organisation and reassesses how much she can trust him and how much she can forgive.

And then even mother nature conspires to make life more difficult and a real life zombie horde, just like in the movies (well, almost).

This is a story about Angel. There are a lot of other things going on, a lot of other things she’s involved in, but ultimately this isn’t a story about them. This is about Angel, her life, her friends, her family, her relationships. This is about how she fits into things, how she gets involved in things and how she lives. It’s an extremely character driven story.

That isn’t to say there isn’t a lot happening – a lot of really deep and fascinating things in this incredibly interesting world. Pietro continues to run his organisation that Angel dubs the “zombie mafia” and their competing experiments from a rival company and there’s all kinds of nuance and implications from that

But we don’t centre on all of this – we centre on Angel, how this affects her, how it puts demands on her and how she fits within these zombie organisations. After the events of the last book, Angel’s definitely very much involved even without her relationship with Marcus; but a disaster at her house is as important to her as Pietro’s plots and machinations because this is a book about Angel.

In terms of writing style, it’s perfect, it hits the sweet spot. We have enough description without being inundated by it, we have excellent pacing without being overwhelmed, all the elements in Angel’s life are covered in a well balanced fashion without her ignoring things you’d think she’d pay attention to. We get enough of Angel’s voice and thoughts to keep her centred and see her grow, without so much as to turn it into one long Angel monologue of angst and fee-fees. It’s balanced and paced well.

I love Angel as a character – she is so complex and she has grown so incredibly since the first book. But her growth itself has been so natural and has left its marks on her – because she has grown, she hasn’t just magically transformed. So she’s a character who is still assailed by doubts and low self-esteem – there are times when she looks around and can’t believe the company she keeps, that she’s too much of a nobody who can’t possibly be around these people. Or she thinks she can’t possibly do something – like pass her GED – because she has such a record and expectation of failure behind her. At the same time she’s a character who genuinely loves it and is almost surprised when anyone praises her skills, her intelligence and her competence because she appreciates the validation after a life with so little. And because she sees her own growth and likes to see it recognised in others. Angel has her insecurities but she recognises where and how she has grown. She knows she’s achieved a lot, she knows her growth is impressive and she is justly proud of that – and that’s so wonderful to see, a protagonist who is legitimately proud of who they are and what they’ve achieved and not for some grand, universe-saving act, but because she has turned her life around from where it was.

Which just adds more depth to her conflict with Marcus and his paternalism and why that creates such a rift between them – not just because treating her as incapable and weak and foolish is demeaning to her, but also because it preys on her insecurities and denies her accomplishments. It also may be why Pietro has managed to at least partially redeem himself in her eyes – he may keep secrets from her, he may play his own game, he may have used her – but he respects her throughout this book – her, her skills, her competence. He treats her as a woman full worthy of his time and attention, someone who is worth taking time out of his schedule to talk to or help. He’s a powerful, important man but still respects Angel.

I like Pietro’s evolution as well – he’s not just the conniving bad guy, but he’s certainly conniving and sometimes bad. But he’s bad with a purpose, he has a network of zombies that rely on him and he’s doing his best for zombiekind. Sometimes he is unethical in doing so and he definitely has an ends-justifies-the-means philosophy which opens up all kinds of debates and questions; do you use the genius even if they’re evil? Do you use research which has been obtained through unethical means? How much can you ask of your undercover agents? Do you tolerate local, short term evil in the hope of getting enough information to take down a larger evil? Pietro brings in a lot of shades of grey that presents some unique challenges for Angel as well as allowing her character to develop and further mature.

Speaking of complicated relationships – Angel and her father are a wonderful one. It’s not a happy relationship, not by any stretch, but both sides are trying. Angel’s turning her life around has prompted – or perhaps shamed – her father to do the same but even that is complex and nuanced and human. He’s trying, but it’s not easy and it’s frustrating and he does fail and both of them continue to get angry with each other because they’re not perfect people living perfect lives. And that failure prompts him to hide what he does achieve – for fear of it failing again. It’s deep and it’s nuanced. We even have a look at Angel’s school – and how utterly devastating it can be to have either an undiagnosed or unaddressed condition like dyslexia.

This all, of course, goes extremely well with the series ongoing analysis of class. Especially, the way people treat Angel, the mockery she faces for shopping in thrift stores (though she gloriously refuses to be ashamed and is quite proud of the fact she got such a great jacket so cheaply) but also after her disaster, just how few resources she has and how hard it would be for her to get back on her feet without friends. There was no real support for her and the steps to get what little she could were convoluted and difficult. Even beyond Angel’s own situation, there are class discussions concerning people who have recently been made redundant and living on such extremely low budgets.

It’s another excellent addition to an excellent series. Perhaps a bit descriptive at times, with a creeping need for repetitive internal musing, but still an awesome book covering awesome issues and above all with a truly excellent protagonist. This series is definitely up there as one of my favourites and I’m beyond glad we found it